Week 3 of Fortnite: Battle Royale’s Season 3 is here and with it come a new set of weekly challenges. You can complete this challenges in any week so don’t worry if you still haven’t completed Week 1 or Week 2 as you still have plenty of time to do so.

Like Week 1, this week we are following a treasure map to find a hidden emblem, much like we did in Week 1 with Dusty Depot.

Our challenge asks players to follow the treasure map at Snobby Shores but you can just skip that entirely and go straight to the stop, which is surprisingly very easy to find this time around.

The map puts the red X between two mountains with one of the mountains covered in tall trees. If you’ve been playing the game long enough you will actually recognize this mountain, making this map arguably easier to follow that the Week 1 one.

The two mountains in question are just southwest of Pleasant Park and the exact location is marked by the blue marker on the map.

Since this is the first day the challenge is available you may run into some problems landing there but if the players are nice enough they might actually let you complete the challenge before dying.

The Battle Star is found in the small clearing and all you have to do is collect and finish the match to complete this challenge. You’ll likely run into the most resistance in this area during the early game portion so you might even want to hang out somewhere else for a little bit if your goal is winning the match as well.

The rest of the challenges should be obtained naturally just by playing the game, other than the landing on different bullseyes one but have a guide for that one as well.

Season 3 ditches the medieval skins of the Red and Black Knights from Season 2 and instead launches us into space for the upcoming season. Purchasing the Battle Pass for Season 3 will get you an astronaut skin and we’re likely going to be seeing more space themed skins as we progress through the Battle Pass. 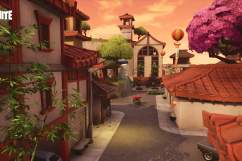