Kung Fu Factory developed the perfect mobile game to coincide with the release of Pacific Rim 2.

This newly launched Match Three puzzler/RPG hybrid is all about obtaining and upgrading Jaegers for duels with Kaiju beasts. As you match up different colored gem pieces, you’ll command your Jaeger to launch an attack and hopefully leave their Kaiju encounters victorious. You’ll need all the advice you can get in order to keep your Shatterdome base intact, which is why this extensive guide has been put together. It’s time to become the best Jaeger pilot they’re ever was!

Here are the top 10 Pacific Rim: Breach Wars tips, tricks, and cheats you need to know:

1. Try Matching up the Gems That Activate a Jaeger’s Specific Ability More Often

• In order to fill up the meter tied to a Jaeger’s special attack, you’ll have to match up the colored gems associated with it. It’s better to look for those matches near the start of a battle. Start prepping your abilities early so you’ll be able to use them near the finishing stretch of a fight. When your foe is enters their Critical state, that’s the perfect opportunity to finish them off with a special move.

• Now if you’re in the middle of a battle and you’re clearly dominating your opponent, go ahead and make some Loot Gem matches. When matched up together, you’ll get a bunch of extra rewards post-match. When involved in tougher Jaeger vs. Kaiju skirmishes, it’s better to focus more on making regular gem matches in order to win the battle at hand. But if the clash you’re participating in is nothing but a breeze, take a load off and get some loot while you have the upper hand.

3. Be Mindful of Class Advantages and Make Sure You DOMINATE!

• Before you hop into your next battle, make sure to click on the color coded class icon near the top left of your enemy. Take into account what it’s weak (and strong) against so you can choose the right Jaeger’s to take into battle. Jaeger’s who have a class advantage over their foe get a boost in gem damage. Here’s breakdown of each class advantage:

• The most exciting parts of Pacific Rim: Breach Wars’ battles are when you or your opponent gets dominated. Be mindful of the meter underneath the battle screen to see how close you or your opponent is to entering their Domination state. When a Kaiju hops up on you for some ground and pound action, you’ll have to make a series of matches that deplete the number total that pops up on the aforementioned meter. Of course you’ll need to do so in order to escape being dominated and experience any further harm.

4. Look for Big Matching Combos to Dish out More Damage

• Making three gem matches dishes out minimal to medium damage. But you should keep your eyes peeled for gem matches of four or higher. The higher the number of gems matched, the bigger the damage output from your Jaeger will be.

5. Play Through the Main Campaign to Increase Your Jaeger Fleet and Get Tons of Goodies

• The main campaign is meant to be a training ground that prepares you for the game’s other modes. You’ll obtain new Jaeger’s, plus a host of collectable items and currency as you triumph over the Kaiju’s you come across within that campaign. By the time you complete most of the main campaign’s missions, you’ll have a powerful fleet of Jaeger’s that will be strong enough to participate in Daily Patrol’s and PvP battles. You’ll become a bigger asset to any Faction you join thanks to your main campaign progress.

6. Take Your Strongest Jaegers Into Daily Patrol’s and Events

• If you’re looking to pick up more loot once you’ve finished a certain portion of the main campaign, try completing a Daily Patrol. Note – these missions can be taken on every eight hours. Make sure you take your strongest Jaeger’s with you into these battles – the most powerful one from your stable should be placed into the Point Group position. Make sure they’re fully healed before you take them into battle, too (the game usually notifies you that you can instantly heal them once you select an injured Jaeger).

7. When Your Enemy’s in a Critical State, Make a Four-Gem Match or Land a Special Attack

• Whenever a Jaeger or a Kaiju enters into their Critical State, now’s the time to properly defeat them. When an enemy is on its last legs, quickly put ’em out of their misery by landing a special attack or making a huge number of simultaneous gem matches. Pulling off your usual three gem matches while an enemy’s in a Critical State will do nothing but pick at their remaining health and give them a chance to make a comeback. When an enemy’s HP bar is blinking red, finish them off immediately!

8. Match up Strat-Gems With Jaeger’s Who Match the Appropriate Gear Color

• Whenever you take some time away from battles to manage your Jaeger, make sure to equip them with the proper pieces of gear. Say for instance, you have a Jaeger that relies on the use of blue gem powered special abilities. If you happen to have a piece of gear that boosts blue gem damage, make sure you equip it to that specific Jaeger. Any type of gear that increases the damage output of certain colored gems should be equipped for Jaeger’s who rely on that color.

• Credits are what’s needed in order to upgrade your Jaeger army. Progressing through the main campaign means you’ll get a healthy serving of that currency. After coming out on the winning end of a few battles, you’ll find that your Credits currency reaches into the thousands. Early on, the credit cost to upgrade any Jaeger falls into the hundreds range.

• Find the Jaeger’s you rely on for most battles and constantly upgrade them. You can also strengthen your Jaeger through Firmware Upgrades – you can find out what missions you have to complete in order to get all that XP by clicking on the medallions with roman numerals on them. You’ll also be notified of the XP you can gain rom certain items sold in the store. All of this can be done from the Jaeger upgrade menu.

10. Keep an Eye Out for Your Daily Mission and Achievement Rewards

• When you’re outside of battle, never forget to collect the rewards given to you via the completion of Daily Missions and Achievements. As a matter of fact, the game won’t let you forget since it puts up a red notification icon near the radar icon in the top middle section of the home menu.

• The currency you need to upgrade your Jaeger’s and keep your Shatterdome intact, plus a host of other beneficial items are given to you for completing an assortment of Daily Missions and Achievements. Make sure to pay a trip to the Depot to take advantage of all the newly acquired goodies you have. 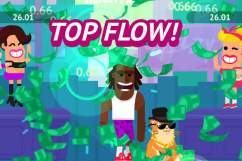