Tecmo Koei and Team Ninja launched the most successful Dead or Alive sequel to date with the 5th entry.

After first releasing on last-gen consoles, the fighter received numerous updates, guest characters, a host of returning combatants, and so much more. Once it transitioned from a full release to a free-to-play title, Dead or Alive 5: Last Round managed to become a major player in the fighting game arena. Come 2019, another round of impactful combat will erupt in the Dead or Alive arena. Familiar faces return, new fighters enter the fray, and even more, unique mechanics will be introduced to the long-running franchise.

With all that being said, it’s time to delve even deeper into everything there is to know about Dead or Alive 6.

Dead or Alive 6 is slated for release on Xbox One, PS4, and PC.

A bunch of notable characters from Dead or Alive’s past will be joined by several newcomers for the next tournament. The game’s director and producer Yohei Shimbori and art director Yutaka Saito spoke to IGN during a demonstration of the game and stressed that they want to focus less on the female characters’ “assets.”

Shimbori made it clear that “we wanted to make a more cool and mature Dead or Alive this time, and to that end, we made a conscious decision to make the characters less sexualized.” Saito went on to state that “the female characters are still attractive, as are the men, but first and foremost they are fighters. Our goal is to no longer force characters to look great at all times, but to leave that up to the natural flow of battle.”

Refer to the list below to see who’ll you be playing as once Dead or Alive 6 launches:

Dead or Alive has a penchant for featuring stages with a ton of background elements and other environmental items you can interact with. The Danger Zones and Mass Destruction mechanics will still be present, which are special portions of the environment (walls, cars, explosive elements, breakable floors, etc.) that can dish out heavy damage to fighters. One of the newer stage features making its debut in this installment is Rumble Danger. When a fighter is shoved into the crowd, the spectators standing around the ring area will push that character back in and leave them wide open for a follow-up attack.

Check out the list below to check out each stage and read up on their official descriptions:

– Dead or Alive Coliseum: Main stage of the 6th Dead or Alive Tournament. The latest stage specialized for martial arts. Watch out for explosions when the ring ropes are touched!

– The Throwdown: A stage set in a back alley, surrounded by a steel fence and brick walls. It feels dangerous but seems like a popular hangout spot.

– Forbidden Fortune: This new stage takes fighters inside the ruins of an old pirate ship. Old bones scattered on its deck speak more than enough for its history…

– Lost Paradise: The Lost Paradise, where a magnificent jungle is mixed with the decaying remains of man-man construction, has become a new stage for fighters. Yet there is something that seems strangely familiar about this setting…

– The Muscle: The new wrestling ring, built especially for the father-daughter duo, “THE MUSCLE.” With its fire pillars and electrically charged ring ropes, it’s made to max the levels of excitement and serve as the perfect stage for the most heated matches.

– Road Rage: A scene of a horrific highway traffic collision. Black smoke licks the sky above the piles of broken cars that threaten to catch on fire any moment, and trucks hang above at dangerous angles. Fighters with some imagination will surely find some way to use their conditions to their advantage.

– Unforgettable: Unforgettable is a new gallery-like stage made to combine a number of memorable locations from the previous Dead or Alive titles, including their fully-operational Danger Zones.

– Zero: A research facility built by M.I.S.T led by Donovan. What kind of research are they really conducting in this haunting place?

– Miyabi: A quiet street of an old Japanese town, captured during a calm afternoon hour. There’s a steep hillside hidden by a bamboo thicket, and if you push your opponent towards it just right…

– Hidden Garden: …they will crash right through and land on a secluded spot, surrounded by autumn-colored trees and a small pond. Why not add a little atmospheric magic to your fight!

– Chinese Festival: A corner in the China Town, with remnants of Spring Festival decorations visible all around. Beware, the ground is littered with unused fireworks, which may cause explosions if disturbed.

– A.P.O.: One of the hallways leading deep into the M.I.S.T. research facility. What dark secrets is it trying to hide?

Dead or Alive 6’s plot details are a bit mysterious at the moment. Refer to the official story description posted below to see where it may possibly lead:

After a sinister incident in a village…
Kasumi, a successor of the legendary Mugen Tenshin ninja clan, abandoned her clan and became a “runaway ninja,” secretly living in a hermitage in a mountain village.

Meanwhile, Helena Douglas, president of the new DOATEC, is involved in an incident…
The sudden —– of an individual with special powers sent shivers down her spine…

And yet another….
A so-called genius chuckles at a mysterious light emitting an aura…

Behind a quiet time, a sinister plan is set in motion.
The passing days are about to be unduly overturned due to an open desire.

As Kasumi writes to her mother, her pen overflows with hesitation.
…It’s not over yet.

The tried and true mechanics of Dead or Alive make their return for this 6th entry. The triangle system will still be prevalent – Strikes beat Throws, Throws beat Holds, and Holds beat Strikes. If you happen to land an attack of one type that has the advantage over another type, that advantageous attack will become a Hi Counter attack that dishes out more damage. As for the newer systems being introduced in the game, there’s the Break Gauge System. This new special meter can be relied on to utilize new maneuvers – the Break Blow and Break Hold.

The Break Blow is a super powerful smash attack that occurs when you parry an incoming strike. This move looks even more vicious since the camera zooms in on the face of the character who ends up getting hit. The Break Hold is an ultra hold maneuver that’s capable of parrying upper, middle, and lower attacks. Dead or Alive 6’s implementation of an Auto Combo is referred to as a Fatal Rush. Just by pressing the shoulder button repeatedly, any character can pull off a flashy combo that combines “four neatly animated punches and kicks.” 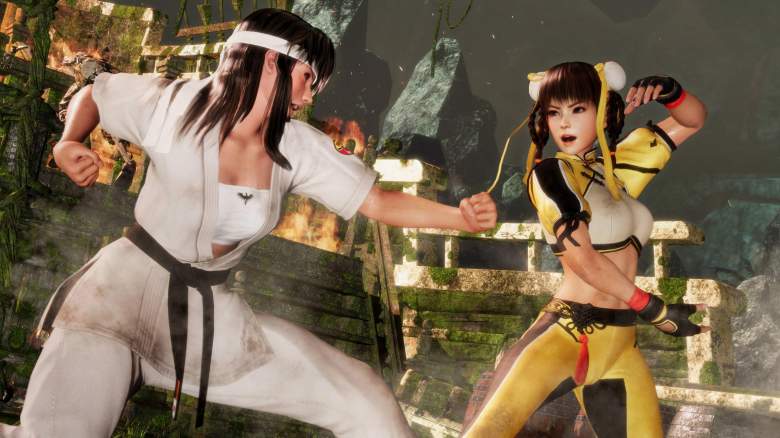 The game’s “Early Purchase Bonus” program (which is eligible for those who digitally purchase Dead or Alive 6 by March 14, 2019) also offers a few pre-order goodies. PS4 and Xbox One players who tap into this deal will get a bonus outfit for Kasumi. Purchasers of the game on Steam will receive that same bonus costume and access to Nyotengu. The Digital Deluxe Edition for Dead or Alive 6 offers up the following bonuses:

The Season Pass (available on March 1, 2019) will add two more characters to the roster in June 2019 – Mai Shiranui and another cast member from The King of Fighters. Both guest characters can also be bought separately. The Season Pass also comes with several costume packs – the “Dead or Alive 6 Happy Wedding Costumes Vol. 1 and 2″ and “Dead or Alive 6 New Costumes Set Vol. 1 and 2.” The total number of DLC costumes will come in at 62. Additional costumes will also be included for the two SNK guest characters, Nyotengu, and NiCO. All of the aforementioned Season Pass content will arrive sometime between March and June 2019.

Check out our review for Dead or Alive 6 right here.