The race track is still open and even wider than ever for 2019.

2018 offered a nice variety of off-road and on-road racers. The open-world locales of Forza Horizon 4 took gamers on a beautiful journey across the United Kingdom. Onrush flipped the genre on its head by focusing on team racing goals and throwing in some destruction to make that unique experience more worthwhile. And The Crew 2 transported aspiring racers all over America in cars, boats, and even planes. Alongside those releases were your traditional racing games that pushed gamers to cross the finish line in the fastest completion time possible.

Come 2019, a new batch of awesome racers will take over the track. Here’s a full list of the year’s upcoming racing games you need to keep an eye on.

The dirtier side of the road is home to the best motorbike athletes in the sport. Standout motocross stars, such as Jason Anderson, Eli Tomac, and Marvin Musquin are known to fans who’re in the know. These Superstars are joined by the rest of their competition in another round of digital motocross racing.

Monster Energy Supercross 2 is looking to keep fans of the sport pleased with a much-improved version of their Career Mode, rider customization feature, track editor, and multiplayer experience. The Compound hub is one of the main features that’s sure to make this sequel even more faithful to the sport it represents. If motocross racing is your main focus, then this pick is certainly a must-have.

Anyone who’s ever played a Trials game knows what to expect – physics-based zaniness, wild motorcycle stunts, and tough obstacle-laden tracks. Trials Rising looks to offer all of those things and more in a new entry that’s looking to up the ante.

Now you’ll go on a global adventure and brave the dangers of tracks placed within the Eiffel Tower and even Mount Everest. A new mode called “Tandem Bike” will let another player join your mayhem-filled playthroughs as one of you controls the balance of the bike while the other handles its power. If you’re looking for some single-player madness and a nice dose of local multiplayer insanity, Trials Rising should fit the bill quite nicely.

For those looking for some dirt road filled rallying and rallycross racing, Dirt Rally 2.0 is set to give you what you desire. Codemasters knows a thing or two about crafting quality racers, which is why they’re bringing their genre expertise to the next entry in the Colin McRae Rally racing game franchise.

Dirt Rally 2.0 will take players all over the globe as they look to become the best racer to ever hit the (dirt) road. Fans in the know can look forward to seeing their favorite vehicles and tracks from the FIA World Rallycross Championship during their Dirt Rally 2.0 excursion. With improvements to the “My Team” mode and tutorials, experts and beginners alike will be able to experience the best that this rally racer has to offer.

The year: 2030. The World Federation Racing Championship is ready to embrace the introduction of hybrid cars. In order to test this latest automotive technology, a grand racing tournament has been put into place – “Xenon.” This international racing Grand Prix focuses on nothing but wheels in an era that’s dominated by flying cars. This interesting premise backs up Xenon Racer, an arcade racer that focuses on high speeds and tight drifting. This under the radar release has the potential to be a hit in the making. The bright visuals, high-octane racing, and impactful crashes are what Xenon Racer fully embraces.

Three Fields Entertainment knows a thing or two about in-game destruction. The developers who make up Three Fields are celebrated for their work on the Burnout franchise, a collection of racers that fans still talk about to this very day. The theme of danger has made their previous releases appeal to fans of unbridled mayhem. That element of danger is being represented once again by the spiritual successor to Burnout, Dangerous Driving. High-octane races, epic crashes, heart-stopping near misses, and multiplayer mayhem make up this racer’s full content suite. Burnout fans now have something new to crash and burn-in. 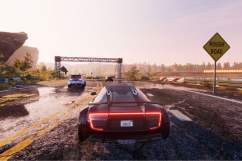 Sumo Digital is doing things a bit differently this time around. Instead of offering the Sega fanbase a third Sonic & Sega All-Stars Racing, the development studio is going all-in on Sonic and his furry friends. Team Sonic Racing pretty much takes the team concept introduced in Sonic Heroes and adds cars to the bright and bubbly mix.

All the usual aspects of kart racers are present and accounted for here – boost panels, weapons flying everywhere, and cute quips from everyone on the track. Each character is attached to a different class, which adds an extra layer of strategy to your team construction before each race. Team Sonic Racing offers up 21 tracks in total, which means you’ll have plenty of opportunities to tear up the road as the blue hedgehog and his assorted cast. 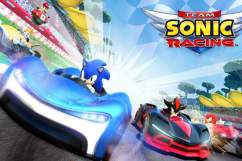 The next annual installment in the popular motorcycle racing series looks to be a summer hit for fans. Moto GP 19 comes with all the expected bells and whistles the series is well regarded for. The 2019 season can be experienced in full as you make your way through different cup classes with real-life racers. Among the game’s newer features are a much improved AI system, deeper customization features, Race Director mode, and improved online capabilities thanks to dedicated servers. And for diehard MotoGP fanatics, you can experience the sport’s most legendary moments through the Historical Challenges mode. MotoGP 19 is everything fans have been looking forward to and more.

Activision has been on fire when it comes to remakes of classic platformers. Crash Bandicoot was first up, followed by Spyro the Dragon’s platforming comeback. Now Crash is getting another big return with the much-anticipated release of a Crash Team Racing remake. Crash Team Racing Nitro-Fueled completely revamps the game’s original visuals and makes them shine brighter than ever before.

All the classic characters, tracks, and modes you’ve come to love from the original make their return alongside the much-requested addition of online multiplayer. Gaming’s favorite orange marsupial is getting, even more, shine these days. With the release of Crash Team Racing Nitro-Fueled, it looks like he’ll stay on people’s minds all summer long. 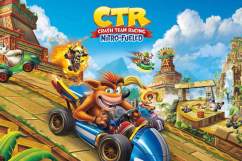 It’s a pretty rare sight to see games dedicated to the Monster Trucks scene. Enter THQ Nordic and Rainbow Studios. They’ve partnered together to release a stunt racer that’s the perfect playable lead-in to the Monster Jam World Finals. Fans can look forward to hopping into the driver’s seat for 25 iconic trucks as they pull off stunts, race in the great outdoors, and destroy anything your heart desires. Monster Jam Steel Titans will push you to your very limits and push you to your goal of graduating from Monster Jam University.

In 2019, Codemasters is doing a solid for hardcore Formula 1 fans. This year’s installment of the ongoing F1 sim racing franchise is arriving right alongside the real-life Australian Grand Prix event. Which means fans get to act out the amazing driving sequences they’ll watch during the current Formula 1 season. F1 2019 looks to be the most satisfying entry to date. Thanks to a two-year development cycle, we’re sure this installment will offer even more substantial upgrades in the career mode, vehicle selection, and real-world circuit selection. F1 2019 may turn out to be Codemaster’s biggest racer of the year.

So one of the toughest racing series in the world is the FIA European Truck Racing Championship (ETRC). What makes it so challenging, you ask? Well, the fact that the racing competitions revolve around controlling massive trucks. Bigben Games wants to make it a little bit easier for fans of the racing league to hop into the fray with this 2019 truck racing sim. FIA European Truck Racing Championship places you in the driver’s seat of five-ton trucks as you compete against rival racers on 45km long tracks. With 45 official trucks, eight real-world circuits, and all 20 championships and teams from the ETRC, this brand new truck racing sim looks to be the go-to game for FIA fans.

The official World Rally Championship gaming franchise is finally making its way back to the road! WRC 8 is looking to make all the necessary adjustments that its fans have requested since the previous entry. Along with those welcome changes comes a feature-rich package that includes 100+ stages to race on and 14 countries to race in. WRC 8 will be the ultimate sim racer for those looking for top-notch realism in their racing games. This entry’s dynamic weather, eSports implementation, retooled career mode, and other features make KT Racing’s next release one to watch.

Touring Karts offers an incredibly immersive VR experience that lets you enter the animated world of a kart racer. Besides all the first-person racing you’ll be doing, your onscreen avatar will act out most of the commands you pull off in the real world. Looking back to shoot off an obstacle, sipping on a drink mid-race, and pulling off sick drifts can all be accomplished while a VR headset is sitting atop your head. Don’t worry if you find yourself getting a case of the bubbleguts in the first-person mode, by the way – Touring Karts offers a viewpoint free of dizziness and a classic third-person mode as well. This VR racer shouldn’t be missed.

Buy a PSN Gift Card here so you can digitally purchase Touring Karts.

If you happen to follow the exploits of all the professional racers who compete in the NASCAR racing series, then you probably look forward to the league’s simulation games. The NASCAR Heat franchise has picked up the mantle for the stock-car racing series lately and done an admirable job of pleasing its fanbase. NASCAR Heat 4 is building upon the solid mechanics featured in past entries and introducing even more worthwhile modes and features. One of those major features is the opportunity to start in four different racing series at the start of the game’s Career Mode – dirt, trucks, the Xfinity Series, and the Monster Energy cup series. NASCAR Heat 4 is ready to take the top position and lap the competition this September.

GRID has finally returned to the race track! This unexpected series reboot is set to retool and improve upon everything that was featured in the original installment. From the looks of things, car damage will play an even bigger part in how you’ll handle your car amongst the pack. 70 cars will be on hand as you drive through a myriad of tracks that transport you to 12 global locales. F1 racing buffs will be happy to know that the legendary Fernando Alonso will lend his expertise to the game as a Race Consultant. Not only will you get to hop into his signature Renault R26 ride, but you’ll also get to race the man himself. GRID’s massive suite of modes and features make it a worthy investment for racing sim fans. 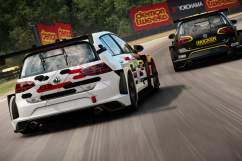 The Need for Speed franchise has delved into the cops vs. street racers concept on multiple occasions. For Need for Speed Heat, fans will revisit that theme in an entirely new neon-colored locale. Palm City will be your new high-speed hub full of day and evening challenges that affect your storied reputation amongst the competition. And of course, you’ll acquire sweet rides ripe for further customization and embark upon a new game mode called “Speedhunters Showdown.” Need for Speed Heat compiles the best parts of EA’s iconic racing game series into a new current-gen package. 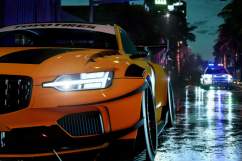 And here’s a few racing games that were released years prior, but are now making their way to certain consoles for the first time in 2019: