The first new hero for Apex Legends may have been leaked on social media. Named Octane, this legend has been making the rounds throughout social media and the official Apex Legends Reddit page.  But one has to wonder if there is any truth behind this hero or if it’s just an elaborate ruse. Keep in mind, we cannot directly verify the information presented below so take everything with a grain of salt. We will simply be walking through the evidence that is starting to spread like wildfire.

First posted on Instagram by @childz_pl4y, whose page is no longer available, two photos of Octane were leaked. The first posting about Octane from childz was 8 days ago where the leaker said to check out his Instagram for pictures of the character and his abilities. After that, the first images of Octane released which can you see below. While it certainly looks real, it’s more than possible for someone to be able to fake it. 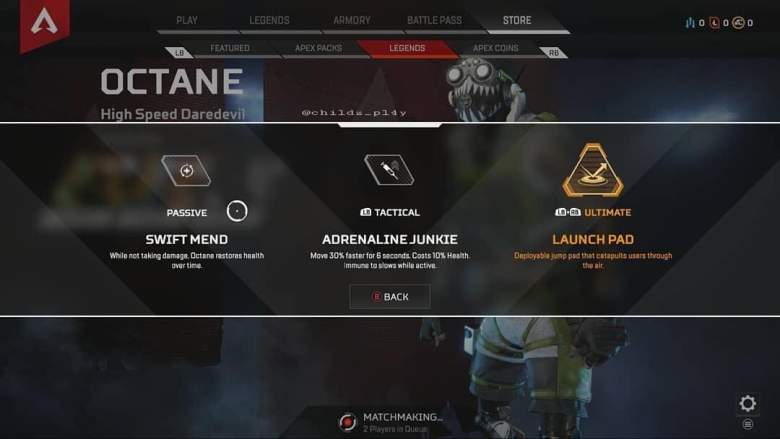 The only outside evidence supporting the theory that this is true is a datamine that revealed Octane’s ultimate ability, the bounce pad. This leak was first posted days before childz made the claim of having images of Octane. The name Octane was also leaked days before childz posted his first screen cap of this hero. It’s possible that childz was simply adapting what was shown in the datamine into this photo. Some users on Reddit have even made fake Apex Legends hero pages to show how easy it would be to craft.

Again, we strongly advise you don’t directly believe any of the information surrounding Octane. There’s simply not enough evidence to directly conclude that this is a legitimate photo nor has the leaker shown a proven track record of getting info like this right. In fact, when we looked through childz’ post history on Reddit it was just a bunch of promotions surrounding this specific leak.

If the information is true then Octane seems like a potent hero, especially if the passive is correct. However, we won’t speculate on his impact in the game until more details comes out showing that this is, in fact, the real legends’ kit.