A Power Rangers: Battle for the Grid review code was provided by the publisher.

When putting together a list of halfway decent Power Rangers games, there aren’t a lot of picks to choose from. Ignoring the cheap cash-ins is easy enough to do, but finding the diamonds in the rough is a pretty tall task. The 16-bit beat-em-ups and fighters hold a little bit of appeal due to 90’s nostalgia, but they’re ultimately nothing more than mild diversions that don’t last long in the replay value department. What’s shocking is how surprisingly fun and addictive Power Rangers: Legacy Wars is. As a mobile game, the multitude of Rangers and assorted characters from series past mixed in with the shockingly deep combat mechanics made the mobile game a smash hit. Building on the foundation set up by that release, nWay has transported the experience to consoles in the form of a fast-paced 3v3 fighter.

Power Rangers: Battle for the Grid falls into the category of easy to play and much trickier to master. Move inputs are simple and don’t require quarter-circle inputs or any other traditional fighting game controller hand motions. While it may sound like this fighter has nothing deeper to offer to the more hardcore fighting game scene, you’d be wrong to stick to that sentiment.

Spend a few hours in the training mode and you’ll come to discover a chaotic fighter that will evoke memories of Marvel vs. Capcom 3’s onscreen madness. The presence of assists, super moves, and oversized attacks from three selectable Megazords/behemoths deepens the game’s battle strategies even more. Running online sets and trading wild custom combos with fellow expert players is a regular occurrence in this fighter. And it’s always an awesome revealing experience.

Visually, Battle for the Grid looks cheap. This comes as no surprise since this is a budget title that lifted the graphical style from its mobile predecessor. This still doesn’t excuse the game’s plastic look that doesn’t do a whole lot to lift up the characters and stages you’ll do battle on. It’s not outright horrible, but it’s just not up to par with the huge array of fighters currently available. Audio-wise, there’s nothing really to celebrate either. The music is generic and the sound effects are as basic as they come.

What Battle of the Grid lacks in graphics and sound, it makes up for it (slightly) in the form of playable modes. There’s your basic arcade mode ladder with light story elements added in. Plus there’s your usual gamut of online multiplayer modes, which are Ranked and Casual. The game does a good job of teaching you the in’s and outs of its simple and advanced systems thanks to the Tutorial and Training modes. As for the playable roster, the nine character offering is a huge letdown. While there are iconic characters to choose from, the small number of Rangers and villains to choose from is disheartening. Knowing that the season pass will only add three more fighters to the fray doesn’t really elicit any excitement about filling out the roster to a respectable size, either.

In its base launch form, Power Rangers: Battle for the Grid is severely lacking in several areas. The small roster, underwhelming visuals and audio, and overall cheap feel are all disappointing. But what keeps this fighter from being a complete waste is the incredibly fun and rewarding gameplay.

Diehard Power Rangers fans and gamers who appreciate team-based fighters will take to this game and enjoy its efficient combat mechanics. This fighter would have been even more worthwhile if a bigger budget and more development time was a part of the equation. As it is now, Battle for the Grid is a fun fighter that’s hampered by its incredibly low budget feel.

Our Power Rangers: Battle for the Grid Review Score: 6 out of 10 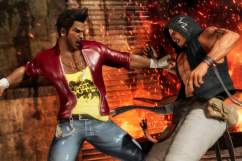 All Upcoming Fighting Games of 2019