RAGE 2 isn’t concerned with telling the player a deep story. It’s not looking to chase the latest multiplayer trends or offer anything close to a compelling lead character. All RAGE 2 cares about is killing enemies is the most creative ways imaginable and it’s damn good at it. Taking heavy influence from the likes of DOOM, Bulletstorm, and Mad Max, RAGE 2 is an explosion of color and body parts.

The story picks up after the events of the first game, with life now returning to the battered wasteland. You assume the role of an elite soldier known as a Ranger, who is tasked with stopping a new ruthless military power known as The Authority. With most of your comrades killed in an attack, it’s up to the player to save what’s left of this broken world.

Despite flooding the game with lore filled Data Pads, RAGE 2 doesn’t spend a lot of time fleshing out its characters or world. Don’t expect any radical departures from the tried-and-true end of the world caricatures we’ve seen dozens of times. From the gruff, no-nonsense sheriff to the eccentric gameshow leader, RAGE 2 shoves every possible post-apocalyptic trope it can into one game.

While this on its own isn’t a bad thing, we are never given a lot of time with the core cast. They simply serve as hubs to get missions from and shepherd the player to the next gory action sequence. This makes RAGE 2 feel rushed, with key characters appearing one instant and vanishing the next. Unfortunately, you can see nuggets of genuinely engaging ideas being buried under mountains of pink containers and dead bodies.

Thankfully, the world fairs slightly better, with RAGE 2’s remarkably large map peppered with a variety of different points of interests. Even though there is very little motivation to seek some of these places out, there is some genuinely entertaining visual storytelling going on. Finding a packed bar overlooking a race track or a city buried in mountains of sand gives RAGE 2 a sense of life. There’s always something new around the corner, even if developers Avalanche Studios and id Software are determined to coat everything in pink.

Of course, you’ll be too busy blasting bandits to bits with a unique arsenal of guns to invest in the larger world and story. Boasting 8 firearms – 9 if you purchased the Digital Deluxe version – each one has a primary and alternate firing mode. While some offer different methods of destruction, others work in tandem with the primary fire. For example, the Firestorm Revolver launches bullets that stick to the target, which can be detonated with the snap of a finger.

It’s this synergistic design that makes the combat not only feel fresh but always exciting. There are a ton of ways to slay your foes and half the fun is figuring out new ways to stylishly take down a group of baddies. Weapons can also be upgraded via spending in-game currency and rare mods, allowing you to enhance or alter their effects. This gives the player a ton of freedom in how they approach battles, allowing them to invest in their favorite guns. 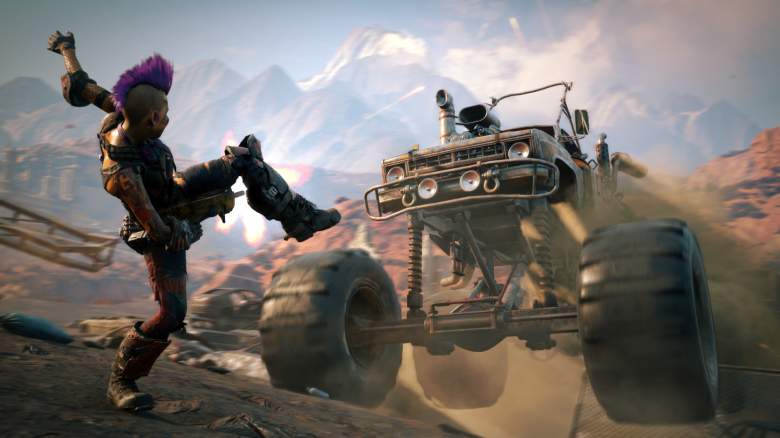 Supporting this is a suite of powers that be utilized to disrupt, execute, or increase the potency of your attacks. One skill lets you rapidly dash around the battlefield while another produces a barrier that blocks all incoming fire. My personal favorite is the Vortex which creates a miniature black hole that sucks enemies to the epicenter before launching everything into the air. It’s comically over the top, but almost everything in RAGE 2 is.

However, you won’t just be waging war on foot, as RAGE 2 heavily relies on car combat. While you can drive a multitude of different vehicles, your main ride is a tricked out truck called the Pheonix. With minimal fast travel points, you’ll end up driving a lot over the course of the 10-15 hour campaign. During your journey, you can participate in races, take out roaming convoys, or perform death-defying stunts

Tying everything together is a rather short campaign and a ton of side activities. Missions typically consist of just blasting your way through corridors of angry mutants until you are told to interact with something. Your enjoyment of these quests largely depends on your willingness to experiment with the combat systems. Enemies pose a decent challenge on normal, but nothing that requires a ton of planning.

RAGE 2 is far more concerned with its optional quests like clearing out bandit camps, participating in the Mutant Bash gameshow, or clearing out nests of mutants. This is where RAGE 2 is at its best. Small, bite-sized activities that test your creativity and dexterity in unique environments. Yet, if you don’t enjoy this ballet of bullets then there’s simply not enough reward content available. Thankfully, the combat is damn near perfect, so any activity that allows me to gun down my foes is more than welcomed.

Surprisingly, RAGE 2 also suffered from some performance issues on the PS4 Pro. The game’s menu system freezes constantly, making the game feel like it’s on a delay. I also had the game’s audio drop out multiple times and once instance of my blood-soaked Ranger becoming trapped under the environment. Visually, RAGE 2 is absolutely gorgeous, mainly thanks to the abundance of life and color. Gone are the endless shades of brown with every region acting as an entirely different biome.

Not only is this a great visual indicator for where you are, but it helps alleviate a sense of repetition as you explore the world. The waterfall laden jungles of The Wilds gives off a sense of hope; while the sand coated cities of the Dune Sea stand as ominous reminders of how far civilization has fallen. This terrific art direction allows RAGE 2 to differentiate itself from similar games but does highlight just how uninspired the core story is. 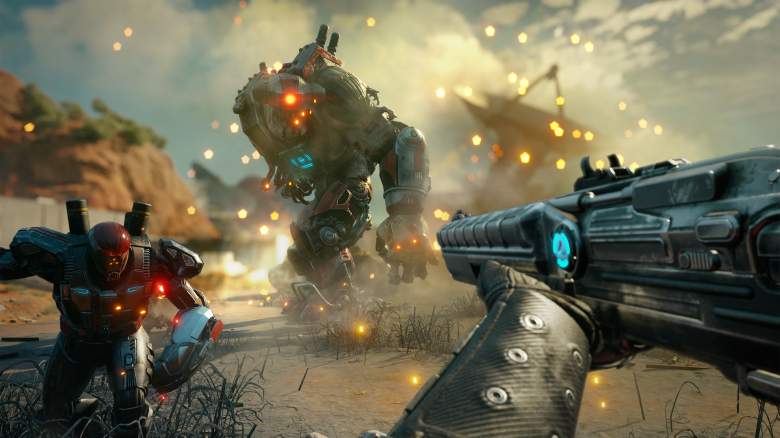 Your enjoyment of RAGE 2 will heavily depend on how much fun you have with the game’s combat. Even with the boring story and blad characters, the moment to moment gameplay is some of the best in the FPS genre. RAGE 2 is a bright spectacle set in a very dangerous and vicious world. If you embrace the chaos there’s a lot of fun to be had, but for those wanting a deep, narratively engaging experience I suggest you look elsewhere.

RAGE 2 is all about blowing s@%# up and there’s nothing wrong with that.