The sequel to The Legend of Zelda: Breath of the Wild has been unveiled and it poses a ton of new questions. Defined as a sequel, figuring out when Breath of the Wild takes place sounds easy enough, but this franchise has a long-running, complicated story. Broken up into three separate narrative arcs, The Legend of Zelda games split after Ocarina of Time. This can make following the general timeline tricky, especially if you aren’t familiar with these games’ wacky and often complex lore.

Keep in mind, we are speculating as to when and what timeline the Breath of the Wild sequel will fall under. It took nearly a year for Nintendo to even remark about where the original Breath of the Wild fits into and even then their answer wasn’t clear. It’s pretty obvious from the trailer that both Zelda and Link haven’t really aged, which suggests that this sequel takes place only a few months or years after the original.

Here’s where things get complicated. Breath of the Wild doesn’t officially fit into one of the three timelines. Publication Famitsu asked the game’s producer Hidemaro Fujibayashi  and director Eiji Aonuma where the title fit into the overall story. The duo responded with the following:

Eiji Aonuma, series producer: “Well of course it’s at the very end. But, I get what you’re asking, it’s which timeline is it the end of?”

Hidemaro Fujibayashi, director: “That’s… up to the player’s imagination, isn’t it?”

Nintendo clearly wants Breath of the Wild to be the ending for each of the three timelines, bringing the full story back into a single chronological tale. However, there are hints of which of the three timelines had the most influence on the story. One of the main species that players encounter in Breath of the Wild are Koroks. These were introduced in The Wind Waker which falls under the adult timeline of Ganon being sealed away. 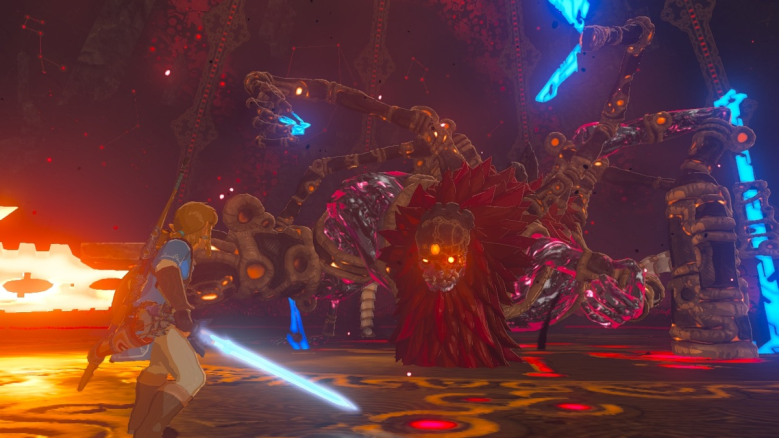 Another hint in Breath of the Wild is the corpse found under Hyrule castle. At first glance, this appears to be Ganon, but there is a very real possibility that this actually Demise from The Legend of Zelda: Skyward Sword. Upon his defeat, this Demon King curses that we will return via an incarnation, which is supposed to be Ganon.

However, in the trailer, we can see that the corpse does resemble Demise. He is certainly the right height and Demise had long red hair in Skyward Sword. The body is also wearing a red robe just like Demise does and the golden jewelry piece is covering the X mark on his forehead.

On the other hand, this could be Ganondorf who has been seen multiple times in the past wearing forehead jewelry. We can clearly see the crest of the Gerudo – Ganondorf’s race – hanging from his neck. Given the same energy that emanated from Calamity Ganon is coming from this body, it’s possible this is the source of that being’s power.

Regardless of who Zelda and Link stumble across, we know that the Breath of the Wild games ties together all three timelines. While this may open up a ton of plot holes, it certainly makes following the story easier going forward. Sadly, we probably have to wait a very long time before this game is released to learn the truth.