It has been five years since we stepped into the treasure obsessed shoes of Borderlands‘ Vault Hunters. Since then, the loot-shooter genre it helped define has exploded in popularity. With the highly anticipated third core entry only a few weeks away, we got a chance to play five hours of Borderlands 3 and speak with co-lead writers Danny Homan and Sam Winkler. Here’s what we learned during our brief tour on Pandora.

(Discloser: We were provided lunch and a 1 TB hard drive.)

The majority of our time was spent on the non-binary robot FL4K. Like the Mecromancer class from Borderlands 2, FL4K primarily focuses on an NPC companion in combat. You will have access to three different animals each of which boasts their own unique skills and buffs. Selecting the dog-like Skag gives FL4K a 5% damage increase while gun toating Jabber gives this bot’s movement speed a boost. My personal favorite was the Spiderant since it allowed FL4K to passively regenerate health in and out of combat.

All three of these beasts will wander alongside FL4K regardless if you’re fighting or not. They each possess their own health bar, so you’ll need to resurrect them if they fall in combat. You can also designate specific foes for your companion, allowing a more tactical approach to firefights. It’s a nice layer of strategy that is usually absent in a game built around mindlessly gunning down everything that crosses your path.

FL4K also as three action abilities, each of which is on a moderate cooldown. They can either briefly turn invisible, turn their companion into a giant irradiated monster, or throw out a swarm of firey, flying Raks. As you progress through FL4K’s skill tree these abilities will enhance, opening up unique synergies and powers. Despite not getting a chance to experiment with everything in FL4K’s arsenal, he is by far one of the most entertaining Vault Hunters to play in Borderlands’ history. 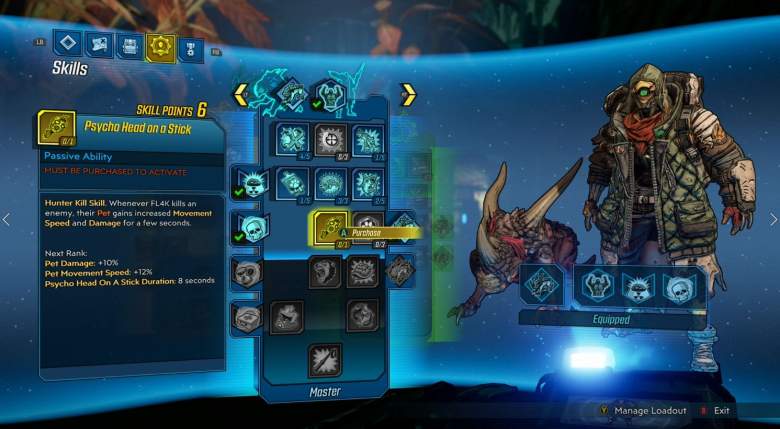 One of the new characters introduced is the navigational A.I., Balex. Voiced by musician/actor Ice-T (Yes, really) Balex tasked us with taking down an evil combat A.I. that had taken control of a crashed spaceship. Located on the swampy Eden-6, we got to experience this mission with a higher level Vault Hunter. This is when Borderlands 3 really began to click. Battles were more demanding, forcing me to constantly swap through different elemental weapons. Understanding how to effectively use your build is critical since enemies are far deadlier this time around.

Movement has been updated to include sliding and mantling, which makes traversal much easier. Players can also drive (and upgrade) a collection of deadly vehicles both new and old. Even though these are terrific for thinning out hordes of bandits, they have atrocious handling. This may improve as the game progresses, but almost every car we got behind the wheel of felt unresponsive and frustrating to pilot.

For all the fresh faces and mechanics there was a rampant sense of familiarity hidden under Pandora’s blood-soaked sand. Borderlands 3 isn’t trying to reinvent the wheel, but polish it to a blinding shine. For all the new features and characters, the rhythm of blasting enemies, upgrading your character, and obtaining new guns is still the game’s foundation. This is very much a Borderlands game and Gearbox hasn’t strayed away from what made the previous titles so popular with fans.

Standing in your way of glory is an army of bandits serving under the influential eyes of the Calypso Twins. By using social media, this deadly duo has rallied all of the bandit factions together into a massive, unified fighting force. Unlike other Borderlands villains who typically harass the player off-screen, the Calypso Twins’ presence is immediately felt. The duo is constantly broadcasting their twisted propaganda throughout the universe via live streams, posters, and religious iconography. 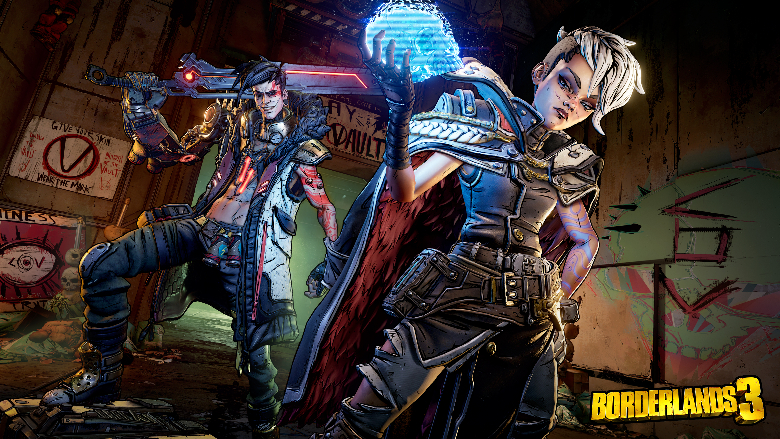 But the Calypso Twins face a greater foe than your Vault Hunter, as the shadow of Borderlands 2’s Handsome Jack still looms over the franchise. “Where he was this single tyrant that we could focus on the Calypso twins present a really interesting opportunity to show off this crowdsourced psychopath army,” Borderlands 3 co-writer Danny Homan told me. “Having them be siblings was a really interesting story mechanic for us. They have this dynamic where Tyreen’s the diva and she’s in charge on stage all of the time. Troy is kind of in the shadows doing the statecraft and that sort of thing.”

Homan explained that their “dynamic is fluctuating and changing” throughout the course of the game. We got to see a bit of this during the demo, as Tyreen is clearly the stronger of the two. She clearly bullies her brother to some degree and their relationship seems to be built on flimsy ground. Going any farther would delve into a solid early game twist, but it’s clear that Gearbox Software is not trying to one-up Handsome Jack. Sure, the duo constantly makes jokes, but they are far more threatening than Jack. They’re terrifyingly strong and aren’t just the face behind an evil corporation.

Yet, defining the Calypso Twins wasn’t Gearbox’s only challenge, as they were tasked with balancing a massive cast of colorful, beloved characters. “That was a big conversation that we had because we have a vast menagerie of characters. For each of them, there is a loyal fanbase, not just out in the world, but at Gearbox.” Homan elaborated: “If we try to inject every single character into it we’re going to end up doing none of them well. We made sure that any character that was going to show up in the main Borderlands 3 game had a distinctive impact on the main plotline and went through their own storyline.”

But in a genre where the endgame experience is king, Borderlands 3 will need more to thrive well after the credit roll. “We have something called Mayhem mode that unlocks after you finish the main storyline,” Homan revealed. “It’s this really fun, really chaotic mode that really twists up the combat encounters you get as you go through the galaxy.” Homan also told me that they have four large story-focused DLCs and fans can expect the return of True Vault Hunter mode.

Both Homan and Winkler didn’t go into any more detail about the endgame content, except that they assured me there would be plenty of Borderlands 3. With games such as The Division and Destiny 2 embracing the post-game content, I worry that a single new mode won’t be enough to keep players engaged until the first piece of DLC drops. There was no word on any raid bosses such as Borderlands 2 Terramorphous or if they were including anything similar to dungeons.

For better or worse, Borderlands 3 is more of the same. While this isn’t a bad thing, players shouldn’t expect any radical changes to the main formula. This is the same Borderlands you know and love, which is exactly what I was hoping for. Despite having some concerns about the endgame content, I look forward to getting my hands on the full game.

Damn it feels good to be back on Pandora.