We’re only a few weeks away from Destiny 2’s upcoming expansion Shadowkeep, so it’s time for players to start preparing. There are a lot of ways that users can get ready for this massive content drop, but one of the most important is gathering an assortment of weapons. Shadowkeep will bring a number of sandbox changes such as buffed Scout Rifles, Exotic nerfs, and changes to how damage stacks. Because of this, some strategies may not be valid in the new PvE and PvP meta.

Here are 10 weapons we suggest grinding for before Destiny 2’s Shadowkeep expansion releases.

With the Rally Barricade and Lunafaction Boots nerf incoming, the Izanagi’s Burden may become the go-to boss DPS weapon. Capable of doing insane amounts of damage, this sniper rifle can tear apart a boss’ health bar in seconds. Being able to quickly reload a Honed Edge round should let a competent team of players take down powerful enemies with little issue. Additionally, the Izanagi uses Special Ammo, so you won’t even be taking up a heavy slot with this gun!

We strongly recommend getting the Izanagi’s Burden catalyst before Shadowkeep since it greatly increases the damage done by this Exotic’s unique perk. You can obtain the catalyst by completing the Heroic Menagerie after fully upgrading your Chalice of Opulence.

While getting the catalyst can be a bit of a headache to obtain, it’s absolutely worth the effort. Increasing how much damage the SIVA nanites do can make a world of difference when it comes to wiping out individual enemies.

Scout Rifles have always suffered in Destiny 2’s PvE meta, but these long-range weapons will be getting a buff this October. Because of this, we suggest grabbing a decent scout rifle for either PvP or PvE. There are a ton of terrific choices, but we landed on the Calusea Noblesse, Night Watch, and Vouchsafe for our top picks. Not only are these Scout Rifles consistent, but they have some terrific rolls – especially if you nab a curated version.

Of the three, our personal favorite is the Night Watch which can roll with perks such as Overflow, Outlaw, Rapid Hit, Multikill Clip, Ramage, and Demolitionist. All of these are terrific perks that can greatly increase the killing potential of this weapon. With the recent changes to The Reckoning’s loot drop rate, we highly recommend grinding for this weapon.

For Shotgun lovers out there, consider grinding for either the Last Man Standing or Emperor’s Courtesy. While there are some terrific shotguns that roll with the Trench Barrel perk, these are the only two that can come with One-Two Punch. This perk is quite potent, especially when paired with a melee Exotic such as Liar’s Handshake or Winter’s Guile. If you enjoy punching enemies to death then obtaining one of these shotguns with this perk should be a must.

Even though there’s a good chance you already have this weapon, we still feel the need to include this fusion rifle. Perhaps the best PvE fusion rifle in the entire game, the Loaded Quest is capable of massacring most enemies you come across. It’s Reservoir Burst perk makes clearing waves of foes supremely easy. Slapping a Major or Boss Spec on this weapon also lets you absolutely tear apart stronger foes.

My personal favorite weapon, the Sole Survivor is one of the rewards you can earn from The Reckoning. Unlike other snipers, this rifle can roll with the Firing Line perk which increases your precision damage by 25% if you’re near 2 or more allies. Combining this with either Fourth Times the Charm or Triple Tap makes this a DPS machine. Tied specifically to The Reckoning, we strongly recommend grinding for this weapon. With all the sandbox changes, there’s a good chance that potent snipers like the Sole Survivor will become top tier weapons in Year 3.

Most problems in Destiny 2 can be solved with a god roll hand cannon. This weapon archetype has been absolutely dominant in both PvE and PvP. There are a number of terrific hand cannons, but the ones we recommend are the Black Armory’s Kindled Orchid, Menagerie’s Austringer, and The Reckoning’s Spare Rations.

These three can roll with some terrific perks that will support virtually any playstyle. Currently,  some of, if not the best hand cannons available in Destiny 2, you’ll want to snatch one up for PvP or PvE before Shadowkeep. Of the three, we recommend Austringer if you’re short on time since the Chalice of Opulence can help mitigate some of the bad rolls. Plus, with the Community Challenge finished you’ll have even more chances at getting a god roll of this gun.

With a possible nerf incoming for the Spike Grenades perk, the Wendigo GL3 may ascend to the best grenade launcher in Destiny 2. Its Explosive Light perk can absolutely tear apart enemies since you can hold up to 6 charges. Combine this with Weapons of Light, Well of Radiance, or Tractor Cannon to get a massive damage boost. Previously tied to a very lengthy quest, Bungie has shortened the requirements so you should have no issue grinding for this gun! Make sure to obtain this launcher, because we don’t know how much of a hit Spike Grenades will take. 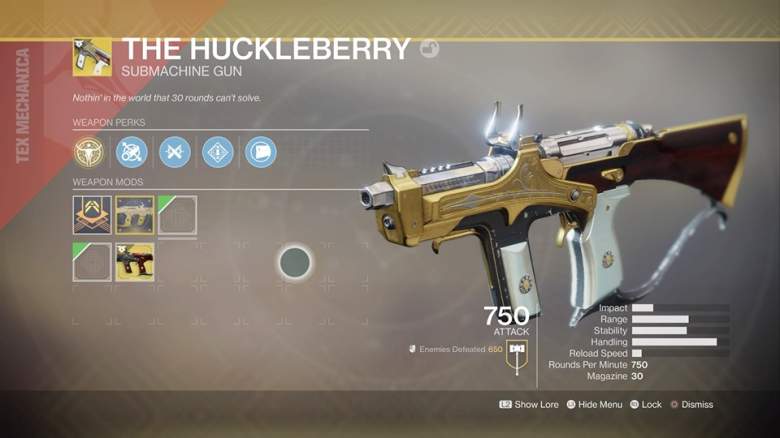 We know you love The Recluse. I love The Recluse. It’s easily the best Legendary weapon in the entirety of Destiny 2, but there is no way its Master of Arms perk isn’t getting nerfed. Because of that, Guardians should prepare by obtaining The Huckleberry and its catalyst. Easily one of the most underrated Exotics in the game, this weapon is essentially an alternate version of the Recluse.

While it may not have an instant damage boost upon killing a foe, it does come with Rampage and the ability to automatically refill the magazine when you kill something. This lets a smart player decimate hordes of angry aliens without a second thought. Sure, it’s not a perfect replacement for The Recluse, but The Huckleberry is easily the next best thing.

One Thousand Voices only issue is getting it, as the gun is randomly dropped at the end of the Last Wish raid. Even with its drop rate increased we’ve known people who ran the raid upwards of forty times and never got it while others obtained it on the first try. If you are going for this Exotic, understand that you may not obtain it before Shadowkeep.