It’s been 24 hours since players discovered the secret quest Bungie slipped into the weekly update and no one has figured out how to complete it. At the time of writing this, players are diligently working to crack the puzzle hidden within Destiny 2’s Corridors of Time on Mercury. Originally believed to just be a simple matter of following a sequence of symbols that appeared on the obelisks every hour, this quest has become so much more.

Upon completing all 19 Corridors of Time codes, streamers like Gladd, Datto, SayNoToRage, Sweatcicle, and others discovered there was a second part to this quest. Now players are trying to essentially fill in a massive puzzle using the symbols found on the floor at the end of each sequence. The results of figuring all this out are complete and utter madness that kept the community working throughout the night.

Just look at this screencap of a spreadsheet used to decipher this puzzle from Gladd’s stream.

The idea is that by connecting the various collection of symbols, a path will form that players can traverse. Since each of the 19 floors has a central symbol in their cluster, the running theory is these are what you’d follow once a sequence is established. Unfortunately, piecing together that order has been a monumental task. If everything goes according to plan, completing this puzzle will finally let us interact with the tomb in the Time Vault. 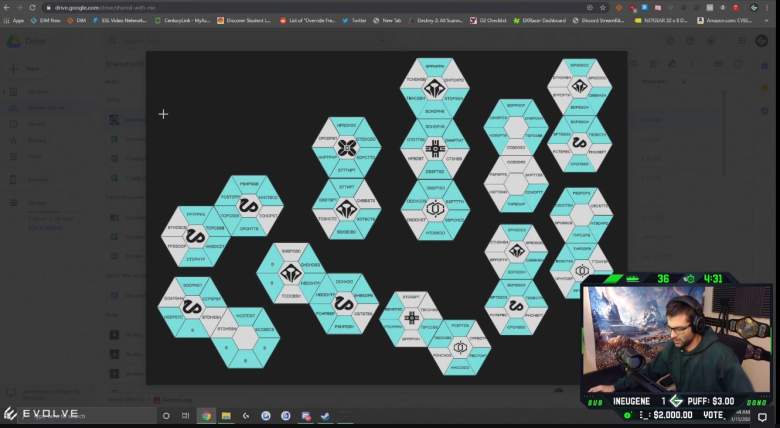 For many veteran players, this quest may feel reminiscent of the old Outbreak Prime mission back in the original Destiny. Similar to this mission, the Outbreak Prime quest tasked users with solving a complex math equation, along with deciphering binary in the middle of a raid. Similarly, Destiny 2 tasked users with solving Niobe Labs, a tricky puzzle encounter that mixed mechanics, combat, and riddles. In fact, Niobe Labs was so difficult Bungie eventually unlocked the content it was originally gatekeeping.

It’s unclear how long it will take to solve this puzzle, but many users are positively responding to the mission. In a season that has been heavily criticized for a lack of new and surprising content, having a secret quest appear was a welcomed surprise. Even though many players are not trying to solve this puzzle, many are heavily invested in the outcome. There are around 20 thousand people on Twitch watching Destiny 2, with the majority of streams revolving around the Corridors of Time puzzle.

This is the type of content that Destiny 2 has desperately needed since Shadowkeep’s release. With most of the activities known about in advance thanks to data miners and Bungie’s own roadmap, it’s great to see they can still captivate the community. As for what the reward could be, many are speculating it’s the Exotic swords from Destiny 1. This is due to the sword shape appearing on the tomb you discover at the end of each sequence.

These would be a nice throwback for players, since the Raze-Lighter, Dark Drinker, and Bolt Caster were heavily used by players. Each one possessed a unique perk, such as the Dark Drinker’s ability to perform a Legend of Zelda style spin attack that decimated groups of enemies. There’s also a chance that we obtain something we’ve never used before, but with this much hype, we can only hope the rewards are worth all the effort.

Unfortunately, the quest is unsolved, but the community is getting very close. I wouldn’t be surprised if this puzzle was cracked by the end of the day. If you want to catch up, make sure to read our guide on all 19 codes so you can get the new lore entries and emblem.

Part of me thinks this is just an elaborate response to everyone complaining about the simplicity of the Devil’s Run quest, but it’s clear this has been in development for some time. On the bright side, at least there’s no 20-minute timer.