Jam City’s newest mobile experience is all about hashing out your issues on the battlefield.

World War Doh is a real-time strategy game that puts you in the shoes of a hefty commander who has to deal with an equally chubby rival. Both sides go to war by placing their troops on the battlefield by using the sacred energy source known as Doh. Besides sending your troops into battle, you’ll need to defend your two most important buildings that bless you with HP and a power boost. Each skirmish you’ll hop into gets intense in just a few seconds, which means you’ll need to quickly adapt and utilize proper strategies at all times. Luckily, you came to the right place for those exact game-winning strategies.

Here are the top five tips, tricks, and cheats you need to know for World War Doh:

1. Head Into Battle With a Manegeable Doh Cost Deck Average

• Doh is the most important resource in World War Doh – it’s the one element that gives you the ability to put your troops onto the battlefield. In order to keep a healthy amount of troops on the battlefield and make sure you’re staying on the offensive, you’ll need a deck of cards that stick to a manageable Doh cost. During the early portions of your campaign, try and go for a deck or two that abides by an average Doh cost of 3.8. It doesn’t matter what cards you pick for those two early decks – be as varied with them as you’d like, but make sure they always hit that 3.8 average Doh cost rating.

• Once you acquire higher Doh activation cost cards, add just one of those lethal card types to each of your decks. Those high Doh coast cards can be relied upon to be the most powerful troop in your decks. Reaching higher leagues means unlocking stronger cards and assembling decks with higher average Doh costs. Just keep this in mind – you’re always better off using a deck equipped with the following during the beginning stages of your battle campaign (feel free to use our sample deck, by the way):

2. Put These Legit Battle Tactics to Good Use

• As soon as a battle kicks off, march your commander to the spot where the Doh barrel eventually spawns. While you’re waiting, place a few troops on the battlefield. If you have a deck that allows you to spawn powerful troops that need a few extra seconds to spring to life, place them next to your two main buildings. You’ll usually have to defend that powerful troop type alongside your other troops while it’s preparing to join the fight. Once you fully capture that barrel of Doh, you’ll have enough extra card activation points to go around for your troops.

• You’ll want to keep a close eye on the opposition and his troop tactics – if the other commander wants to shoot it out with you directly, use your power-up building to knock a few extra pegs off his health and do the same to his nearby troops. Do your best to place an equal amount of troops on both sides of the battlefield, too – for example, having two or three troops marching forward on both the left and right lanes should do you some good. Keep a Spell type card in each of your decks – these cards can bring you out of a bad situation and possibly get you a comeback win. Besides killing the other commander, you should always make it a priority of taking down both of his buildings so you can earn some extra league points by the end of the battle.

3. Link Up With a Club in Order to Grab More Cards 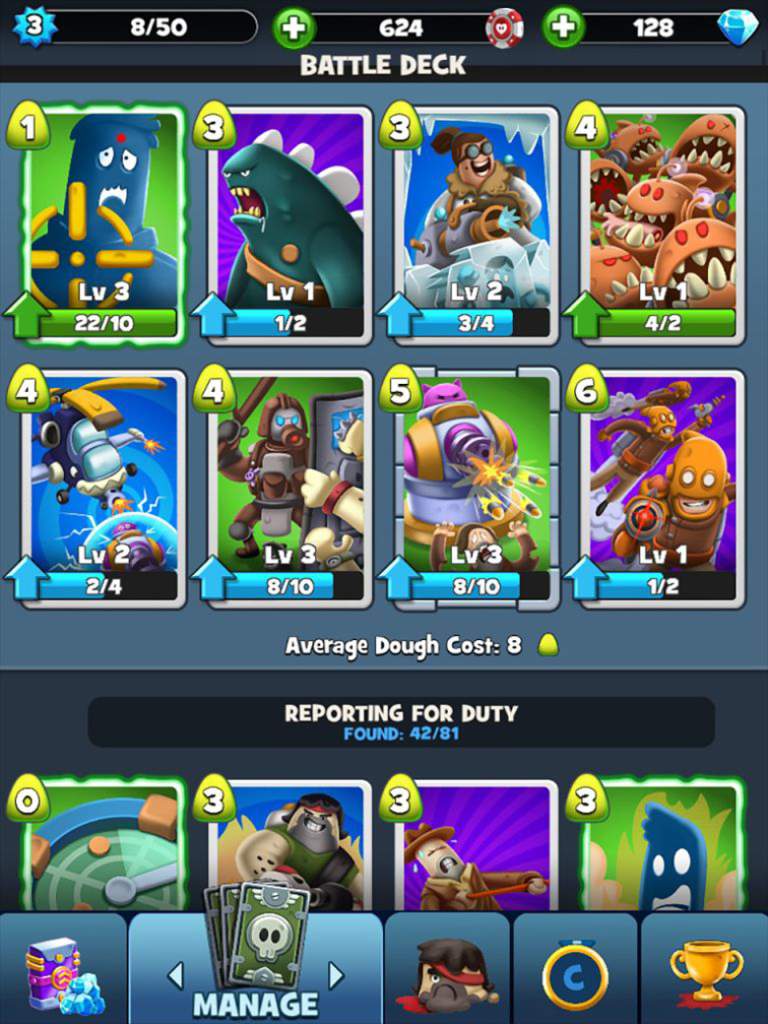 • Aligning yourself with an active club is essential in World War Doh. Besides the big community chest you’ll get on a regular basis, you’ll get the chance to earn multiples of the cards you already own. This helps you level up those cards and make them even more viable during higher league skirmishes. Before you log off, head into the club tab to request the card copy of your choice. It’s always best if you ask for card multiples for cards that are on the lower level spectrum. Be sure to return the favor so your fellow club members have no issue sending extra card copies your way. This activity goes a long way towards strengthening your weaker cards over time.

4. Replace Regular Air Chests Slots with Better Ones and Nab Those Tributes When You Get the Chance

• If you collect a chest during a battle, you’ll get to place it in one of four slots on the main menu once the battle is over (win or lose). While you’ll more than likely come across a whole lot of basic Air Chests, from time to time you’ll pick up something even better.

• When that happens and all four of your chest unlock slots are full, spend those gems in order to immediately open a basic Air Chest to make room for the rarer chest type you just collected. Let the long timer run down for higher rarity chest types such as that one. When you have a case where you’re ready to log off for the day and have all four chest slots full, go ahead and set one to unlock while you’re away. Repeat that process over the course of a day by logging in once a chest is ready to open, then set up another one to unlock and so on.

5. Take Advantage of Those Video Advertisements, Gems and Apples

• Getting extra coins and supersizing your prize pig can be done for free if you’re willing to do a few extra tasks. In the first case, be ready to watch a video advertisement to make that happen. The same activity applies to earning an extra card request from your club members and a free reward chest from the shop. Speaking of the shop, don’t forget to request your tribute rewards. As for your prize-filled piggie, you can also watch video ads and spend gems in order to fill them up with even more awesome rewards.

• It’s worth putting your gems towards fattening up your piggie – once you crack that piggie open, you’ll earn even more gems and quickly replace the gems you just used. And if you happen to be in possession of an apple, feed it to your piggie in order to collect even better items. Always keep this in mind – gems are essential and should only be used to supersize your reward piggies and instantly open basic air chests when it comes time to immediately replace it with a chest of a higher rarity.