Earth’s defenders against incoming alien threats are the always reliable Men in Black.

If you’ve read the comics, seen the movies, and watched the cartoon, then you know exactly who that secret organization is. Men in Black: Galaxy Defenders is a brand new mobile first-person shooter that places you behind the high-tech weaponry your chosen agent equips for some extraterrestrial blasting. You’ll unlock recognizable agents for play, take down mobes of alien goons, compete in the arena, take down other agents during PvP skirmishes and save the world all the while. We’re experienced agents who’ve done a whole lot of good work out in the field, so take our advice and you’ll do just as good within this Men in Black experience.

Here are the top five tips, tricks, and cheats you need to know for Men in Black: Galaxy Defenders:

1. Focus on Pulling Off Headshots and Completing Missions in Order to Maximize Your Credits Gain

• Each zone within this mobile FPS is home to high-threat level aliens. Once you select one to take down, you’ll need to play through a series of stages in order to confront them during a final encounter between your chosen agents and the extraterrestrial big bad. Campaign stages are where you’ll really need to take advantage of your scanner and slow mo abilities (your supercharge ability is best saved for arena battles).

• For all the leadup missions and the eventual boss encounter, try to land as many headshots against your foes as possible. And make sure to fulfill the side missions each stage asks you to complete, such as completing a stage under a certain time limit and firing three shots or less. That way, you can claim a bunch more credits once a stage is complete. You’ll also earn some extra credits just by killing multiple enemies with just one carefully placed shot. Getting a perfect three-star rating on a stage is always a must. Keep all of these things in mind during each campaign stage playthrough so you can earn plenty more credits, clan points, and crystals for your efforts. Always keep this in mind – completing stage missions earns you stars, which goes toward earning awesome rewards for the current region you’re in.

2. Spend Some Time in the Arena to Nab a Hefty Amount of Extra Credits

• You’ll notice that every time you move up to the next stage for a certain boss, you’ll be asked to upgrade a certain part of your primary weapon before you can proceed. Eventually, you’ll reach a point where you won’t have enough credits on hand to make that weapon upgrade and move onto the next stage.

• Whenever you run into this annoying roadblock, head straight for the arena. Play it as many times as you can and win so you can collect a huge amount of extra credits. Maximizing your kill count in the arena can be done by relying on your Supercharge ability and making sure you shoot down those explosive obstacles when the time is right. Spend a good amount of time taking the top spot during several arena battles and you’ll earn more than enough credits for your future weapon upgrading progress.

3. Win a Few PvP Battles in Order to Earn Even More Supply Crates Full of Rewards

• Earning Supply Crates is essential since opening them gives you access to new weapons, agents, perks and extra currency. When you’re looking to get your hands on them in quick succession, try your hand at the PvP mode. It’s best if you spend an entire game session just winning as many PvP battles as you can so you can collect several supply crates for the day. The goodies you earn from a day’s worth of opened supply crates go a long way towards making your future campaign progress much easier to handle – all those new weapons, agents and perks you’ll unlock will make you even more formidable during your next play session.

4. Select a Different Player Agent Depending on Which Mode or Mission You’re Participating in 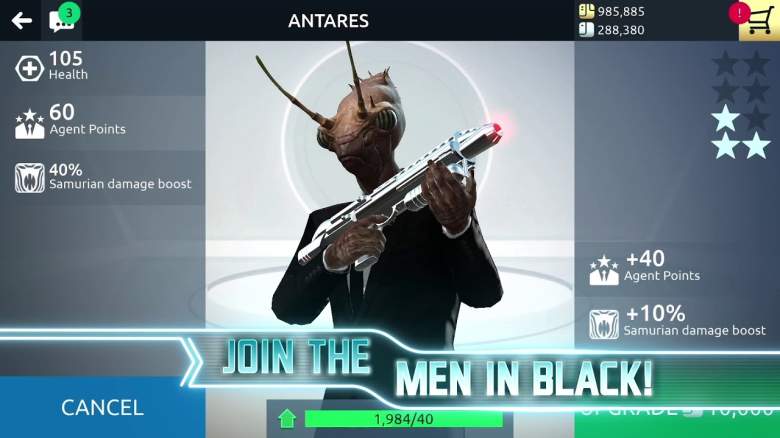 • As you unlock new agents, pay attention to the extra perk they come with. Some agents are gifted with perks that make them the perfect candidate for certain play modes. Agent M’s perk, which gives her a 15-percent arena multi-blast point bonus, makes her one of the best agents to choose when you enter the arena. This same strategy applies to main campaign missions when it comes time to choose a partner to accompany you in battle.

5. Be Prepared to Sit Through a Whole Lot of Video Ads in Order to Earn Even More Rewards

• If you’re planning on playing Men in Black: Galaxy Defenders for free the whole way through, prepare to watch a ton of video advertisements if you want to earn the maximum offering of rewards. This means you’ll always need to sit through a video ad when you’re given the option to do so in order to double your rewards after a stage has been completed. This video watching activity also applies to earning free energy for each game type and collecting more items during your daily login. And finally, be sure to watch a video ad every time so you can triple the goodies you can earn from a newly earned supply crate.