A Gears Tactics review code was provided by the publisher.

While the Gears of War franchise has always been a shooter, the vast world and lore behind it means it could easily enter other genres, and that’s exactly what has played out here.

Like Halo before it, Gears has entered the strategy genre, but unlike Halo Wars, Gears Tactics is a tactical game in the same vein as XCOM.

I must admit, it plays a lot better than I initially expected. In fact, I believe it would be highly appealing to fans of the genre, even if they aren’t necessarily a fan of Gears in general.

A little bit of background for me ⁠– I haven’t touched a Gears of War campaign since Gears 2, so I don’t really know a whole lot about the series at all. With that said, I was able to jump straight into Tactics and not feel too lost.

There will definitely be some tidbits learned throughout the story, that I won’t spoil here, that will greatly change the course of the Gears storyline.

Obviously, I didn’t know who many of the characters were, with the exception of the Cole Train, but that’s not exactly important in a game like this. The main draw of Gears Tactics will no doubt be the gameplay, and that’s precisely where it shines.

If you were worried about the series losing too much of its identity, you can put those concerns to rest. Thanks to this being an XCOM-like game, cover plays a big role, and that’s right on-brand for the Gears series.

Another staple that makes the seamless switch is the execution system. Some enemies will be downed when you defeat them, so you’ll either have to wait for them to bleed out, or you’ll be able to run up to them and chainsaw them.

It’s a nice touch and it certainly goes a long way to making this feel like a true part of the Gears of War franchise. There are fewer things more satisfying in a video game than driving the bayonet of a Retro Lancer through your enemy from behind, saving the life of a fellow soldier.

An interesting deviation from the franchise is how upgrading weapons work. After a mission, players can open up a supply case, which isn’t purchased with real money, which will reward them with new gear to equip. These cases will also be found scattered across the map as optional pickups.

In the Barracks screen between missions, you’ll be able to swap out skills and gears, while also checking a certain character’s stats. Characters have a pretty robust skill tree that allows them to built whatever way you deem fit. 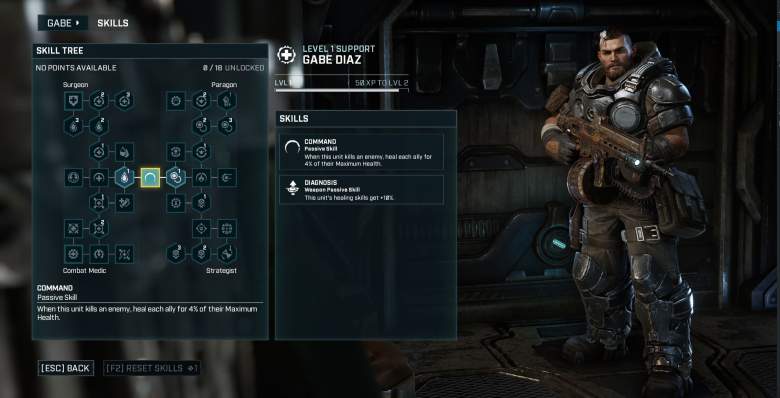 Build how you want.

While going through the story, you’ll begin to pick up on things that you might not have really wondered about a whole lot with previous games, such as where Brumaks or Corpsers come from, but you’ll receive those answers. The Gears franchise has large amounts of lore to dig into and Tactics will only add that list.

The missions aren’t all about just killing enemies either. Gears Tactics will throw players some bones and mix things up whether it’s consistently moving forward and avoiding carpet bombs or being given the objective to rescue capture Gears and rallying them to your cause. These parts of the game are welcome additions and really help the game keep on feeling fresh.

Some of the missions, such as the ones where you have to hold down supply points, can get difficult in a hurry and require you to change up the way you play the game. These supply points can quickly become overrun with enemies and cause you to ramp up your game as you struggle to stay alive.

Throughout that journey, I did run into a few annoying bugs, such as the inability to move my units to an evac point, which led me to load a recent checkpoint twice in the same mission. It only cost me a few minutes of time, but it was frustrating and happened more than once.

At its core, Gears Tactics is a joyous romp through an XCOM-type game with a Gears of War paint job. The devs don’t seem to stray too far from that, but that’s absolutely fine as the game does a good job of translating to that format.

The story does just enough to add to the franchise, but it likely won’t leave you thinking about it for days after the fact. The gameplay is the true meat of the game and it delivers in a big way.

If you were ever wondering what a Boomshot, Corpse Bow or Gnasher feel like in a strategy game, this is absolutely a game for you.

While the story hovers around 20 hours, there is plenty to do after it’s wrapped up, whether it’s going back to complete the other optional objectives, leveling your characters up, or even playing through the game again on a higher difficulty.

Aside from some minor bugs, a lack of interest in the story, and some annoying enemies (looking at you Ticker), Gears Tactics is a very solid title and is worth a try for fans of the genre.