A few months back, we learned that the devs behind Street Fighter V were in the process of adding five more characters and three more stages to the game.

During today’s (August 5) Summer Update live stream event, everyone that tuned in got their first look at who those brand new roster additions are. The first character to be revealed was Dan Hibiki, the returning master of Saikyo Style martial arts. Some in-development footage of the returning Shoto was shown off, which previewed his upgraded moveset (which included a tease of how his infamous taunt function may act as a V-Skill or V-Trigger of some kind). Dan’s sloppy combat stylings and goofy approach to traditional Shoto maneuvers look to be especially cool now that they’re making the transition to SFV.

The next character reveal was given out by AEW star Kenny Omega and it was none other than Rose. Menat’s master and powerful “Soul Power” wielder is finally back in the fight. The third character who’s making their return to the Street Fighter franchise is the one-armed hermit known as Oro from Street Fighter III. The final character that was unveiled today was a guest character from Capcom’s very own Rival Schools, Akira Kazama! As for who the fifth character is, that’s (unfortunately) still a mystery. 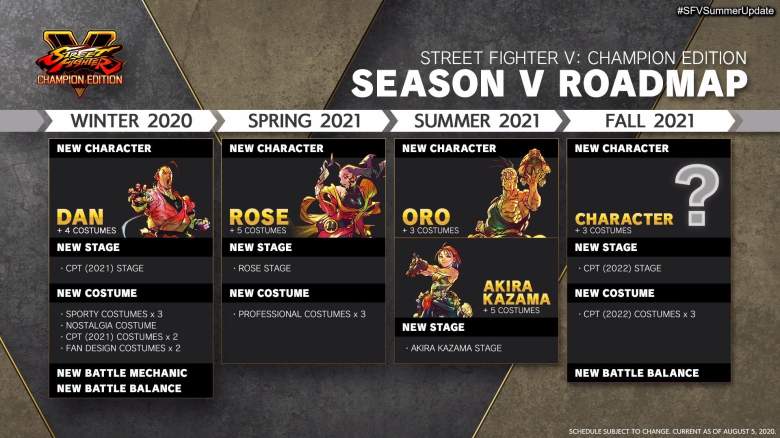 The most interesting part of the SFV Summer Update live stream was how it gave fans a roadmap for Season 5. Besides the usual array of new costumes and incoming stages, it was revealed that SFV will be receiving an all-new battle mechanic and two major balance adjustments over time. Here’s hoping that Akira’s signature stage includes a few familiar faces from Rival Schools going crazy in the background. The wait may be long for these upcoming SFV characters, but we’re just happy to see that they’re eventually coming our way.