On April 20, Batman will be making his second in appearance in Fortnite, but this time he’ll be doing it in a comic book.

This will be the first part of a 6-issue miniseries that’ll see the Caped Crusader discovering all sorts of secrets about the Fortnite island. This will give us a deep dive into the inner-workings of the islands and hopefully answer many of the burning questions that we have.

As an incentive for people who pick up the comics, each issue will come with a download code that’ll unlock a cosmetic.

Not everything has been announced yet, but we know the Armored Batman and Rebirth Harley Quinn outfits will be available as well as Catwoman’s grappling hook.

Initially, it was expected that these cosmetics would be tied exclusively to the comics, but that isn’t the case.

Here’s how you’ll be able to snag these cosmetics without the need of picking up a comic book at all.

According to Epic Games’ blog post about the comic, all of the cosmetics that are tied to the comics will also be coming to the Item Shop on the same day.

The exception to this rule is Issue 1’s Rebirth Harley Quinn outfit. However, she will eventually be in the Item Shop, but instead of April 20, she’ll show up in June.

Armored Batman sounds like it’ll remain exclusive as well because that will be unlocked by players who pick up the codes from all six of the issues.

When Do They Release? 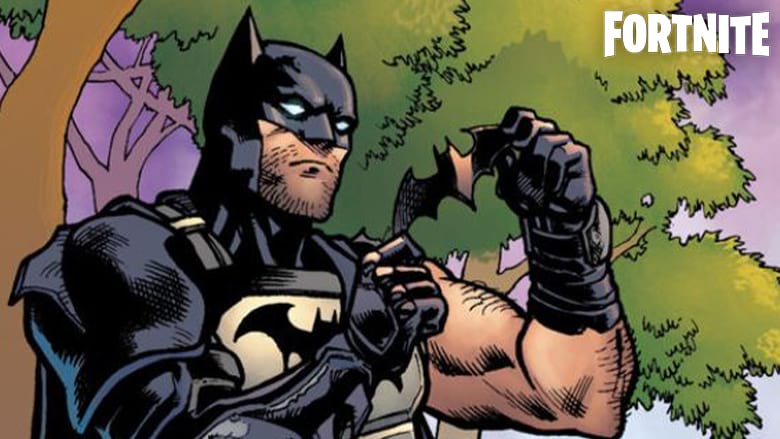 The question you might have now is when do these issues come out? Even though you won’t need to pick them up physically anymore, they will still indicate the release date for the cosmetics in the Item Shop.

The first issue releases on April 20, but the Harley Quinn outfit won’t be in the shop that day according to Epic’s post.

However, the rest of the cosmetics will follow the release schedule of the comics. Here’s a look at that:

This indicates we should be getting a steady dose of Batman-related cosmetics for a few months.

Things might be getting expensive for people who want to pick everything up, but buying all of the comics will put you at around $30 anyways.

The only thing we can do now is wait for the issues to come out. If you’re not at all interested in the new lore that the comic will be unveiling, waiting around for the cosmetics to hit the Item Shop will be your best bet.

We still don’t know everything that’s being released, but we’re sure that’ll all be revealed in due time.

It’s still unclear if this comic book will coincide with Fortnite updates in any way either. The new comics do release on Tuesdays, which is typically the same day as an update.

We do know that Batman builds a Bat Cave in the comic, so maybe we’ll be seeing that show up in Fortnite as well.

READ NEXT: How to Unlock Ice Hunter Aloy Style in Fortnite

Loading more stories
wpDiscuz
0
0
Would love your thoughts, please comment.x
()
x
| Reply
You don't have to buy a single comic to get the new Batman Fortnite cosmetics.