On December 4, Fortnite Chapter 2 ended with a bang as The Foundation was revealed to be none other than Dwayne “The Rock” Johnson himself and he helped the loopers escape the destruction of the old island.

The end of the event left our characters floating out in the middle of the ocean, but it gave everyone a good view of the old map completely flipping over and revealing a new one. We won’t be able to visit it until Chapter 3 launches, but that doesn’t mean we can’t look at the changes so far.

After the event finished, players were able to “reveal” the map themselves by using the #FortniteFlipped hashtag on social media. If enough players jumped in on the fun, it would be fully shown, and that’s what happened. 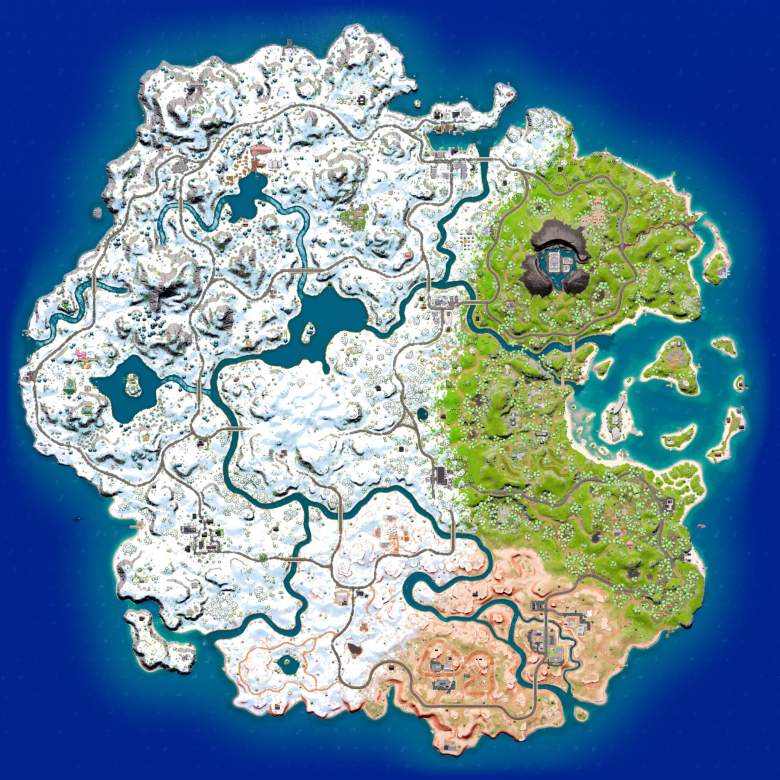 Coral Castle haters rejoice because that location is nowhere to be found here! Instead, we have a return of many different biomes as we have desert, grassy and snowy areas all on the same map.

Many fans remember the end of Chapter 1 and how the map looked a bit similar to this, so it’s nice to see a return to Fortnite’s roots of sorts.

Something this map doesn’t show us at the moment are the named POIs, but FireMonkey has us covered there.

Thanks to some leaks, we know Tilted Towers will be back at some point during the season because of a challenge that takes place there.

This is because one Week 8 Challenge is "Eliminate an opponent in Tilted Towers" !!!

(Thanks to @MidaRado for making me aware of this!) pic.twitter.com/gEZP0gdx4J

Outside of that, it’s tough to tell what the plans are for Epic. Chapter 2 didn’t really give a ton of map changes later on, but early on when we had the yacht, Grotto, Agency, etc., it was really fun to play on.

Hopefully things don’t become stale later on in this chapter like they did before.

A new Island is here and with it, a new set of faces have arrived.

See who you'll be fighting alongside on the Island. pic.twitter.com/uoYPsUg9J4

In the new trailer released by Epic, we can see Spider-Man has officially been confirmed and he’ll be part of the Battle Pass. This shouldn’t be that much of a surprise considering we’ve have superheroes invade the Battle Pass a lot recently.

We do also know there will be a Daily Bugle building on the map, but we just don’t know exactly where it’ll be because of all the new locations.

With web-slinging being a new option, as seen in a leaked trailer, it’ll be interesting to see how these new traversal features help players get around the map. This Chapter will likely be giving us the new sliding mechanic that leaked a while back as well.

All in all, it should be a very exciting chapter for Fortnite players, but the biggest thing is obviously the map change. It’s always fun to explore the new locations and find out new drop spots.

The cool thing here is every spot will be worth checking out, so make sure you give everything a look and explore!

READ NEXT: Fortnite Chapter 3 Wishlist: 7 Things We Want to See