With this being 2021, collaborations are nothing new in Fortnite, but it looks like one of wildest ones yet could be coming when Chapter 3 arrives later next week.

A popular fan theory has been that Dwayne “The Rock” Johnson is playing the mysterious character The Foundation, but there’s never been anything to confirm that as of yet.

The last time we saw The Foundation he was washing up in Gotham City as part of the recent Fortnite and Batman crossover. The main part of the issue was to show how The Batman Who Laughs ended up on the island, but The Foundation played a role in it as well.

Well, The Rock has decided once again to hype up his possible role as The Foundation, but this one seems a bit more on the nose than before. After this latest video, it’s hard to imagine him not playing this character.

Late night grind, POWERED BY @zoaenergy💥⚡️
ZOA delivers healthy energy when you get to that ZERO POINT so you’re always taking the HIGHER GROUND.
Because drinking ZOA, will always give you the strongest FOUNDATION in the UNIVERSE!
Sip your ZO, now LFG!!!! #ifyouknowyouknow 🦾 pic.twitter.com/admN7U9QKt

At first glance, The Rock’s minute long video might seem like a simple advertisement for his ZOA energy drink, but if you read into it, you’ll see all the hints.

For starters, he uses phrases like “Zero Point,” “Higher Ground,” and “Foundation” all in the caption. Of course, since fans think he’s playing The Foundation, that phrasing seems a bit telling.

If that wasn’t enough evidence already, just watching the video seems to confirm things. At the 23 second mark, you can see Rock reaching into his fridge to grab a can of ZOA, and if you look closely enough you can see The Foundation’s helmet just sitting in there. 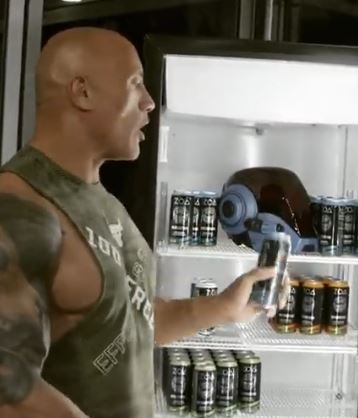 If you keep on going, the 44 second mark might give you a glimpse at a new gun coming in Chapter 3, but that one might be a bit more of a stretch. Then again, if he has the helmet already, who knows what else Epic sent him.

Now, the only question that remains is why is he the voice of this character? The Rock being the voice of something is cool, but there must be some sort of reason they picked him. We know he likes video games, he did present the original Xbox 20 years ago, but him crossing over with Fortnite would be massive.

At the very least, he can add some extra publicity to the game, but it’s not like Epic really needs it considering how many crossovers have happened in the past.

Whether you embraced the Invasion, opposed it, or just wanted to keep fishing.

The fate of the Island is at stake.

The Chapter 2 finale is December 4 at 4 p.m. ET. Unlike some of the recent events, this will be a one-time-only thing, so you’ll need to make sure you’re there to see the festivities or you’ll have to catch a rerun on YouTube or something.

It’s expected that there will be another Black Hole scenario similar to the one that follow Chapter 1, so the game will be offline for a few days for Epic to prep for the new chapter. Once that happens, we’ll likely have a new map, new guns, new skins and perhaps a better look at who The Foundation really is.

READ NEXT: How to Complete Fortnite x Jumpman Trickshot Challenges

Loading more stories
wpDiscuz
0
0
Would love your thoughts, please comment.x
()
x
| Reply
The Rock appears to be teasing us about Fortnite yet again.