It might be pretty easy to guess where people are being eliminated the most in Fortnite Season 5, but it’s still nice to know where you can land without having the constant fear of being sent back to the lobby.

We’ve previously gone over the fact that Salty Towers is by far the most dangerous area in the game and practically no place there is safe, but what about the rest of the map?

While Salty Towers might be the marquee hot drop, there are still several other POIs to visit and explore, and some of them can end up being pretty dangerous. What it boils down to is people want to get good gear, and the only place to do that with consistency is landing at big POIs.

As a result, we’ll be seeing a lot of players landing in the same spots and getting into early fights. Here’s how this plays out over the rest of the map. 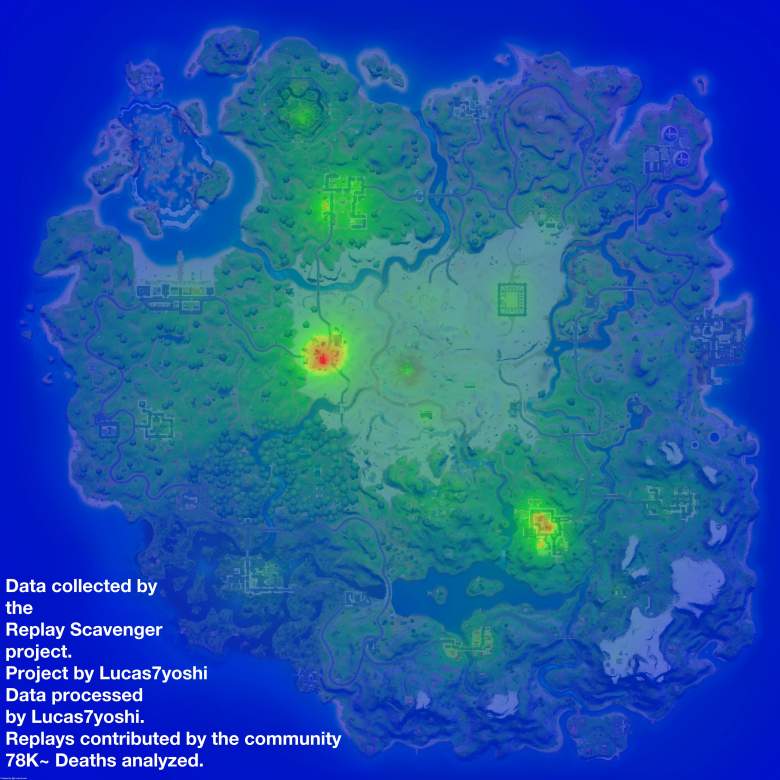 Prominent Fortnite leaker Lucas7yoshi underwent a project that consisted of him analyzing around 78,000 replays and finding out where the majority of players ultimately ended up being eliminated.

In his discovery, he unsurprisingly found out that Salty Towers was far and away the most dangerous POI, but there are some other places to look out for.

Lazy Lake is strangely the second most deadly POI, something that might surprise a lot of players.

Another spot to keep an eye on is Stealthy Stronghold, a place that appears to be becoming a bit more deadly. This more than likely coincides with the appearance of Predator as this is now a spot you can get a Mythic weapon.

What Does Any of This Mean?

Some first of its kind data.

Death heatmaps on 20 points of interest

At the end of the day, this bit of information doesn’t really mean a whole lot. Your drop spot likely won’t be changed after seeing this, but it’s still cool to see where people land.

It goes to show places like Retail Row and Slurpy Swamp, fine drop spots on their own, seem to be avoiding early fights, so you might be able to get decent loot consistently if you land there.

The choice is yours!

READ NEXT: How to Get “The Punt!” Spray For Free in Fortnite

Loading more stories
wpDiscuz
0
0
Would love your thoughts, please comment.x
()
x
| Reply
Here's where people are being eliminated the most in Fortnite.