Following the release of Predator, we know the next character coming to Fortnite through a Zero Point portal will be a female.

Now, there has been a lot of chatter in the community saying it’s Lara Croft from the Tomb Raider franchise, something that even Square Enix seemed to tease.

However, the release of the v15.21 update has now caused us to shift gears into thinking instead of Tomb Raider, it’ll instead be Sarah Connor from the Terminator franchise, and it also looks like she’ll be bringing a friend.

This isn’t without evidence to back it up either, so it’s beginning to look like this is a real possibility. Let’s take a look at what we know so far.

Sarah Connor & T-800 from Terminator appear to have been leaked early via the Playstation Store.

Well, the most obvious way to know it’ll be Sarah Connor is the fact it showed up a bit early on the PlayStation Store.

In the image posted by FireMonkey, we can see that not only will she be making the leap, but we’ll also be getting a T-800 Terminator too.

Before this even leaked, we knew that this was a strong possibility as the portal featured a scene from Terminator 2.

first picture from Terminator 2
second picture is for the portal

the doors are similar to eachother !! pic.twitter.com/YPjRVDAwI0

Now, the only question that remains is how we’re going to get our hands on this. It’ll likely arrive in the Item Shop, but we might have a long wait.

When is Terminator Coming with Sarah Connor?

A machine that will never stop.

Sarah Connor and the T-800 are the newest Hunters to arrive on the Island. Grab them in the Shop now! pic.twitter.com/2kURFpuHIc

Update: They are out now.

The big tell that we might be waiting a while for these skins is the fact that their designs didn’t leak with the recent update.

Typically, we would know if new skins were added into the game because they’d first show up in the files. Then again, the two skins look done and ready to roll, so they could be out extremely soon, perhaps even tonight. 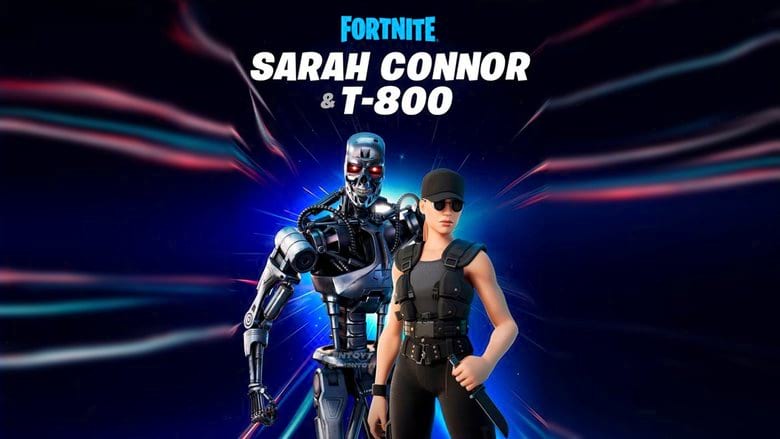 There’s nothing that would be stopping Epic from dropping these skins without an update, but we usually know about this stuff ahead of time. With it already being advertised, it does seem like the skins are nearly ready for release, so we might be way off base here.

Whatever the case may be, we’re definitely excited to get our hands on these two skins and these are two very iconic characters that’ll be getting a chance to make their Fortnite debuts.