One of the coolest additions to Fortnite Season 5 is the introduction of the new Exotic weapons that can be obtained by spending your precious Gold Bars.

You can get these Exotics by visiting the various NPCs that are scattered across the map, and there are a lot of them, so if you’re looking for a particular weapon, then you’ll need to know who sells it.

In the case of “The Dub” shotgun, you’ll need to find the Dummy skin NPC, and there are two different spawns for him. All you’ll have to do is figure out where he is, have your Gold Bars, and then you’ll just purchase it from him.

Where to Find The Dub 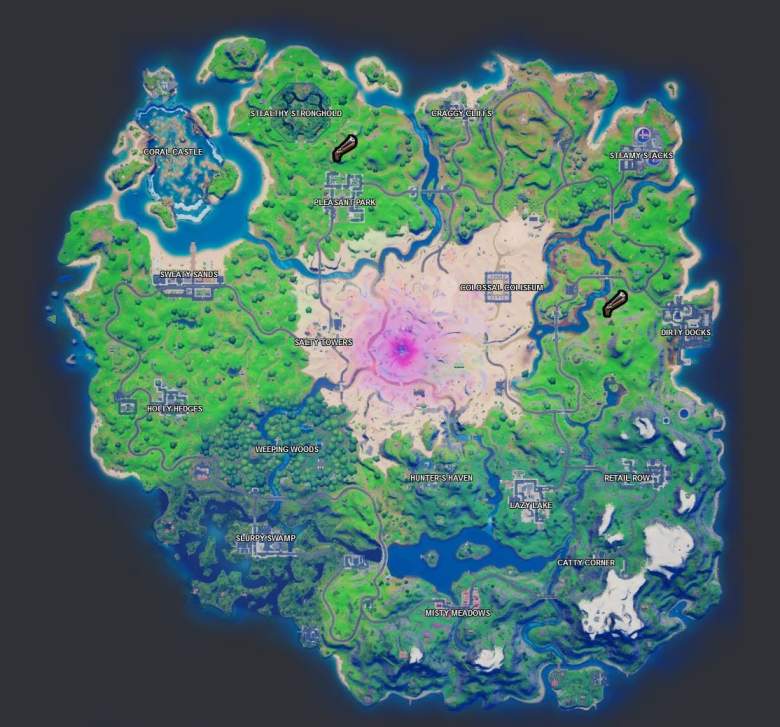 As you can see from the map by the folks at Fortnite.gg, The Dub can be gotten from two locations depending on where Dummy spawns.

The first spot is directly north of Pleasant Park while the second is nestled between Colossal Coliseum and Dirty Docks.

You’ll need to make sure you have a bunch of bars to spend as these Exotics do cost upwards of 1,000 Gold. The Dub is an interesting weapon as it’ll let you do something that hasn’t been around since the very early days of Fortnite.

Double Pump is Back

Back when Fortnite was still in its infancy, one of the most popular strategies in the game was to carry two or even three Pump Shotguns and immediately switching to another after firing one.

With no delay between shots, and this gun just dishing out massive amounts of damage, there was really no reason to not use this strategy.

Eventually, Epic made it so there was a delay for shooting when switching shotguns, something that has remained today, until The Dub rolled around that is.

Players have discovered that shooting this gun and then switch immediately to another shotgun will have no delay, so you can take advantage of that. Of course, Pumps aren’t in the game anymore, so it’s not as powerful as it once was, but this can still be a powerful combo if you find yourself with The Dub.

Read More
Fortnite, Gaming News
Here's how to get your hands on "The Dub" Exotic shotgun in Fortnite.