One of the surprises of Fortnite Season 5 was The Mandalorian being the first skin unlocked in the Battle Pass.

Another surprise is that he actually features a set of upgradable armor that will allow you to standout from other players using the skin, at least until they also get the upgrades.

You’ll have to complete a series of quests in order to unlock these enhancements, but they usually aren’t very hard to do.

For one of the quests, you’ll have to track down an NPC by the name of Ruckus and eliminate him. He’s actually a difficult foe, and it becomes even harder if you don’t even know where to look for him.

Here’s where to find Ruckus. 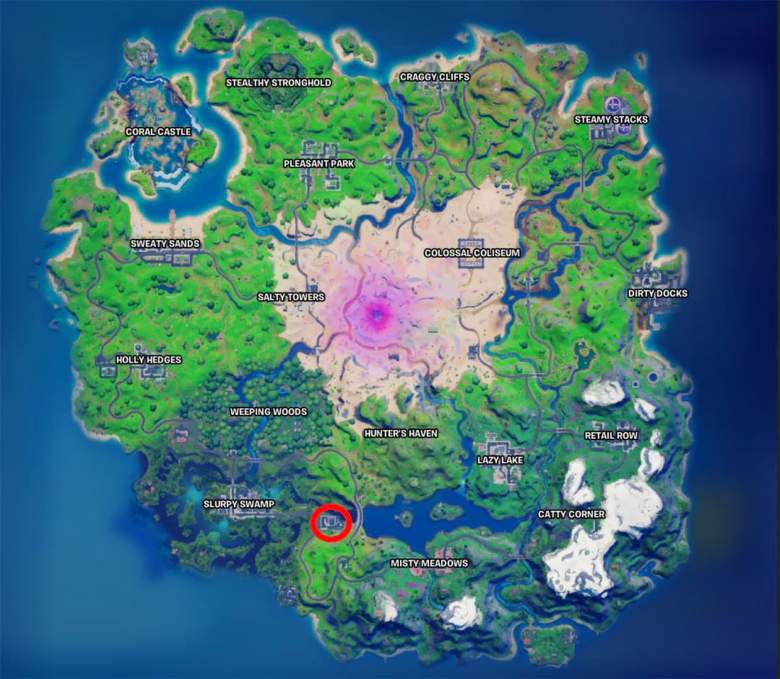 This NPC is actually sitting at an unmarked POI to the east of Slurpy Swamp and west of Misty Meadow.

The area itself is actually a decent landing spot as it’s a giant building with a lot of loot, but it also has Ruckus. This isn’t your typical NPC as this one will attack you on sight instead of giving you quests or weapons.

When you defeat him, you’ll get a Gold Assault Rifle and an RPG, so it’s not like you’re eliminating him nothing. Even once you finish the Mandalorian quest, this might become part of your rotation.

Tips For Defeating Him

As is the case for beating any NPC, you’ll want to make sure you have cover because either they will beam you or they’ll miss everything, it just seems like there is no in between.

Another tip would be to have a decent loadout before you fight him, and also make sure you have shield. He can knock your health down in a hurry if you’re not careful, so you want to make sure your name doesn’t show up in a kill feed after being taken out by an NPC.

For maximum safety, you can just shoot him from afar if he walks outside, so keep an eye out for that option as well.

READ NEXT: Where to Bury Gnomes in Pleasant Park or Retail Row in Fortnite