It looks like the next big mystery regarding the upcoming Fortnite crossover has been solved and it’s from one of the biggest gaming franchises of all time.

That’s right, Street Fighter is sending over two characters of their own to Fortnite, arguably putting this on par with both Master Chief and Kratos.

Even if you’re not a fan of fighting games, you’ve no doubt heard of Street Fighter and having a crossover with a juggernaut like that is no small feat.

The portal that reveals this so we’re very close to getting our hands on this crossover for ourselves.

We don’t yet know who the characters will be, but we can certainly make some educated guesses.

For those who don't know, this means the Skirmish portal is Street Fighter x Fortnite pic.twitter.com/0ToNjIBmbB

The image shown in the portal is a picture of an old Street Fighter stage according to Fortnite leaker FireMonkey.

This can essentially put all of the rumors that this would be a crossover with WandaVision to rest because of the fact that this is the Skirmish portal.

What that means is this is the crossover that’ll feature both a male and female skin, so that can effectively rule out WandaVision.

Something we don’t know is who exactly the characters coming over will be. For the male skin, it’s expected that it’ll either be Ken or Ryu since those are two of the most prominent characters in the game.

For the female skin, it could potentially be Chun-Li since she’s extremely popular as well. There are many different options to pick from, but if Epic wants to get some of the most recognizable characters into the game, this is the route they’ll likely go.

It was pretty much a shoe-in for these to be the characters, but now we have official confirmation.

Epic also released the reality log to listen to, giving us official confirmation about the crossover.

The skins will be hitting the Item Shop on February 20 at 7 p.m. ET, which is when the shop updates.

And Then There Was Two 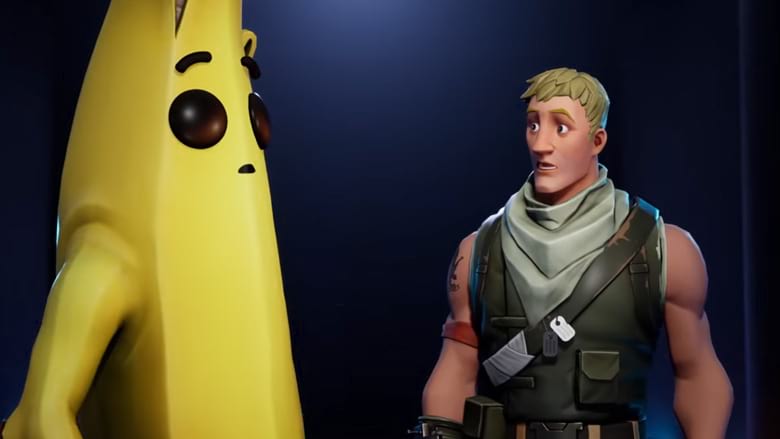 Once these characters come out of the portal and enter Fortnite, we’ll be down to just two more known crossover. We don’t yet know what that will be and it’s highly likely that players will start speculating immediately.

Of the three remaining teasers, this one will likely end up crossing off “hand wraps.”

With Ant Farm and Space Bananas left, it’s really anyone’s guess as to where we could be headed to next.

Ant Man is likely a common guess for Ant Farm, but why wouldn’t Epic have done that last season when we had an entire location for this character?

As for Space Bananas, that one has us stumped as nothing really comes to mind except for an astronaut Peely, but there’s no way that’s going to be the skin.

It’s clear that Epic is ready and willing to make a deal with pretty much any franchise under the sun, and they’ll even dig deep into franchises you haven’t heard much about for a while, Tron for example, so we’ll have to put our trust in them.

After these crossovers are finished, we’ll likely be finding out just why the characters are all coming over.

It’s shaping up to be an exciting end to the season, so just sit back and get prepared for what Epic has in store.

READ NEXT: Fortnite Leak Has Players Thinking Thanos is Returning