Throughout your adventure in Assassin’s Creed Valhalla, you’ll come to a point where you’re transported to Asgard and you’ll meet several familiar names including Thor, Loki and Heimdall.

However, there’s a good chance you’ll end up here very under leveled and realize that you won’t be able to do much progression here.

Strangely, it’s not entirely clear on how you’ll back out of this area after drinking the potion, which might lead many players to thinking you’ll have to reload a save to get out. This is a decent option, but there’s actually a much easier way to do this, so don’t panic.

How to Return to England 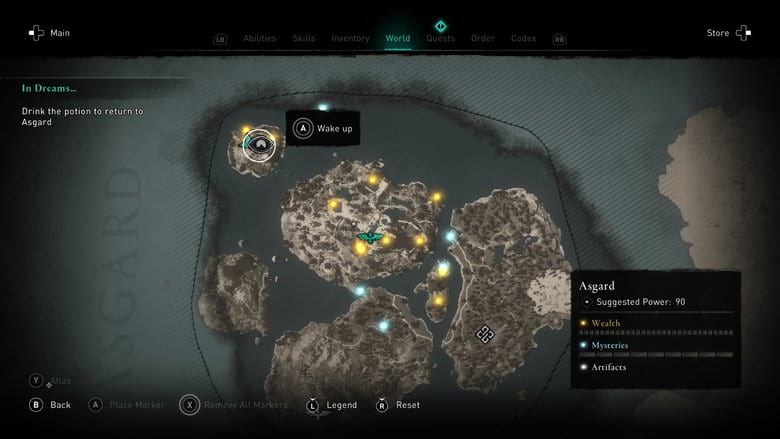 In order to unlock the ability to return back to the mainland of England, you’ll have to finish the opening quest in Asgard. Even if you’re underleveled, you should be able to get this done because I had no problem with it, despite being at least 20 levels too low.

Once you finish off this relatively short quest, you’ll unlock the ability to go back to the mainland. To do this, open up your map screen and scroll over to the top left area. There, you’ll see a button prompt that’ll allow you to return to England, which you’ll likely want to do ASAP if you’re not strong enough.

It’s a simple process, but I do have to admit that I was a little panicked until I decided to just do the mission underleveled.

How to Go Back to Asgard

When you do get leveled enough, you’ll eventually want to head back to this area, which you can do by drinking the potion at your settlement.

It’ll be marked on your map with a quest, so whenever you’re ready, make the leap and dive back into the world of Asgard. If you keep on the main quest path, it shouldn’t take all that long to gain enough strength to tackle this area.

READ NEXT: Who is The Traitor in The Stench of Treachery in Assassin’s Creed Valhalla