The latest Ebola virus outbreak is causing alarm to world health organizations. Officials believe the virus has picked up the pace from the initial occurrence in April of this year, and has hit Guinea, Sierra Leone, and Liberia.

This outbreak has become the largest on record with the most deaths. Almost 600 people have been infected and 340 have already died. It is not contained, and is spreading in West Africa. This is the first time that the Ebola virus has been detected in that region.

Doctors Without Borders, the French-founded humanitarian NGO, spoke to the BBC about the outbreak. According to their expert, the health officials are challenged because the outbreak is in one of the world’s poorest regions and the health infrastructure is unreliable.

Watch the above video for BBC News’ coverage of what’s happening right now with the Ebola outbreak.

One of the most world’s deadliest viruses, Ebola can very deadly in a short period of time. The fatality rate can reach up to 90%. There is no vaccine for the Ebola virus, which spreads through close human contact. Get more information about Ebola and symptoms here. 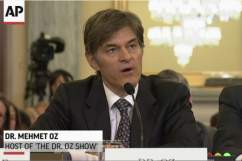 Dr. Oz Questioned and Criticized by Senate over Diet Scams