The first case of the dreaded Ebola virus has been confirmed in the US. A patient in Dallas, Texas, has tested positive for the disease, according to NBC DFW.

1. The CDC Told the Media ‘We’re Confident It Will Stop Here’

The Centers for Disease Control and Prevention Director Tom Frieden told the media that the patient arrived back in the U.S. from West Africa on September 20. The patient didn’t exhibit symptoms until September 24, on September 28 he was admitted to a hospital. Frieden added that he believes the hospital will control the disease. He then reminded the public that “Ebola is not contagious until the patient shows symptoms.” President Obama has been briefed about the situation.

A blood specimen from the patient had been sent to the CDC in Atlanta on September 29.

2. The Patient Has Been Isolated

The patient is being held here, at Texas Presbyterian, the same hospital that treated George W. Bush in 2013. (Google Street View)

The patient is in isolation at the Texas Health Presbyterian Hospital of Dallas. According to the Dallas Morning News:

Dallas County went through a day-long anxiety attack Tuesday, waiting to hear if the first Ebola diagnosis in the nation would happen here.

3. The Patient Has Been to Liberia

Medical workers in Monrovia wear their protective suit before going to the high-risk area of the hospital, the surgical section where Ebola patients are being treated. (Getty)

It had been reported on September 29 that a patient was undergoing tests for the disease in Dallas. The patient’s identity has not been revealed. The person has recently been to Liberia, one of the African nations hit hardest by the Ebola outbreak.

Symptoms for the disease include fever, headache, muscle pain, weakness, diarrhea, vomiting and unexplained hemorrhage. These signs manifest themselves typically 8-10 days after exposure.

5. Somebody Is Benefitting From This Frightening News

As news of the outbreak broke, CNBC reported that “Shares of pharmaceutical companies working on a drug to treat Ebola spiked.” One company, Tekmira Pharmaceuticals, saw its shares rise 20 percent after the news of Ebola in the US broke. 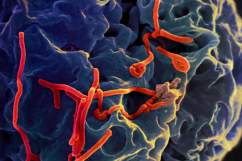 Ebola Virus Pictures: The Photos You Need to See 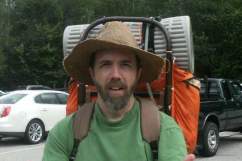