The reason the British Royal family have been forced to announce Kate Middleton’s pregnancy so early is due to her Hyperemesis Gravidarum (HG) diagnosis. In 2012, when Middleton first became pregnant, Buckingham palace admitted that the duchess suffered from the condition. It’s been confirmed that the duchess is suffering from the condition once again.

Here’s what you need to know about this rare condition:

1. The Nausea Can be Worse on the Second Pregnancy

Middleton during her first pregnancy in 2013. (Getty)

Dr. Jennifer Ashton told ABC News that on the second pregnancy, HG can reoccur. Dr. Ashton said: “Sometimes subsequent pregnancies have it starting sooner, lasting longer and being more severe,” she added that the severity of the morning sickness while suffering from HG is “like a hurricane.”

In a UCLA study of 159 sufferers of HG during their first pregnancy, 56 of those women had a second child, in that instance 27 of the 56 suffered HG again.

2. It Affects 2% of Pregnant Women

The 2000 UCLA study indicates that 1 percent of pregnant women suffer from HG. Though in 2014, it’s indicated that it’s now up to 2 percent, reports ABC News.

3. The Condition Is Treated With Fluids

A severe side effect of HG is dehydration, so fluids are the key to combating the aftermath of bouts of morning sickness. CTV News reports that women who have been hospitalized with the condition have fluids administered intravenously. If untreated, HG has been known to cause neurological problems. American Pregnancy says that other methods used to combat HG include Acupressure and ginger or peppermint herbs.

4. The Unborn Is Rarely Infected

Unless the condition goes untreated, their is little or no threat to the unborn. Some cases of untreated HG have resulted in premature birth. The main threat is to the wellbeing and psychological state of the mother, according to American Pregnancy.

5. It May be Hereditary

ABC News’ contributor Dr. Nancy Cossler says that the cause may be related to the high levels of the pregnancy hormone, hCG, which is a portion of the placenta. The English Independent reports that latest theories on the condition have linked it to the parents of the pregnant woman. 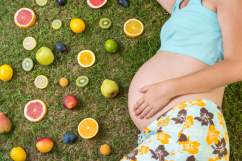