Rep. Adam Schiff led the Democrats’ investigation into President Donald Trump and the impeachment inquiry. Now he’s leading the prosecution in Trump’s impeachment trial. Schiff may not be one of the richest people in Congress, but he’s definitely not poor either. Read on to learn more about Schiff’s net worth.

Adam Schiff had an estimated net worth of $1.74 million as of 2014 and $1.6 million in 2015, according to InsideGov.com and Open Secrets. This was 63 percent higher than the average member of Congress and 104 percent more than the average representative, making him the 146th wealthiest person in the House. His net worth also put him at 21st among all the members from California.

But Open Secrets, in 2015, has a slightly different estimate, placing his liabilities as ranging from $600,000 to $1.2 million and his assets ranging from $878,000 to $2.4 million. A bigger difference, but still not as great as some other people may hold. But what happened to change things in 2016? In 2016, his assets are estimated as slightly higher, ranging from $1.06 to $2.1 million, and his liabilities are still listed as the same two mortgages as the previous years ($600,000 to $1.2 million.) So it’s unclear why his net worth was given a lower estimate overall by Open Secrets in 2016.

3. His Assets Include Stock in Apple

And in 2016, as mentioned above, his assets are actually given a higher estimated range (starting at $1.06 million and reaching the same upper end) and his liabilities are the same. He’s listed as having 26 instead of 33 assets by Open Secrets, but they still include iShares, Fidelity Puritan, and PowerShares. But now Putnam Short Duration Income Fund tops the list, and Apple is lower, at only $50,000 to $100,000 rather than $100-$250k like in 2015.

5. He Has Mortgages on Two Homes

Adam Schiff’s only liabilities are in the form of mortgages that he has on two homes: a Maryland home with at least a $500,000 mortgage, and a California home with a $100,000 mortgage. He and his family lived in California first, before he joined the House. They tried living separately for a while, but didn’t like it. He, his wife Eve and two children ultimately relocated to D.C. from California because they hated the prolonged absences that kept them apart. 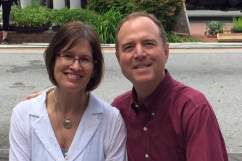 Read More
5 Fast Facts, Breaking News, Democrats, Politics
How much is Adam Schiff's net worth and what is his salary? Learn more here.