Getty Cardi B performs at the 2018 Billboard Latin Music Awards in Las Vegas.

Rapper and reality television star Cardi B, whose full name is Belcalis Almanzar, became famous through sharing viral videos of her career as a stripper (a career she doesn’t regret), and still stays in touch with her fans via Instagram. She’s broken Billboard records, has an extremely loyal fan base, and is expecting a baby with rapper Offset in summer 2018.

Cardi B Net Worth: $4 Million

Cardi B’s net worth is an estimated $4 million, according to Celebrity Net Worth. Though she’s been in the rap and reality TV scene for a few years, it wasn’t until her single “Bodak Yellow” hit airwaves that she made it big.

Fame and financial success haven’t quieted the rapper’s opinions. She’s still outspoken on her feelings about politics and other issues, and her fans love her for it.

Here’s what you need to know about Cardi B’s net worth and growing fame:

1. It Only Took One Hit to Make Her a Multi-Millionaire

Cardi B made her musical debut in November 2015, when, along with Jamaican dancehall singer Popcaan, she remixed Shaggy’s single “Boom Boom.” Her video debut came in “Cheap Ass Weave,”which was, as VH1 said, “legit about cheap ass weaves.”

In September 2016, Cardi B was worth $600,000, but then the single “Bodak Yellow” became a huge success, pushing her net worth to $4 million by September 2017. The breakout single landed her the number three spot on the Billboard Hot 100. The song then became number one in America. In February 2017, she signed a multi-million dollar record deal with Atlantic Records.

Her album ‘Invasion of Privacy’ debuted at number one on the Billboard 200 chart in April 2018. That made it the “second-largest week of 2018, and the biggest streaming week ever for an album by a woman,” according to Billboard. The album earned 255,000 equivalent album units in its first week.

In addition to “Bodak Yellow,” she has four other Top 10 Hits, including “Finesse” with Bruno Mars, “No Limit” with G-Eazy and A$AP Rocky, “Motor Sport,” and “I Like It” with Bad Bunny and J Balvin.

She and Bruno Mars performed “Finesse” at the 2018 Grammys. At the award ceremony, Cardi B was nominated for Best Rap Song and Best Rap Performance for “Bodak Yellow.”

When the news about her nomination in the BET Awards 2017 in the Best New Artist and Best Female Hip-Hop Artist categories came out, Cardi B had just gotten out of the shower and was wearing a yellow towel. Unable to control her joy, she danced in the yellow towel and appeared live on Instagram. “B—h is trending,” she posted on Instagram, thanking her her fans and the judges for selecting her.

It’s not clear exactly how much Cardi B makes from performances, but it’s estimated to be around $100,000 per show. She was paid $170,000 for her Coachella performance. Her former manager, Klenord “Shaft” Raphael, is currently suing her for $10 million, saying Cardi B “froze him out” of her career. He said he was responsible for putting her in touch with songwriters and producers that helped her fame. 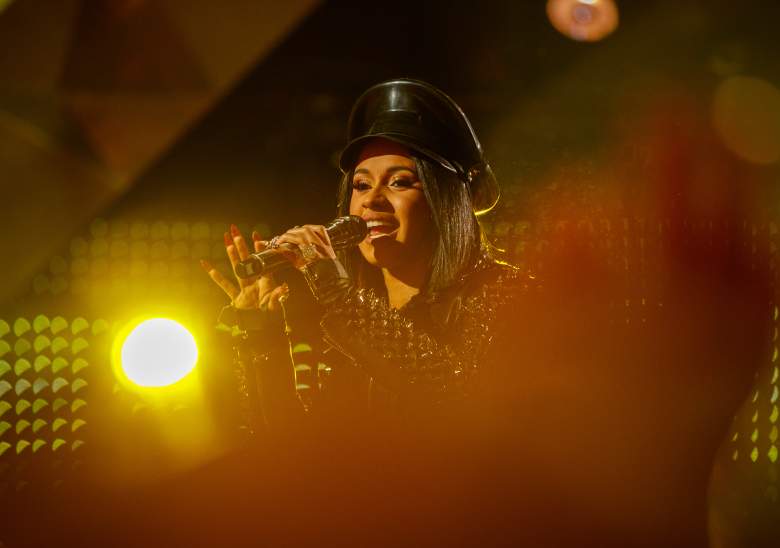 Cardi B performs onstage during the 2018 iHeartRadio Music Awards which broadcasted live on TBS, TNT, and truTV at The Forum on March 11, 2018 in Inglewood, California. / Getty

Cardi B became famous by sharing her life as a stripper on Instagram, which let to a spot on the reality TV show “Love and Hip Hop: New York.” She joined the cast in 2015 in season six, and became a fan favorite for her outspoken attitude and her rocky relationship with her fiance, who was in jail during seasons six and seven. It is unclear exactly how much Cardi B made from her role on the show.

She also appeared in “Uncommon Sense with Charlamagne” and with Khloe Kardashian on “Kocktails with Khloe.” In 2016, BET cast her in the series “Being Mary Jane.” Her character ‘Mercedes’ was described as a “round-the-way beauty with a big weave, big boobs and a big booty to match her oversized, ratchet personality.”

Aside from television and music, Cardi B has a partnership with Steve Madden. Her curated shoe and sunglasses collection with the brand is meant to be affordable for fans. There are sunglasses for around $35, and boots in the $200 range. She also reportedly helped sell Christian Louboutin shoes with her line in “Bodak Yellow” saying “These expensive, these is red bottoms, these is bloody shoes.” Searches for the shoes spiked 217% after the song was released.

3. She Started as a Stripper, Something She Says Shaped Her In a Good Way

Cardi B grew up in the Bronx with her Dominican father and Trinidadian mother. She was reportedly part of a gang, and later joined the Bloods. After working at a grocery store in the Bronx, she became a stripper at age 19. She dropped out of content and starting creating viral online posts about her life as a stripper. She quickly racked up 100,000 followers (today she has 23 million), which helped her catch the attention of the “Love and Hip Hop” producers.

After earning money stripping, she went back to school at the Borough of Manhattan Community College, but did not finish her studies. She claims that stripping pulled her out of a disturbed relationship and made her confident. The manager of Club Lust, where Cardi B worked, said she put a lot of effort into her outfits. “She put a lot of time and effort into these elaborate outfits, which were always very bedazzled, bright colors — erratic in a good way,” he said. On some nights, she made up to $2000. In an interview with Rolling Stone, she said: “A lot of people wonder, ‘Why would anybody want to be a dancer? Because there’s money!”

She also talked about her background with the Guardian, where she said she’s proud of her past. “Would people feel some type of way if I was a cashier-turned-rapper?” she said. “People want me to be so full of shame that I used to dance. I would never be ashamed of it. I made a lot of money, I had a good time and it showed me a lot – it made me open my eyes about how people are, how men are, about hunger and passion and ambition.”

4.  She Loves Cars and Her Fiancé Offset

Cardi B doesn’t have a driver’s license, but she has a pretty nice car. She paid $240,000 for an Orange Bentley Bentayga, which she posted on Instagram. She also said, “I don’t know how to drive but how you expect me to know how to drive when I took the train my whole life?”

On her fiancé Offset’s 26th birthday, Cardi B gifted him a $300,000 Rolls Royce and a diamond encrusted Rolex. Speaking of future cars she might own, she has said, “You wanna know something? I think I want a Lamborghini truck. I need a baby car, even though I don’t drive.”

She and Offset are engaged and expecting a baby in July 2018.

Throughout her career, from stripping to rapping, Cardi B has been vocal about her opinions. Lately, she’s taken her voice to political issues. In response to President Trump suggesting that teachers should be armed, she said on Instagram:

“Imagine an old ass female teacher bussing a burner. This man really out his mind. America must be entertainment to other countries.”

In March 2016, she posted a message to her fans on Twitter warning about Trump’s views on immigration and urging her fans to vote for Bernie Sanders. The caption read, “like it’s not funny anymore.”

At the 60th Grammy awards, when she was asked to read out an excerpt from the book “Fire and Fury” by Michael Wolff as a skit in the show, she said: “Why am I even reading this s–t? I can’t believe this. I can’t believe — this is how he really lives his life?”

Cardi B’s fans have encouraged her to run for president. In response, she made a joke announcement and said she would ask ISIS to “such a d—k”.

She also called President Franklin Roosevelt the real ‘Make America Great Again’ man. Cardi B has the same birthday as Eleanor Roosevelt, and admires the first lady for her for the humanitarian causes and advocacy for the African American community.

When Trump calling El Salvador, Haiti, and other nations “s–t hole countries”, Cardi took to twitterand said,“Trump is so disgusting. I hate him so much. I am starting to hate him with a f—–g passion.”

This tax season, she also demanded to know where her money was going. “What ya doing with my fucking money?” she asked the IRS in an Instagram video. “I want to know what you’re doing with my tax money because I’m from New York and the streets is always dirty. We was voted the dirtiest city in America. What is y’all doing?”

She’s pledged to be a role model for her future child and for little girls who look up to her.  “I realized, after Halloween, a lot of little girls, they be looking up to me. They love me, and I’m thinking to myself, like, ‘Yo, I really need to be a better example,” she said in an Instagram video. I’m gonna change for you, little girls, because I deadass love ya.”