With a net worth of $33 million, according to Forbes, Chance the Rapper is often  on lists of the highest paid hip-hop artists. As an independent artist who has not sold any physical albums throughout his career, Chance makes most of his money from streaming music, concert tours, and lucrative endorsement deals.

Chance the Rapper Net Worth is $33 million

The musician, whose real name is Chancelor Jonathan Bennet, made it his goal to be a successful rapper from a very early age. He began rapping when he was in 6th grade, but it was in high school in Chicago that his dream started to take shape. During a ten-day suspension from school, Chance began to work on his first music project, which would debut two years later. He named the mixtape “10 day” in honor of the suspension period. The project was included in Forbes’ cheap tunes column, which called it “a noticeably strong first effort from a member of a thriving young hip-hop scene.”

Today, with influences from the likes of Michael Jackson and Kanye West, as well as from Jazz and Gospel, the rapper’s music has millions of streams on various platforms.

Chance’s style of making money is outside of the norm, and streaming his music for free has given him respect from his audience. He has also developed a connection with his fans because his songs contain profound social criticism. He dedicates his time and money to helping others as well, and he is very open about his political opinions.

Here’s what you need to know about Chance the Rapper’s net worth and how sh makes his money:

1. He Profits From His Music In an Unconventional Way 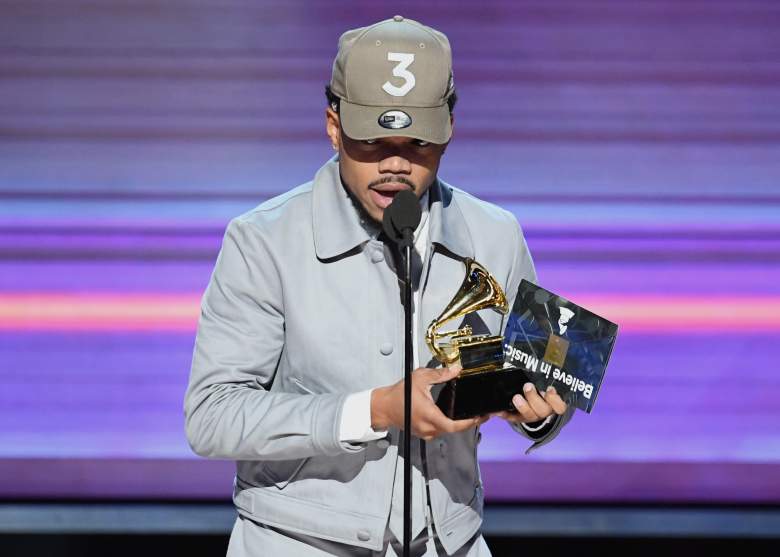 One of the aspects that sets Chance apart from other musicians in the industry is that he is not signed to any record label. The musician has released his music for free on streaming services such as Apple Music, SoundCloud, and Spotify. He told Vanity Fair, “I never wanted to sell my music, because I thought putting a price on it put a limit on it and inhibited me from making a connection.”

This different path has not prevented Chance from becoming incredibly successful. His second official mixtape, “Acid Rain,” earned a diamond certification from mixtape distribution platform DatPiff, which is only given to those who accumulate over one million streams. His following work, Coloring Book, debuted at number 8 on the US Billboard 200 chart due to having been streamed over 57 million times on one single platform during first week. Both albums received generous critical acclaim.

On Spotify, he has 9,586,590 monthly listeners. The average payout to artists is between $0.006 and $0.0084 per stream. For his album “Coloring Book,” Chance had an exclusive deal with Apple Music for first streaming rights. He was paid $500,000 for exclusive streaming rights for the first few weeks. Some fans were upset about the move (though Apple did offer it for free, even to non-subscribers), because the music wasn’t released on SoundCloud for three weeks. Chance responded by saying:

I think artists can gain a lot from the streaming wars as long as they remain in control of their own product. If you come across opportunities to work with good people, pick up cash and keep your integrity I say do it.

He has reportedly turned down $10 million offers from record labels to keep streaming his music for free, and even rejected an offer from his mentor, Kanye West.

Chance has made a name for himself by collaborating with other artists. In “Acid Rain,” he had the support of artists such as Childish Gambino and Vic Mensa. His third mixtape featured Kanye West, 2 Chainz, and Young Thug, among others. He worked alongside Kanye West in his album “Life of Pablo,” in which Chance co-wrote various songs. He has also appeared on other people’s work, such as Macklemore & Ryan Lewis’s album “This Unruly Mess I’ve Made,” and in Skrillex’s song “Show Me Love.” All of these collaborations have contributed to Chance’s fortune. In 2015, he appeared in Forbes‘ 30 under 30 music list. He was also featured in two Forbes lists in 2017: he was number 5 in the highest paid hip-hop artists in the world list and number 15 in the celebrity 100 newcomers.

Chance’s talent has been rewarded multiple times. Most notably, he has won three Grammy Awards for Best New Artist, Best Rap Performance, and Best Album. Streaming albums were considered for Grammy awards for the first time in 2017. He also shared an Emmy nomination with the cast of Saturday Night Live for their performance of the song “Last Christmas.”

2. He Makes Most of His Money From Tours and Merchandise

Live shows are Chance’s preferred way to interact with his fans, and they are also one of the best ways to promote his music. In 2017 he headlined Lollapalooza in Chicago. His performance was widely acclaimed, and it has been thought to have attracted one of the largest audiences since the festival’s revival in 2005. Other tours include the Magnificent Coloring World Tour and the Be Encouraged Tour, which have taken him to various cities in America and Europe. The Be Encouraged Tour drew at least $500,000 in ticket sales each night in cities where numbers are available. 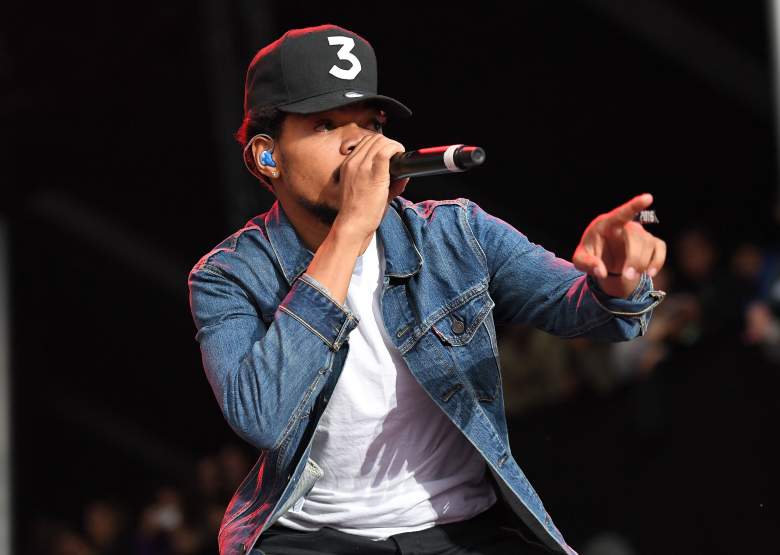 On a smaller scale, Chance had a tour around several American colleges in the fall of 2014, visiting institutions such as Poly Pomona, St. Louis University, University of Kentucky, and Virginia Tech, among others. This tour propelled the idea for a major source of revenue for the musician: his merchandise line. During the tour, Chance and his team sold locally-themed items. Ever since, Chance’s ingenious merch has become a pillar of his relationship with his audience. He sells products such as hats, t-shirts, lighters, and stickers on his website as well.

“I make money from touring and selling merchandise,” Chance once told Vanity Fair, “and I honestly believe if you put effort into something and you execute properly, you don’t necessarily have to go through the traditional ways.”

Chance also profits from the VIP packages that he started to sell in his spring tour of 2017, which offer experiences such as a hand-paper-scissors tournament with Chance for $75 or selfies to be tweeted from his personal account for $250.

3. He Understands the Power of Endorsements

Chance’s image is not only used for his own merchandise. The rapper became the face of the #ThankUObama clothing line launched by Canadian retailer Joe Fresh. The line pays tribute to Barack Obama and his family. The musician has a long history with the former president–his father worked with Obama when he was still a senator.

Chance has partnered with Dockers, teaming up with the company for its Get Ready series. He also starred in H&M’s ad campaign for their 2016 Kenzo collection. In addition, he was part of Nike’s campaign “Unlimited Together,” honoring USA Basketball players. The musician created an original song to be featured in a short film released by Nike as part of the campaign. His earnings for these deals are unknown.

He is also club ambassador for the Chicago White Sox. Apart from participating in activities for the club’s promotion, the musician designed a limited edition line of hats, which sold out “within minutes.” The White Sox vice president of sales and marketing said that they had chosen the musician for this campaign because its objective is to “talk to those who are […] younger, to develop interest from the Hispanic and the African-American markets. Chance resonates with them.”

4. Despite His Fame, He Has Been Deemed One of the Most Humble Artists In Hip-Hop

Not much has been reported about the way Chance spends his fortune when it comes to personal matters. His most well-known expense is the purchase of his home at 600 Fairbanks Court, Chicago. The downtown property had been listed for a little over $4 million, but Chance sealed the deal for $3.7 million. According to NBC Chicago, the two-bedroom property measures 4,500 square feet, has large glass windows with views over the Chicago skyline, and includes three decks, a gym, a spa, a soundproof library, a bar, and a sauna.

Not much else is known about his spending habits, as he rarely goes out to Chicago clubs or expensive restaurants, and spends time at home with his girilfriend and their daughter.

Happy Birthday To #InternationalWomensDay from me and Kensli.

He has expressed his feelings regarding money in his song “First World Problems,” which he debuted on The Late show with Stephen Colbert. In the song, Chance compares record label offerings to the apple tree that tempted Adam and Eve in paradise. The lyrics also talk about the the fact that money cannot give you spiritual peace and cannot make you a good father.

5. As a Socially Conscious Citizen, Chance Invests In Giving Back

Chance has been involved in a number of charitable causes focused on Chicago. He founded Social Works, a nonprofit organization whose objective is “to empower youth through the arts, education, and civic engagement while fostering leadership, accessibility, and positivity within the youth throughout Chicago.” This organization has raised $2.2 million for public schools in Chicago, adding to the $1 million Chance donated in 2017. Chance and other artists met with president Obama to discuss My Brother’s Keeper Challenge, an initiative aimed at helping “younger generations of blacks and other minorities stay on the right path.” He also partnered with The Empowerment Plan, a humanitarian organization. Chance announced his Warmest Winter Initiative to raise $100,000 to provide the homeless people of Chicago with coats for the city’s harsh winter.

Though he considers himself an independent voter, Chance has supported Obama on numerous occasions and generally leans towards the democratic side of politics. He volunteered for Obama’s reelection campaign in 2012, and in 2017 he performed at the Obama Foundation Summit. In the latest presidential elections, Chance offered his support to Hillary Clinton, claiming that he felt a “certain sincerity to her” and that he thought she would be committed to helping Chicago.  As matter of fact, he led the youths of the city in a march to the voting polls after having performed a concert for them.

This was a formal handshake in transition. It ended very black ??

Although he has been very vocal about his disapproval of President Donald Trump, Chance generated controversy for defending Kanye West, who expressed his allegiance to Trump. However, a few days later, Chance took to twitter again to apologize and explain that he had acted out of a protective instinct of Kanye but that he would “never support anyone who has made a career out of hatred, racism and discrimination.”