Lovable daytime television host Ellen DeGeneres was the first openly gay woman in entertainment to play an openly gay character on TV in her since-ended sitcom Ellen. A 2015 poll showed that she did more to change the conversation around LGBTQ rights than any other celebrity.

She’s also extremely good at making money. When not appearing on television or in movies, DeGeneres flips houses for impressive profits, runs a powerful digital empire and has lucrative endorsement deals. She donates much of her fortune to charities and is an animal rights activist. She and her wife, Portia de Rossi, founded The Ellen DeGeneres Wildlife Fund in 2018.

Ellen DeGeneres’ net worth is $490 million, as estimated by Celebrity Net Worth. Most of her income comes from The Ellen DeGeneres Show, where she earns $75 million a year. In 2019, she earned $80.5 million, according to Forbes, thanks to the show plus endorsements and production deals.

Here’s what you need to know about Ellen DeGeneres’ net worth and how she makes her money:

1. Ellen DeGeneres’ Salary Is $77 Million a Year From Her Talk Show

DeGeneres grew up in Louisiana and studied communications at the University of New Orleans for a semester, but left college to work at TGI Friday’s, as a law clerk, and in other odd jobs. She started performing in comedy clubs in New Orleans and eventually started touring around the country.

In 1982, Showtime named her the Funniest Person in America, leading to appearances on the Tonight Show and eventually her own television show. She was nominated for three Grammy awards for her comedy, one for Best Comedy Album for “The Funny Thing Is…” in 2005, and one for Best Spoken Word Album with “Seriously…I’m Kidding” in 2013. She was also nominated for Best Comedy Album for “Ellen Degeneres: Relatable” in 2020.

Her first major role was in a sitcom called Ellen on ABC, which aired in 1994 and lasted five seasons. In February 1997, Ellen’s character came out as gay, a major moment in TV history. That same year, Ellen herself came out on the Oprah Winfrey Show. DeGeneres was nominated for three Golden Globes for her role as Ellen.

DeGeneres launched the Ellen DeGeneres Show, now The Ellen Show in September 2003 with NBC Universal. The show has since won 59 Daytime Emmy Awards. When she won her tenth Emmy for Best Entertainment Talk Show in 2017, she beat a record previously held by Oprah Winfrey. She also beat a record when she won her 20th People’s Choice Award. It is one of the most-watched shows on daytime TV. On YouTube, her channel averages more than 300 million views per month and has over 35 million subscribers. It has generated more than 18 billion video views overall. According to Social Blade, the YouTube channel is the 29th most subscribed channel on the site.

DeGeneres makes $77 million per year from her talk show, according to Celebrity Net Worth.

A popular feature of her show is the intro, which includes DeGeneres dancing to different songs as she makes her way through her studio audience and to the stage. In 2009 record labels sued her for using more than 1,000 songs without a license. The lawsuit was filed by Sony Corp’s Sony Music Entertainment, Warner Music Group, Vivendi SA’s Universal Music Group, and EMI Group in Nashville, Tennessee. The defendants said they didn’t “roll that way,” when asked why they didn’t seek permission, according to Rolling Stone. A spokesperson for the Ellen DeGeneres Show said they were working toward reaching “amicable and reasonable terms” with the labels, but the outcome of the deal was never made public.

2. She Owns the No. 1 Selling Game on Apple’s App Store & a Digital Venture Company 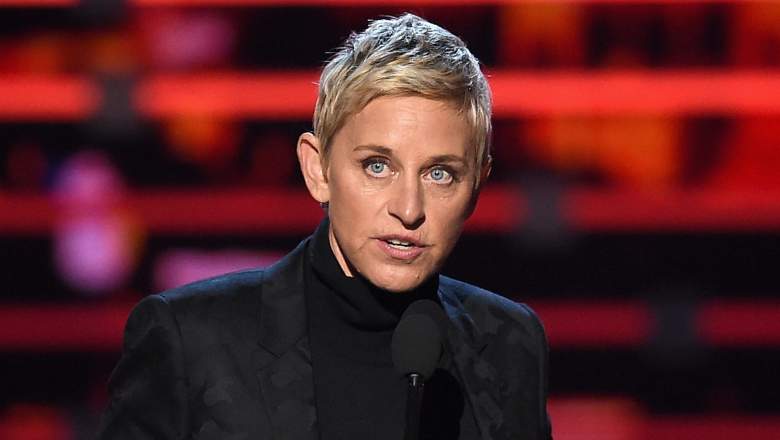 Aside from her show, DeGeneres owns Ellen Digital Ventures, which she launched in 2016 in partnership with the Warner Bros. Television Group. A press conference about the launch stated:

The Ellen Digital Network will build upon the success of Ellen’s digital destination ellentube and “The Ellen DeGeneres Show” website EllenTV.com, as well as her official YouTube channel, wildly popular social media following and popular game Heads Up! to create a robust, premium cross-platform advertising and integration opportunity for brands to associate with the compelling and engaging original content Ellen produces and distributes, in a positive, high-quality environment.

The venture came after the success of Heads Up!, which was the number one paid app in the Apple app store in 2014 and 2015 with more than 24 million downloads. According to Forbes, Ellen Digital Ventures is a multi-million dollar enterprise.

3. From Movies to Makeup, She Makes Money in Many Ways 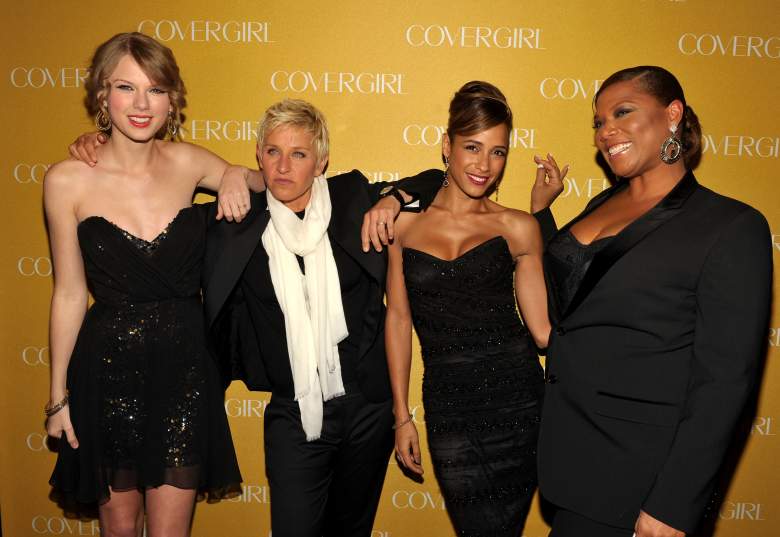 DeGeneres played the voice of Dory in Finding Dory, a huge box office success. The movie was the highest-grossing animated movie ever in the United States, raking in $445 million in its first month. It’s $136.2 million opening was the biggest domestic opening for an animated movie. DeGeneres also worked on Finding Nemo and was previously in the movies Mr. Wrong and EdTV.

In 2010, she was a judge on American Idol. It is unclear how much she made for her short-lived judging career, but other judges have made between $6 and $25 million.

She has also hosted the Primetime Emmys and the Academy Awards (which in turn won her an Emmy herself in 2014). Celebrity Net Worth claims that DeGeneres was paid $1 million for hosting the Oscars. However, the Hollywood Reporter reported that the 2013 hosts made between $25,000 and $35,000, so it’s not clear how much DeGeneres was actually paid.

In 2017, she announced a new Netflix special. The special was added to the platform in December 2018. It has been reported DeGeneres was paid between $20 to $25 million for the special.

“It has been 15 years since I did a stand-up special. 15 years,” she said in a statement prior to the release. “And I’m writing it now, I can’t wait. I’ll keep you posted when and where I’m gonna shoot my Netflix special. I’m excited to do it; I’m excited for you to see it.”

She has also had a few lucrative endorsement deals, namely with CoverGirl, Vitamin Water, and American Express.

“Her beauty and down-to-earth personality fit perfectly with what CoverGirl represents,” said a CoverGirl spokesperson when DeGeneres became the spokesperson for the Simply Ageless line.

4. She’s a Master at Flipping Homes for Millions

Ellen DeGeneres and her wife Portia de Rossi arrive at an Ellen DeGeneres Welcome Party on March 26, 2013, in Melbourne, Australia. DeGeneres was in Australia to film segments for her TV show. (Getty)

One of DeGeneres’ books, Home, discusses one of her favorite topics: house flipping. She has owned and sold seven homes from 1996 to 2016, and 12 total. According to Forbes, she’s one of the biggest celebrity home flippers. “Her real estate ventures range from a $1.2 million treehouse to a $12 million Malibu beach estate and a $40 million mansion that she flipped for a $15 million profit. She has rented to Nick Jonas and sold to Ryan Seacrest, among other celebrity A-listers,” Forbes says.

More recently, she sold a Santa Barbara home for $45 million and bought a beach house in Carpinteria for $5.4. The 6,000 square foot home on the water has four bedrooms, four and a half bathrooms, a chef’s kitchen, a wet bar, a tennis court, a courtyard, a plunge pool, and a guesthouse. It is now for sale, according to CNBC, for $24 million.

5. She Surprises Her Audience With Gifts & Money

Dierks Bentley Makes a Life-Changing ContributionContribution The country star was here for an incredible performance, and he also gave an incredible gift: $50,000 of his own money to a military family that really needed the help. Watch the emotional encounter right here.2012-02-15T06:15:06.000Z

DeGeneres is known for giving her audience gifts like trips, books, and even money. In February 2018 she gave away $1 million to her audience. Oprah, who also gives her audience large gifts, asked DeGeneres in O Magazine why giving gives her joy.

She also gives large sums to animal welfare. In 2013, she gave $25,000 to help the Humane Society fight Ag Gag bills.

“I’ve been really concerned. I’m seeing more and more states considering what are called Ag Gag or anti-whistleblower bills. And we have undercover investigators who go find terrible things at factory farms, or at puppy mills or at horse stables where people are injuring the horses,” the president and chief executive of the Humane Society said. “They’re trying to make it a crime for us to take pictures or video of animals in these settings, because so many of our investigations have yielded incredible results.”

In 2009, she was named Woman of the Year by PETA because she stopped eating or using animal products. She has since said she is not vegan anymore, but her wife is.

When 281,000 acres were burned in wildfires in Southern California, she gave $14,500 in gift cards to the fire team deployed to the area. She’s also donated to saving elephants, given $500,000 to a school in Detroit, given $50,000 to a military family, and raised $3 million for The Humane Society and St. Jude’s Children’s Hospital through her “Oscar selfie.”

Read More
5 Fast Facts, Celebrities, Ellen DeGeneres, Net Worth
Ellen DeGeneres is one of the most popular hosts on daytime TV, with hundreds of millions of viewers and a net worth of $400 million.