Michael Jordan’s net worth is $1.65 billion, according to Forbes. During his storied NBA career, Jordan earned $90 million. The rest of his worth comes from team ownership and his partnership with Nike, among other endorsements.

Forbes reports that he has earned $1.4 billion from corporate partners, which include Nike, Gatorade, Hanes, and Upper Deck. In 2010 Jordan bought a majority stake in the Charlotte Hornets, and the team helped his net worth rise by $350 million in just one year.

Jordan owns several homes and cars, and donates to charities like the Boys and Girls Club of America.  Until recently, he was silent on politics, but that changed with a $2 million grant to help build relationships between police and their communities.

1. Michael Jordan’s Salary Was Huge for the Time, and He Still Holds Records

In the 1997-1998 season, Jordan made $33.1 million, the highest ever salary for one season in the NBA. According to Forbes, Jordan is the highest paid athlete of all time, once endorsements are included. 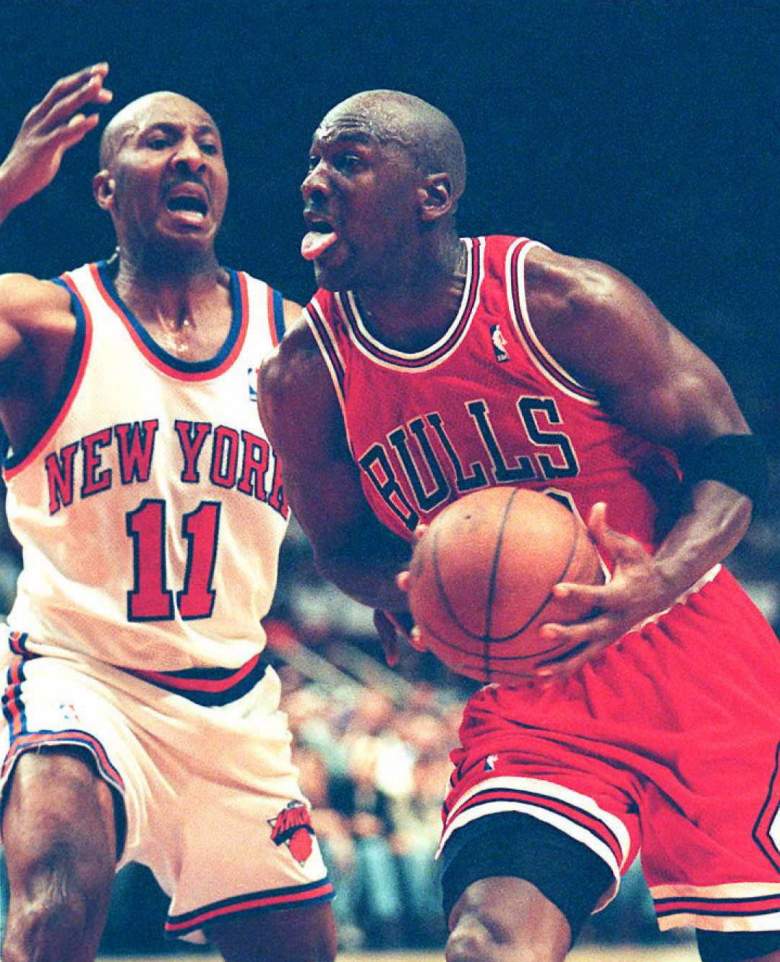 He was named Most Valuable Player five times, has ten All-NBA First Team designations, three All-Star Game MVP Awards, ten scoring titles, and six NBA Finals MVP Awards, among other accolades. He holds the record for highest career regular season scoring average and highest career playoff scoring average, and ESPN named him the greatest North American athlete of the 20th century. He’s been inducted into the Basketball Hall of Fame twice, first in 2009 for his career, and again in 2010 as part of the US men’s Olympic basketball team.

2. His Deal With Nike Made Both Him and the Brand Millions

Jordan has made $100 million from his relationship with Nike, which started in 1984. When he started with the brand, they offered him$500,000 a year in cash, for five years. Nike added in stock options so that Jordan would earn $7 million over the five years, according to ESPN. From there, Jordan’s agent and Nike came up with the Air Jordan brand. The Air Jordan Is hit stores in 1985, selling for $65, which was high for the time. By May of that year, Nike had sold $70 million worth of the shoes and by the end of the year the brand had made more than $100 million in revenue, according to ESPN. Air Jordan’s best year ever was in 2012, when it sold $2.5 billion worth of shoes. They make up 58% of all basketball shoes bought in the United States. In the 2017 fiscale year, the brand generated $3.1 billion in revenue, and Jordan made more than $100 million. Now the line carries more than 20 styles, and though many of the kids who buy the shoes weren’t old enough to see Jordan play, he’s still making millions from sales.

During his career, Jordan had his name on Wilson basketballs and his face on Wheaties boxes. He endorsed Hanes, Gatorade, McDonald’s, and tuxedos, among other things.

In 1996, Jordan starred in “Space Jam,” the cartoon Looney Tunes movie that also featured Patrick Ewing, Muggsy Bogues, Charles Barkley, and Bill Murray. It’s not known how much Jordan made for the movie, but it ended up bringing in $230 million in ticket sales worldwide, and more than $1 billion in merchandise.

He also owns Michael Jordan Steakhouses around the country, though it’s unclear how much he makes from them.

3. He Bought a Failing Team, Adding $350 Million to His Worth in One Year

In 2010, Jordan invested $175 million for a majority stake in the Charlotte Hornets, after owning a minority stake since 2006. He replaced Robert L Johnson to become the majority owner of the club–he owns about 90%. The team is not good. They have missed the playoffs 11 times since their relaunch in 2004. Still, despite lack of athletic ability, the team is becoming popular. When Jordan bought the Hornets, most of the $175 million he paid was to cover the team’s debt. He also promised to fund future losses. Because of the Jordan name, and because he changed the team name from the Bobcats back to the original Hornets, the team has gained fans. For a decade, it had some of the lowest attendance in the NBA, but in 2017 it was up to 17th and had 17,332 fans per game. However, in 2018 it dropped to 26th.

In 2018, Forbes valued the Hornets at $1.05 billion. With that ranking, every NBA team is now worth more than $1 billion. It also helped to increase Jordan’s net worth by $350 million. Though the team still ranks near the bottom of the NBA franchises, it’s value increased by 35% over the last year.

4. He Spends on a Lavish Lifestyle, Including a Branded Private Jet

He owns a  a $280,000 home in Miami and a home in Charlotte, North Carolina, which has lake views and cost $2.8 million. He also owns a condo in Highland Park, near Chicago, which he’s trying to sell. It was originally listed at $29 million, but went down to $14 million in 2015 and is still on the market.  It has its own basketball court and a large pool.

Jordan is something of a car collector. His collection includes a black Range Rover, a Cadillac XLR, and a Mercedes-Benz McLaren that goes from zero to 60 miles per hour in just under 3.6 seconds. He also owns a Ducati 999.

Jordan’s Gulfstream IV private jet has two Rolls Royce engines and can carry 19 passengers. It has its own chef and flight crew and displays his jersey number (23), and the number of titles he’s won (6). In other branded forms of transportation, his custom golf cart bears the Jump Man logo. He also owns a dozen Rolex watches, many of them limited edition.

5. He Gives to Charity, but Until Recently Was Silent on Politics

In 2017, Jordan donated $7 million to medical clinics in Charlotte. It was his largest philanthropic donation ever, according to CBS Sports.  The millions funded two clinics–the Michael and Novant medical centers.

In 2015, he won $8.9 million in a lawsuit against a grocery chain for using his name without permission, and he donated all of the settlement to 23 non-profits that help Chicago Children.  While announcing the donation, Jordan said, “I care deeply about the city of Chicago and have such incredible memories from my years there. Chicago has given me so much and I want to give back to its kids – the city’s future.”

He also donated $2 million to improve relations between the community and the police. Of the $2 million, half went to the NAACP Legal Defense Fund, and half to the International Association of Chiefs of Police’s Institute for Community-Police Relations. He also gave $5 million to the African American History and Culture Museum.

Where other athletes are outspoken on social issues, Jordan has remained quiet. In a 2015 NPR interview, Kareem Abdul-Jabbar said Jordan chose “commerce over conscience.” Jordan was criticized for saying “Republicans buy sneakers too,” when asked why he didn’t campaign for Democrats for political office.

In 2016, Jordan said he could “no longer stay silent,” and spoke out against gun violence. In a letter written for ESPN, he said:

“As a proud American, a father who lost his own dad in a senseless act of violence, and a black man, I have been deeply troubled by the deaths of African-Americans at the hands of law enforcement and angered by the cowardly and hateful targeting and killing of police officers,” Jordan writes in a one-page letter released exclusively to The Undefeated. “I grieve with the families who have lost loved ones, as I know their pain all too well.”

In the letter, he announced his $2 million grant for community building. He also supported NBA stars who chose to kneel in protest against police violence. He said:

“One of the fundamental rights this country is founded on was freedom of speech, and we have a long tradition of nonviolent, peaceful protest. Those who exercise the right to peacefully express themselves should not be demonized or ostracized.”