Rihanna’s sex appeal has always been part of the image she’s built as one of the biggest pop stars on the planet. Now, she’s using it to promote a new lingerie line that should add to the massive fortune she’s built over the years.

The lingerie line, Savage X, launched in May, and Rihanna kicked it off with a bang, posting a racy video on Twitter that got more than 300,000 views in the first 12 hours after she published it.

Rihanna’s net worth is $245 million, according to an estimate by Celebrity Net Worth.

Rihanna primarily earns her income from music sales, but has a few other ventures as well. One is Fenty Beauty, which is worth $72 million according to The Daily Mail. Others include endorsements with brands like Gucci, Clinique, and Cover Girl.

Here’s what you need to know about Rihanna’s net worth and income sources:

1. Rihanna’s Earnings Keep Climbing, Thanks to Tours and Vevo

On the Billboard charts, Rihanna has had 14 number one hits, 31 top 10 hits, and 61 songs on the charts. Her top number one hit is “We Found Love,” followed by “Disturbia,” then “Work.” Her total album sales are 9.8 million, and all but her first album have sold at least a million copies.

In 2017, Rihanna was the number one most streamed female artist for the third year in a row, ahead of Taylor Swift. She has almost 22 million followers.

shout out to the big homie GOD! big ups to all the fans and streamers for the support when sis ain't even had an album out. 2017! @spotify #BlackGirlMagic

She received more than 654 million streams on Spotify for the song “Work” with Drake, earning approximately $2.6 million in revenue. As of March 2017, her single “Needed Me” had 458 million streams and Four Five Seconds had 372 million, earning additional royalties over $3.2 million in 2017.

She earns much of her income from her music tours. Rihanna: Live in Concert in 2006 brought in about $18 million and her concert earnings have grown steadily up from there. Her most lucrative concert tour, the Diamonds world tour ,brought in about $121 million.

2. Rihanna’s Brand Partnerships Are Proven to Outsell Other Celebrities

In 2014, Rihanna partnered with Puma to publish the Fenty Puma Creeper shoe line. She then became the athletic brand’s creative director and launched an athleisure line of products–the Puma by Rihanna collection of 2016. She signed a $1 million contract with Puma saying she wouldn’t wear other brands in 2014. Puma’s profits increased by 11.2% after signing the artist.

The second drop of #FENTYxPUMA SS18 hits stores May 3rd. Race Jacket out June 14th! Ready for another heat wave? ?

She has also collaborated with the Mac Cosmetics and released her signature line called “RiRi Hearts MAC.” She also designed a collection for Swiss jewelry maker Chopard called “Rihanna loves Chopard.” Each piece starts at $1000 and goes up to $11,000. In 2016, she signed a a $10 million deal with Louis Vuitton to launch her own line of products. In 2015, she signed a $25 million contract with Samsung  to promote the Samsung Galaxy line.

While many celebrities endorse products, Rihanna might be the best at it. NPD Group, a company that analyzes brand and celebrity pairings, found that Rihanna’s have specific preferences for products she uses and endorses, Forbes reported. Her fans are 3.7 times as likely to purchase from Rihanna than from other celebrities. Rihanna has 54 million Instagram followers and 73.9 million Twitter followers, who she promotes to regularly, making her a good investment for brands.

3. Rihanna’s Beauty Line Filled a Niche & Is Making a Profit

When Rihanna launched Fenty Beauty in 2017, she was credited with “changing the conversation around beauty.” Allure magazine wrote: “Fenty Beauty’s success is undeniably tied to the fact that, with 40 shades of high-quality foundation, it appeals to women of all skin tones, who can also see themselves in the line’s widely inclusive ad campaigns and are often excluded from other cosmetics collections.”

#BEACHPLEASE we only 2 days away from #bodylava domination!!! Wait until you smell how delicious this is!! @fentybeauty April 6.

The line earned $72 million in media value in a single month, according to The Daily Mail. Around 132 million people watched Fenty Beauty tutorials in September 2017.

Fenty Beauty is sold only through Sephora and was set to outsell Kylie Jenner and Kim Kardashian West’s beauty brand’s combined as of January 2018. West’s brand users spend around $278 on cosmetics per year, and Jenner’s spend around $181. Meanwhile, Rihanna’s brand users spend on average $471 per year on cosmetics. As of January 2018, Jenner’s brand had sold $420 million in products, according to WWD.  West and Rihanna’s numbers had not been released, but it’s clear Rihanna’s brand was selling in the hundreds of millions. Fenty Beauty started as a partnership with the Kendo division of LVMH Moet Hennesy Louis Vuitton. 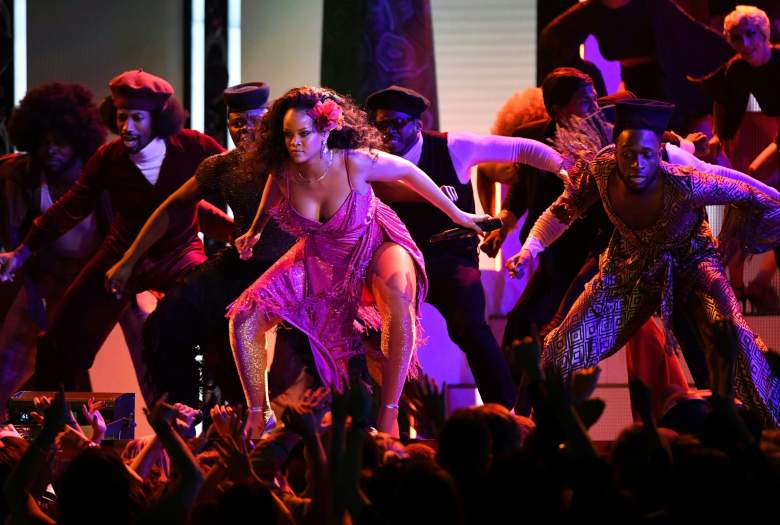 In 2017, Rihanna bought a Spanish-style five-bedroom house in Beverly Groove for $2.75 million, but sold it for $2.85 million only three months later.

In August 2017, she bought a Hollywood Hills house for $6.8 million. The 7,000 square foot house sits on a half-acre of land, overlooking Sunset Strip. It has a private gate and an infinity pool, a chef’s kitchen, large living room and dining room areas, an in-house movie theater, a master suite and three additional suites, and nine bathrooms. There’s also a guest house used as a fitness center.

She also owns a $14 million penthouse in Manhattan that’s currently up for sale.

Finally, she has a $22 million mansion in Barbados, with a private beach, a golf course, a tennis court, a large terrace, and two docking areas for yachts.

She also owns a few luxury cars, including a Porsche, a Lamborghini, a Mercedes Benz, a Mini Cooper, and a Jaguar. She also travels often by private jet.

5. Rihanna Donates Large Sums of Her Wealth to Charity, and Has Her Own Foundation 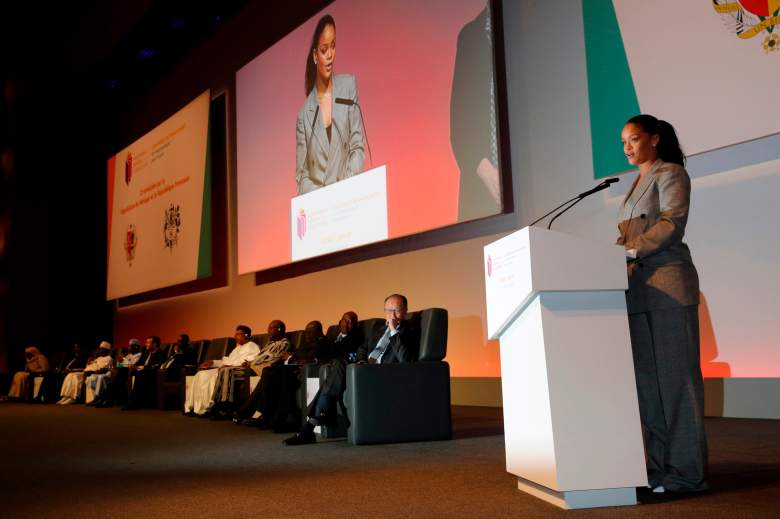 Barbadian singer Rihanna addresses the conference “GPE Financing Conference, an Investment in the Future” organised by the Global Partnership for Education in Dakar on February 2, 2018. / Getty

Rihanna founded the Clara Lionel Foundation in 2012 and has since raised tens of millions of dollars for education and health efforts around the world. The foundation was named in honor of Rihanna’s grandparents, Clara and Lionel Braithwaite. According to the foundation’s website, “CLF supports and funds groundbreaking and effective education, health and emergency response programs around the world. With the voices of Rihanna and her fans, CLF also engages in global advocacy with the goal of improving the quality of life for young people everywhere. ” Current programs include a global scholarship program, a center for oncology and nuclear medicine at the Queen Elizabeth Hospital in Barbados, and a micro grants program in Barbados.

Rihanna was also an ambassador for UNICEF’s Tap Project in 2011, which aimed to bring clean water and sanitation to children around the globe.

In 2014, she partnered with MAC cosmetics on their Viva Glam lipstick line. Proceeds from the line go toward helping women and children with HIV/AIDS. “I like to use my voice in very powerful ways and this was something close to my heart, so what better people to team up with when you want to get to the source of something like this than the MAC AIDS Fund,” Rihanna said at a MAC event.

In 2008, Rihanna performed “Just Stand Up!” live on the television special Stand Up to Cancer, which helped raise $100 million for cancer research. In 2012 she performed at the House of Blues in Los Angeles for a benefit for the Children’s Orthopedic Center and the Mark Taper-Johnny Mercer Artists Program.

In addition, she has contributed to many organizations, including the Alzheimer’s Association, the Entertainment Industry Foundation, City of Hope, the Grammy Foundation, Live Earth, Hope for Haiti Now, Kids Wish Network, MusiCares, the Red Cross society, Cartier Love Charity Campaign, and Chime for Change.