Senate Minority leader Charles Schumer is worth $0.5 million according to Roll Call, making him the 274th  member of Congress when ranked by income, and the 73rd senator. The New York Democrat won reelection in his fourth term by more than 40 percentage points in 2016, and he was unanimously elected to replace Harry Reid (who was retiring) as minority leader. He is the first New York senator to hold the position.

Chuck Schumer Net Worth is $0.5 million

Schumer has worked in politics his entire career. He attended Harvard, where he became interested in politics and campaigned for Eugene McCarthy, then attended Harvard Law School. After graduating and passing the New York State Bar, he ran for and was elected to the New York State Assembly. He’s been working in politics ever since, making a set government salary for four decades. As a member of Congress, Schumer gets health insurance through the Affordable Care Act and has other benefits including a lifetime retirement package.

Since 1989, Schumer has proven to be one of the most successful fundraisers in the Democratic party, raising at least $10 million almost every year. He owns a nice home in Brooklyn and lives in a not very nice shared apartment when in D.C.

Here’s what you need to know about Chuck Schumer net worth and how he makes his money:

As minority leader of the Senate, Schumer makes $193,400 each year. Prior to his current role, he made $174,000 the set salary for senators and members of the House of Representatives. Under Article I, Section 6 of the United States Constitution, Congress is required to set its own pay. The last time the salary was increased was in January 2009, when Congress increased their salary by 2.8% to $174,000. 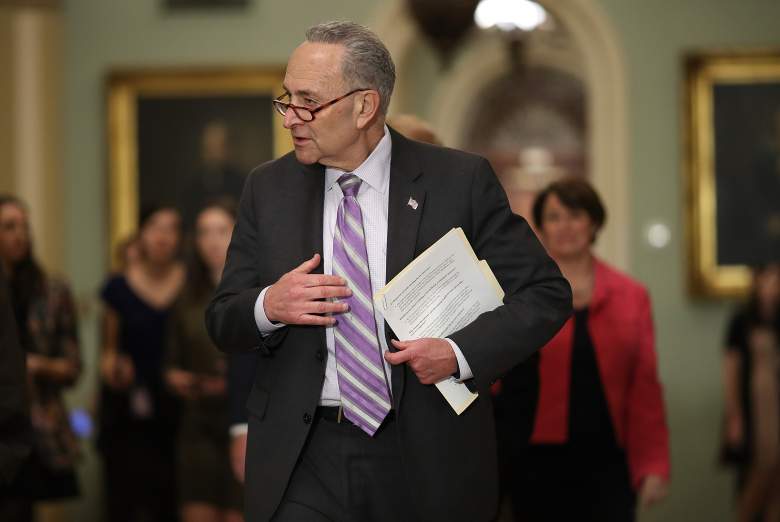 On his financial disclosure form for 2015, which was filed in 2016, Schumer lists his salary at $172,887. He also lists his wife salary as >$1,000 for her position at the New York Public Library.  Most of Schumer’s worth comes from his salary, which he’s been accumulating for nearly four decades. His current term ends in 2023.

Aside from his salary through the U.S. government, Schumer has a few investments. He has $75,000 invested in credit unions, $240,001 in a TIAA Traditional annuity, and $107,501 in Morgan Stanley Money Market Account. 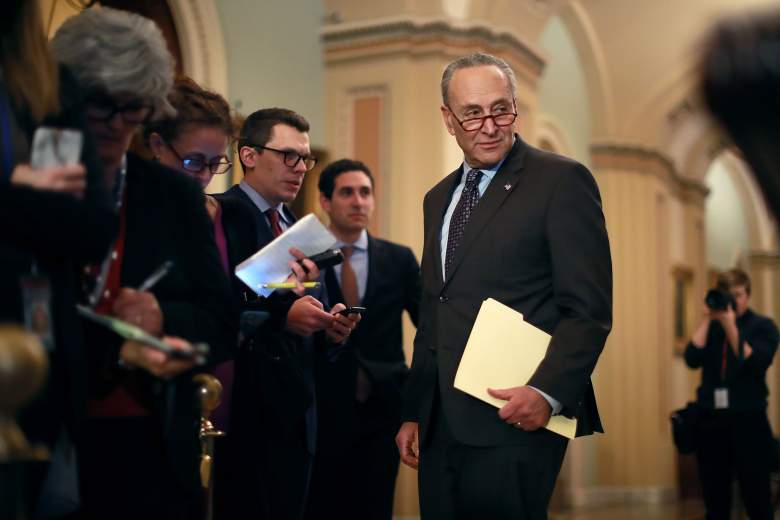 The credit unions making up the $75,000 include Congressional Federal Credit Union and Municipal Credit Union, according to his financial disclosure form for 2015, filed in 2016.

He also lists Teachers Retirement System Deferred Compensation for his wife in the range of $50,000 to $100,000. Lawmakers are only required to provide a range of value for assets and liabilities, not exact amounts.

3. He Raises More Than the Average Senator, Often by Over $10 Million 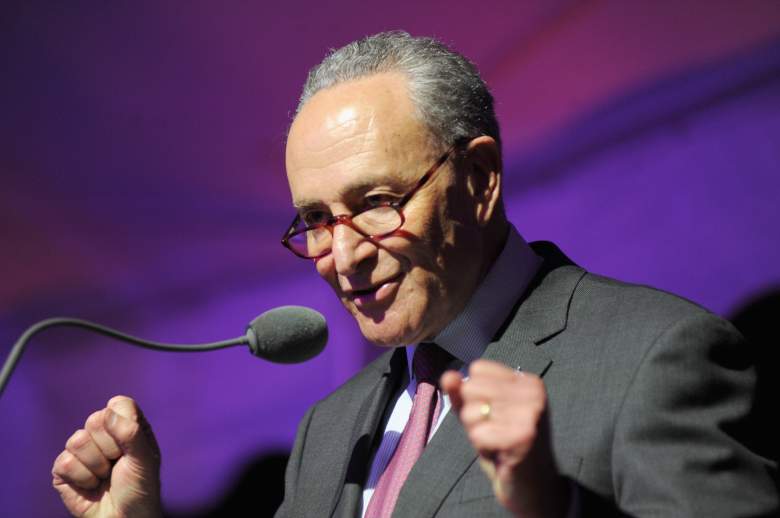 He has raised well above the average in campaign committee fundraising in most years. In 1998, the average raised by Senate members for a campaign committee was $2.1 million, and Schumer raised $12.8 million. In 2010, his biggest year, he raised $17.6 million and the average was $3.13 million. In 2016 he raised $17.18 million and the average was $3.52 million. 2018 could be an exception, or it could just be too early to tell. So far the average for 2018 is $3.2 million, and Schumer is at $582,880. Mother Jones states that Schumer has “netted more big bank money than any member of Congress who hasn’t run for president.”

Individual contributions make up 77.36% of his funds, followed by PAC contributions at 11.92%. Not all of the money Schumer raises directly benefits his campaign, especially in years when he is not running. For example, in January 2018 a fundraising event benefited Schumer, Joseph Donnelly, Jacky Rosen, and Beta O’Rourke.

4. He’s Led Bills to Help the Middle Class, and Is Required to Buy Healthcare Through the Affordable Care Act

Schumer was a leader in passing the Bipartisan Budget Act of 2018, a bill that he said would help the middle class in New York state and the rest of the country.

“This bipartisan and historic agreement is a major shot in the arm for middle-class families from Western New York to Staten Island all the way to the eastern end of Long Island,” he said. “The budget deal doesn’t have everything Democrats want; it doesn’t have everything the Republicans want, but it has what the American people need. It shows that bipartisanship still lives in Washington and that both parties can work together to address the issues affecting our nation. This deal includes funding to address the opioid scourge, fund Community Health Centers, improve infrastructure, address pensions, helps working families, makes childcare more affordable and gives our dairy farmers the support they need to stay competitive. I am proud to have worked with my colleagues across the aisle to secure this deal and will continue to fight for middle-class New Yorkers.”

Since 2016, he has also voted for disaster relief appropriation, voted in favor of a path to citizenship for individuals brought to the U.S. without legal permission, and for sanctions on North Korea, Iran, and Russia.

Schumer is a member of the “Gang of Eight,” a bipartisan group of senators who have been influential on immigration reform. Richard Durbin (IL), Robert Menendez (NJ), and Michael Bennet (CO) are the other Democrats in the group, and John McCain (AZ), Lindsey Graham (SC), Marco Rubio (FL), and Jeff Flake (AZ) are the Republicans.

‪Wherever you live in this country, get out there and make noise. Your voice stopped #Trumpcare once, we've gotta do it again. #VoteNoACHA ‬

As a member of Congress, Schumer is required to purchase healthcare through the Affordable Care Act exchange, and receives a federal subsidy for 72% of the premium. This is meant to fill in for the employer contribution workers in other sectors receive. Under the Federal Employees Health Benefit Program, members of Congress are eligible for lifetime health insurance once they retire.

Members of Congress also receive a pension, which can be lifelong and up to 80% depending on their age and length of service. The pension would come out to $139,200 annually, according to Investopedia. If a Congressperson dies while in office, their family receives a payout for a year of their salary, which for most members is $174,000. Other Congressional benefits include lifetime access to a Capitol gym, free parking at DC-area airports, and access to House and Senate floors and dining rooms.

5. His Home in New York Is Worth Hundreds of Thousands, but In D.C. He Sleeps In a Friend’s Living Room

In a 2010 New Yorker profile, Schumer told reporter Jeffrey Toobin that his apartment in Brooklyn was his main asset. He and his wife bought the home in 1982 for $157,000. Here’s a clip from the New Yorker profile:

“Now, remember, in 1982, interest rates were nineteen, twenty per cent, so housing prices were plummeting because no one was paying nineteen per cent,” Schumer said. “So we figured we would refinance. But we come into this place, we love this place, but it’s a hundred and fifty-seven thousand dollars. I’m making a congressman’s salary, which was probably thirty-five, she’s a low-level civil servant with the city government, and I say, ‘We can’t afford this. It’s too big.’ She says you always reach for real estate. So we stretched. We bought it for a hundred and fifty-seven thousand dollars. A few years later, we refinanced. Now it’s the only major asset we own, but it’s worth much more, probably ten times that.”

During 31 of his years working in D.C., Schumer lived in a house with other senators. CNN did a piece on the apartment, which it called a “frat-style house” for its peeling paint, small bedrooms, and ancient stove.

Schumer lived in the house with Senator Dick Durbin and Representative George Miller and slept in the living room. The house hasn’t been updated in 30 years and is owned by Miller, who rents it out. The residents reportedly eat cold cereal, have breakfast together, and try to avoid the rats that are a persistent issue. Omega House as the apartment is called inspired a show called Alpha House on Amazon (though in the show version the lawmakers are Republican).

“Has a done a lot for the Middle-Class!?” THAT is a joke! But I suppose if people could try to wrap their minds around the corruption, and the fact that they WANT to DESTROY the Middle Class, We pose the biggest threat to them, everything they have done AT LEAST since jobs began outsourcing from the United States has been about bringing an end to the Middle Class, Why you think Biden is trying to mandate vaccines for workers? So they will quit! The only way to bring in a NWO or Great Reset is to STOP freedom, This administration is a disaster and was never meant to be, and I can’t wait until it’s over!!!

2
wpDiscuz
1
0
Would love your thoughts, please comment.x
()
x
| Reply
Chuck Schumer is a multi-term Congressman and Senator and is currently the Senate Minority leader. His Net Worth is $0.5M