Kate Spade was born on December 24, 1962, in Kansas City, Missouri. After graduating from college, she got a job working for Mademoiselle Magazine and moved to New York City. Spade worked for the outlet for five years, and started to make a name for herself in the fashion world. She eventually moved up to become the magazine’s senior fashion editor and head of accessories.

After working at the magazine for five years, Spade left the magazine in 1991 to start her very own fashion line, teaming up with the man who would become her husband the following year, Andy Spade.

Kate Spade was found hanged in her New York City apartment on Tuesday, June 5, according to TMZ.

The fashion designer had an estimated net worth of $200 million, according to Celebrity Net Worth. She started her fashion empire back in 1993, launching one of the most popular fashion and lifestyle brands.

Kate Spade made the majority of her money when she sold shares of the Kate Spade brand to department-store giant Neiman Marcus in 1999.

Kate Spade was found hanged in her apartment on Park Avenue in New York City on Tuesday morning. Law enforcement sources told TMZ that Spade’s housekeeper found her body just before 10:30 a.m. Spade had hanged herself using a scarf affixed to her bedroom door knob.

Spade is survived by her husband, Andy, and the couple’s one daughter, Frances, 13. It is unknown if Spade had a will or if her daughter will inherit any of her mother’s money.

TMZ did report that Spade left a suicide note addressed to her daughter, Frances Beatrix.

2. Her Handbag Line Took Off & Became a Full-Blown Brand

In 1993, Kate Spade put her love and passion for design to work, starting her very own line of handbags with her soon-to-be husband, Andy Spade (the couple married the following year).

Over the past two and a half decades, Spade’s line evolved to include several products ranging from shoes and accessories to stationary. Her products were sold all over the globe in boutique shops as well as major department stores.

3. The Spades Began Selling Shares of the Company in 1999

Kate and Andy Spade were quick to capitalize on their growing brand, selling shares to a major retailer within the company’s first six years. It is believed that the two made the majority of their money at this time.

“In 1999, they sold a 56% stake to Neiman Marcus for $34 million. Then, in 2006, Spade and her two partners sold the remaining 44% to Neiman for a reported $59 million. Assuming the Spades split their share with partners, they would have walked away with $46.5 million before taxes,” Forbes reported.

About a week later, Neiman Marcus sold the company to Liz Claiborne “for a reported $124 million, including debt.”

4. Kate Spade Was Sold in 2017, But the Spades Didn’t Make any Money in That Sale

After enjoying wild success in the fashion industry, Spade decided to sell her company. In 2017, the fashion company was bought by Coach for a whopping $2.4 billion — money that Spade never saw. As previously mentioned in this post, the Spades sold their shares of the company several years ago.

The sale of Kate Spade to Coach was a good move for the latter, as the brand has seemingly struggling over the past few years.

“Under the terms of the deal…Kate Spade shareholders will receive $18.50 per share in cash. The transaction represents a 27.5% premium to Kate Spade’s shares before reports of a potential deal surfaced in December and a 9% premium to its last closing price. Shares of Kate Spade surged 8% in pre-market trading, while shares of Coach were basically flat,” Forbes reported shortly after the sale was announced.

Over the next several years, Spade enjoyed some time at home raising her young daughter, Frances.

“‘A lot of people didn’t realize that 56% of it had been sold in 1999,’ she [explained], adding that she wouldn’t trade the time with her daughter ‘in a million years’ for her brand back,” Moneyish reported last June.

She decided to return to work in 2015, launching a brand new line that she named Frances Valentine, inspired in part by her only child. The company is known for its shoes, but also carries a few handbags.

After launching Frances Valentine, Spade revealed that she had changed her last name to “Valentine.” She explained that she changed her name as a way to “distinguish the name, and separate the two worlds” of her past company and present, adding, “It kind of makes [me] sound kind of cool, like a rap star or something,” she told Business of Fashion in an interview last year.

“Frances Valentine is designed in New York City by Kate and Andy. The first prototype of each shoe design is made on a hand carved wooden last. Every pair of shoes takes two full days to complete. Handbags are custom-made with specially developed hardware, leathers, and fabrics to Kate’s exacting specifications,” reads a description of the company.

As for her decision to return to work, Andy Spade thought it was a good move — and that it made a good impression on the couple’s daughter.

“I think it’s a good example for my daughter to see her mother work. Not that she didn’t before, but to see her work [as a designer],” he told Business of Fashion. 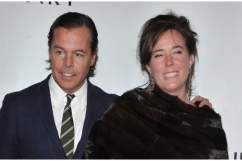