Burt Reynolds has died. The legendary screen star passed away Thursday afternoon at Jupiter Medical Center in Florida. He was 82.

“My uncle was not just a movie icon,” wrote his niece Nancy Lee Hess, “he was a generous, passionate, and sensitive man who was dedicated to his family, friends, fans, and acting students. He has had health issues, however, this was totally unexpected. He was tough.”

Reynolds’ iconic status, as well as his film success, has led many to wonder how much money he made. According to Celebrity Net Worth, he had an estimated net worth of $5 million. Read on to learn how the actor made his fortune and how he liked to spend it during her lifetime.

Reynolds was Hollywood’s biggest box office draw for five consecutive years between 1978 and 1982. Some of his most notable films during this period include The Longest Yard, Semi-Tough, Hooper, The Cannonball Run, Sharky’s Machine, The Best Little Whorehouse In Texas, and Smokey and the Bandit, which earned $300 million at the box office and was the second-highest grossing film of 1977 behind Star Wars.

During this time, Vanity Fair reports that Reynolds was earning an estimated $10 million a year. His real-estate portfolio included a 153-acre ranch in Jupiter, Florida; a spread in Arkansas; several mansions in Beverly Hills and Malibu; an estate in Georgia; and a mountaintop retreat in North Carolina. He also owned a private jet, a helicopter, and numerous sports cars, including a Trans Am that was used to promote Smokey and the Bandit.

When asked about his attitude towards money and success, Reynolds said he takes it all in stride. “I’ve lost more money than is possible because I just haven’t watched it,” he revealed. “I’ve still done well in terms of owning property and things like that. But I haven’t been somebody who’s been smart about his money. There are a couple of actors who are quite brilliant with the way they’ve handled their money. But they’re not very good actors.”

2. He Paid $15K In Monthly Support After Divorcing His Wife Loni Anderson

Reynolds was married twice. He was married to his first wife, actress, Judy Carne, from 1963 to 1965. His second marriage to actress Loni Anderson, which lasted from 1988 to 1993, ended in a bitter divorce that ultimately cost the actor millions. He accused her of cheating on him and she, in turn, accused him of domestic abuse.

According to Vanity Fair, Reynolds was forced to pay Anderson a whopping $234,794 in addition to the $15K per month to cover the mortgage on her $1.9 million house. These costs, coupled with the $47K a month Reynolds had spent on lawyers and divorce proceedings, reduced his net worth to $5 million by the end of the decade.

In a 2015 interview with PEOPLE, Reynolds said that marrying Anderson was a mistake. “I should have known that you don’t marry an actress,” he said. “That was a really dumb move on my part. She bought everything in triplicate, from every day dresses to jewelry to china and linens. I gave her a platinum American Express card with a $45,000 credit limit. She maxed it out in half an hour.”

Anderson’s net worth is currently at $12 million — more than twice that of her late ex-husband. They have one son together, Quinton Anderson Reynolds.

Reynolds’ divorce settlement was compounded by several other costly encounters. He partnered with friend Buddy Killen, a country-music mogul, to open a restaurant chain called Po’ Folks, which had over 30 locations in Florida, Texas, and Louisiana. “It sounded like a sure-thing deal,” Reynolds told Vanity Fair. “Honestly, I didn’t give it another thought until I found out that maybe it wasn’t such a sound investment.” The restaurants wound up costing the actor an estimated $20 million by the late 1980s.

By 1996, Reynolds’ debts had grown to such an extent that CBS sued him for failure to repay a $3.7 million loan he had taken out. He also owed money to a pair of major banks, three of the major talent agencies: CAA, ICM, and William Morris, and his ex-wife Anderson. Reynolds would go on to file for Chapter 11 bankruptcy protection that year, and listed $6.65 million in assets with debts totaling $11.2 million.

“I paid them,” Reynolds said, referring to the creditors. “That’s what broke me. I said to the business managers that I had at that time, ‘Pay them.’ And they said, ‘Well, you won’t have anything left.’ I said, ‘I don’t care. Pay them.’ ”

“I was just getting rid of a bunch of stuff I should have gotten rid of years earlier,” he told Vanity Fair. “Frankly, it’s embarrassing to have a house filled with giant portraits of yourself. I’ve already got more than enough of those, as you may have noticed.”

“I’m an old guy with a very large house,” he added. “So I’m just downsizing.”

Reynolds eventually sold off his Florida estate, often referred to as “Valhalla,” in 2015. According to Variety, Reynolds first put the property up for sale in 2008, when it was priced at $10.5 million. In the years that followed, however, the actor marked down the price from $4.9 million in 2014 to $3.3 million, which is how it eventually sold. The estate was 12,500-square-feet with five bedrooms, seven bathrooms, a 20-seat theater, billiard room, and a separate two-bedroom guesthouse.

“I’ve lost more money than is possible because I haven’t watched it,” he revealed to Vanity Fair. “I’ve still done well in terms of owning property and things like that. But I haven’t been somebody who’s been smart about his money.” 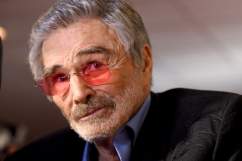