tonite.?? ✨ ? catch me doin a Facebook Live Q n A after @GetOutMovie screening. Watch around 11:30pm PST on facebook.com/snoopdogg #GetOut

Get Out has made a critical splash ever since it debuted at the Sundance Film Festival, earning rave reviews for its horror atmosphere and critique of black-white relations. “It’s The Stepford Wives for a micro-aggressive 2017 America,” writes Los Angeles Times critic Jen Yamato, “in which racism still lurks beneath a progressive smile, ignorant to its own existence.” Get Out is also drawing attention for its director, Jordan Peele, who completely sheds his humorous persona as part of the comedy duo Key & Peele.

On the sudden shift in direction, Peele told NPR that Get Out is “the only woke horror movie of all time, save for Night of the Living Dead (1968)… I feel like race has not been dealt with in my favorite genre which is horror. So I kinda wanted to fill the gap in that piece of the genre of conversation.”

Jordan Peele attends the Special Screening of “Get Out”, in Los Angeles, California, on February 10, 2017. (VALERIE MACON/AFP/Getty)

The film hits theaters worldwide on Friday (Feb. 24), but tonight, rapper, smoker, and all around entertainer Snoop Dogg, will be attending an advance screening in Los Angeles and holding a Live Q&A afterwards. Fans will be able to tune into Facebook and ask questions regarding the film, its chilling premise, or the societal implications it has on modern America.

The rapper is no stranger to creepy visuals, as can be seen in his new voodoo-inspired music video, “Legend.” 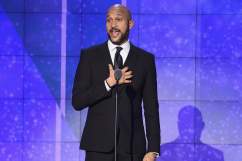