While she may only be 5’2″ in stature, Camila Cabello is making big moves. The singer has been on an upward trajectory ever since her split with Fifth Harmony in 2016, with many touting her as the next real-deal pop star. On paper, she has everything needed for solo stardom: the look, the presence, and the penchant for earworm melodies that are inescapable once they hit the radio. And based on the attention she’s been getting from tabloids and her label, Epic Records, there’s good reason to assume it’ll happen sooner than later.

Still, departing a successful act like Fifth Harmony can prove a risky decision, as its made up the bulk, if not all, of Cabello’s fortune. According to Salary-Net Worth.com, Camila Cabello now has an estimated net worth of $3.5 million. How did she make her money? And will she able to maintain it now that she’s solo? Read on to find out.

1. She Sold Half A Million Albums With Fifth Harmony

Most of Cabello’s net worth up to this point has been through Fifth Harmony sales. The group’s 2015 album, Reflection, debuted at number five on the Billboard 200, moving 80,000 equivalent units its first week. Reflection also spawned the top 20 single “Worth It” featuring Kid Ink, which became a certified triple platinum hit that helped the overall album reach Gold certification. As of 2017, the album has sold over 155,000 copies in the United States.

Sophomore album 7/27 (2016) achieved similar success for Cabello and fellow group members Ally Brooke, Normani Kordei, Dinah Jane and Lauren Jauregui. It debuted at number four on the charts, scoring 74,000 equivalent units week one and gifting the group with its highest charting single ‘Work from Home,” which hit number four on the Billboard Hot 100. Both projects, combined with their respective singles, have amassed over half a million albums sold in less than two years.

For Cabello, this time span resulted in a net worth boost of $2 million in 2014 to the whopping $3.5 million that it is currently.

On June 23, 2015, Kohl’s clothing brand proudly announced their collaborative deal with Cabello and the rest of Fifth Harmony. The group members were appointed as the spokeswomen of Kohl’s junior apparel brand Candie’s, and subsequently appeared in viral videos and social media promotions. “The line between commerce and social media is blurring fast,” said Unbound Commerce VP Wilson Kerr, “and Kohl’s seems to be hitting a marketing home run by linking the popularity of Fifth Harmony and their in-house brand.”

It is unclear whether the group will continue the endorsement into 2017, but it’s obvious that Cabello will be moving on without this paycheck.

4. She Donates to Non-Profit Organizations

When Cabello isn’t fending off sleazy offers or making news with Fifth Harmony, she donates her time and money to the non-profit group OMG Everywhere. The organization hosts free arts and crafts workshops for kids, as well as a musical tour called Get Well Soon, which Cabello contributed to in 2016. She and producer Benny Blanco joined forces to record a song with six youths from New York City, under the condition they not be able to use any instruments. As a result, the group gathered a bunch of materials ranging from a vacuum cleaner to a box of tissues! The final product, titled “Power In Me,” became a viral hit who’s proceeds went directly to OMG Everywhere.

Cabello also teamed up with Save The Children to design “Love Only” t-shirts that would increase group donations. Sold during October 2016, the shirts sold for $24.99, while a specialty shirt and hoodie combination sold for $39.99. Cabello has also used her stardom to raise funds for the Children’s Health Fund.

5. She Has Two Platinum Singles

“Fifth Harmony wasn’t the maximum expression of me artistically,” Cabello recently told Seventeen magazine, “My fans are really going to know me from the music I’m writing. My goal is to be brave and open up my soul.” Given these confident words, it’s obvious that Cabello is not concerned about making the jump from charismatic frontwoman to full-fledged star. And for good reason– she already has two certified platinum singles to her name.

Cabello teamed up with Shawn Mendes for “I Know What You Did Last Summer” in 2015, and the slow burn single eventually peaked at number 20 on the Billboard Hot 100. She followed that up with “Bad Things,” the Machine Gun Kelly duet that’s skyrocketed to number four on the Billboard Hot 100. These have not only bolstered Cabello’s reputation as a singer, but her bank account as well, as the latter single has sold 596,000 unites to date.

With her feature on the Cashmere Cat tune “Love Incredible” and her upcoming collaboration with Pitbull and J Balvin on The Fate of the Furious soundtrack, Cabello looks as though she’ll dominate the charts for the foreseeable future. We could easily see her $3.5 million net worth rise accordingly. 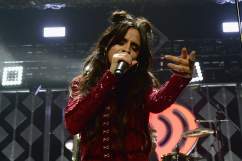