DJ Khaled is doing some merciless teasing on social media.

Roughly a week after debuting “Shining,” his collaboration with Jay-Z and Beyoncé, Khaled is back to work shooting the music video for his upcoming single “The One.” And based on the posts he’s uploaded to Twitter and Instagram, we can safely say it will be a star-studded affair.

Khaled has confirmed that “The One” will feature pop star Justin Bieber, recent Grammy winner Chance The Rapper, and at the very least, Migos group member Quavo. Given that additional members Offset and Takeoff also appear in a Khaled post, however, it could mean the entire trio are featured. Lil Wayne has also been confirmed to appear on the song, even though he is no present on the set.

No official release date has been set for the video’s release, or Khaled’s accompanying album, Grateful.

dj khaled at a video shoot with chance the rapper and migos today ? ? ? pic.twitter.com/8cegpm3LEk 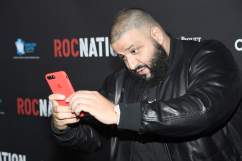