Despite only being 19, Florida rapper Kodak Black has already led quite the controversial career. In the last few months, Black has released a sex tape, been accused of being a homosexual, and proclaimed himself the best rapper alive, even going as far as to say he would beat up resident title holder Lil Wayne to prove it.

Now, to add to the continued controversy, Kodak Black is going to jail. The “There He Go” rapper has been booked and charged with violating his house arrest probation. There is an available copy of his mugshot circulating online (check out below).

Obviously, this isn’t the first time Black (born Dieuson Octave) has spent time behind bars. According to HNHH, he was arrested in Pompano Beach in 2015 and charged with robbery, possession of cannabis, and false imprisonment of a child. The following year, he was linked in connection to two other outstanding criminal warrants, including sexual assault, to which he pleaded no contest and ending up serving 120 days behind bars. He later paid a $100,000 bail according to Spin, and was released on the probation that he’s currently charged with violating.

According to Billboard, Atlantic Records issued a statement saying that Kodak Black’s planned “Back And Better” Tour dates are now postponed. 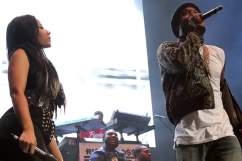