Rick Ross recently sat down with Billboard to discuss his upcoming album, Rather You Than Me, and it sounds as though the Miami rapper has a particular person he wants to address: Birdman.

Ross makes mention of a song titled “Idols Become Rivals,” and in it he says: “It’s basically me writing a letter to someone in the game that I looked up to damn near the most and I hate what things have come to.” He makes no specific mention of who the ‘someone’ is, but based on the tumultuous history that he and Birdman have shared over the years, the Cash Money mogul seems like the most obvious candidate.

The two were extremely close earlier in Ross’ career, and would often appear on hit singles together (“We Takin’ Over,” “Make It Rain (Remix),”100 Million” ). As of late however, things have undoubtedly soured. According to Rap-Up, Ross mocked the recent Cash Money Reunion in Miami, taking to Snapchat to insult both Birdman and Lil Wayne by saying “Them ni**as kiss and they made up,” and “Fuck ni**as wanna hit me / Fuck, ni**a, come get me / Pussy ni**as ain’t wit me.”

Birdman responded during a show long not long after, threatening Ross: “I’ma pull up, and I ain’t gon pull up talking, believe that.” He also added that he “doesn’t give a f*ck about Ross” in an interview with Ebro In the Morning. Check it out here.

If Ross is indeed aiming at Birdman on “Idols Become Rivals,” he will certainly have lots of material to pull from. The album is set for release on Read the full interview with Billboard here. 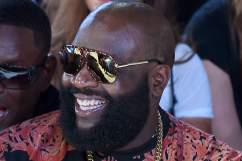