The 1975 aren’t afraid to poke fun at anyone, especially when it comes to the critics.

During their performance at the 2017 BRIT Awards, the rock group staged massive signs behind them that pulled quotes from some of their most scathing musical reviews. In what proved both a brilliant publicity stunt and a perfect way to capture the group’s rebellious, unfazed attitude, lines appeared like “terrible high-pitched vocals over soulless robo beats,” and “I only heard ‘Chocolate‘ once, but I hated it,” in reference to 2013 single.

There were also screens consisting of only one word, like “terrible,” or “annoying.” Some viewers were shaken by the negative comments, but it was confirmed that the band orchestrated the self-bashing intentionally. Check out some of the highlights and full performance below.

Few bands would put bad critic's quotes into an awards performance. That's why we love @the1975 #BRITs #the1975brits pic.twitter.com/ruPIDsOJGN

All the people who said that the 1975 didn't deserve to win pic.twitter.com/TQd6N75msm

Those familiar with The 1975 have seen the group did this sort of thing before in the music video for “The Sound,” and found it especially humorous that some though their performance had been hacked:

Me laughing at the people who actually thought @the1975 got hacked at the #BRITs2017 #the1975 pic.twitter.com/EchpQGwnYU

Besides causing mass confusion, The 1975 also won the “Best British Group,” as their sophomore album I Like It When You Sleep for You Are Beautiful Yet So Unaware of It debuted at number one on the UK Album Charts and the US Billboard 200 in 2016. The album was led by the singles “Ugh,” “Love Me,” and “The Sound,” which peaked at number 15 on the UK Singles Chart and number nine on the US Hot Rock Songs Charts.

The 1975 is also up for British Album of the Year. 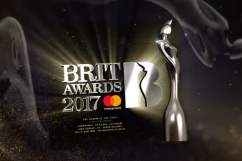