After a breakthrough 2016 that included two top five hits on the Billboard Hot 100 and a Grammy Award for Best Dance Recording, The Chainsmokers are back and prepping their major label debut, Memories… Do Not Open. Their latest track, following the release of the January single “Paris,” is titled “Something Just Like This,” and finds The Chainsmokers teaming up with iconic British band Coldplay.

Group members Drew Taggart and Alex Pall told Heavy that the process of collaborating with Coldplay was a thrilling one. “We had heard through the grapevine that Coldplay listened to our music sometimes before they went on stage,” they explained, “So we reached out with the big old question mark about potentially working together.” Coldplay frontman Chris Martin was ecstatic over the idea, and a few short months later, both groups were in the studio and formulating the collaborative effort that would become “Something Just Like This.”

Chris Martin performs with The Chainsmokers during the BRIT Awards ceremony in London on February 22, 2017. (Photo by JUSTIN TALLIS/AFP/Getty Images)

“Obviously it took some tinkering and stuff but working with Coldplay was incredible,” said Pall, “Chris and the band are such visionaries and they bring the same warmth in their music as they do to this project.” They master plan was to keep the collaboration a secret to premiere at the 2017 BRIT Awards, while simeoutaneously releasing the single online. “When we talked about this plan it seemed so ridiculous,” Pall added, “I think Drew and myself both half heartedly believed it, but here we are mission accomplished!”

Memories… Do No Open is scheduled for release on April 7 and is currently available for pre-order on iTunes. Check out their performance at the 2017 BRIT Awards below. 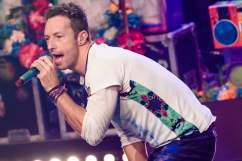