The NYC rapper, who just released her joint album with Fat Joe, Plata O Plomo, has now dropped a new track called “Shether” where she aggressively attacks Minaj’s status as the queen of hip-hop.

The title and beat is a nod to “Ether,” the classic Nas song that dissed Jay-Z in 2001, and Remy Ma takes a similarly brutal approach here. “You stole that line about b*tches being your sons/How you take my ’09 jail tweet and run,” she raps, before going on to mock with the line, “Talkin’ ‘bout bringing knives to a fight with guns/When the only shot you ever took was in your buns.” Remy Ma also claims that Hot 97 radio host Ebro slept with Nicki Minaj, and proceeds to borrows a snippet from Beyoncé’s cover of “Darling Nikki,” where the pop star sings “I met a girl named Nicki/I guess you can say she was a rap queen.”

Minaj response to the record has been erratic and angry, taking to social media to criticize Remy Ma’s album sales and her relevancy in rap (or lack thereof), before hopping on a live feed for a few seconds without directly addressing the diss:

Not surprisingly, Twitter fans flocked to the news, and offered their thoughts on Remy Ma’s scathing takedown of Minaj. The general consensus? Minaj got bodied.

Nicki Minaj in the crib after hearing that remy ma diss track pic.twitter.com/vXxi21IW7G

Minaj got into an argument with singer Trey Songz shortly after “Shether” was released, and fans have been quick to point out that while she was quick to respond to Songz (with tweets that have since been deleted), she has yet to comment on Remy Ma or the diss track itself.

@RedCafe RT @ChocoSimba_: Nicki Minaj tryna figure out which one of her voices to respond back with ? pic.twitter.com/FY6CJ3vZwm

Nicki Minaj trying to figure out how she's going to respond to Remy Ma within the next 48 hours & if she can top 7 minutes of SHADE #Shether pic.twitter.com/jSoVkRxuol 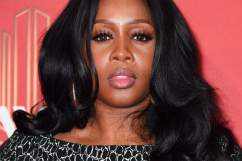