The Atlanta rap trio has been on a roll as of late, with a shout out from Donald Glover (aka Childish Gambino) at the 2017 Golden Globes, and their latest album, Culture, which debuted at number one on the Billboard 200 and the Top R&B/Hip-Hop Charts. Now, rappers Quavo, Offset, and Takeoff have continued this rise with a performance of their lead single “Bad and Boujee” on Ellen.

“Bad and Boujee” is currently “the hottest song in the world,” according to host Ellen Degeneres, and Migos took to the daytime talk show to deliver an energetic, vivacious performance that quickly got the crowd dancing along. There was also some surprise surrounding the Offset lyric “thot, thot, thot,” which went uncensored on the broadcast, despite being an acronym for “that hoe over there.” Click below to watch the full performance.

“Bad and Boujee” peaked at number one on the US Billboard Hot 100 and US Hot R&B/Hip-Hop, where internet memes and the popularization of the phrase “rain drop, drop top” helped the single achieve platinum certification.

This isn’t the first time Migos and Ellen have crossed paths.The group can also be seen opposite Ellen, Ty Dolla $ign, Big Sean, and Lin-Manuel Miranda in “Read It,” a promotional rap song meant to promote learning for second graders in North Carolina.

Last week, a video surfaced online that showed Ellen and Migos interacting backstage, where the TV personality was legitimately shocked by the amount of cash Migos carried on their person. Check out the hilarious video below. 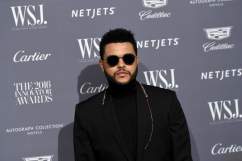 WATCH: The Weeknd links up with Drake, YG, and A$AP Rocky in New ‘Reminder’ Video