Saint Patrick’s Day, also known as the Feast of Saint Patrick, is a time to celebrate all who are Irish. And though it is only a legal holiday in Suffolk County, Massachusetts, the rest of the United States has been quick to get in on the fun. Exuberant amounts of green, lots of eating and drinking, and, of course, an appreciation of Irish and Irish American culture and the legend of Saint Patrick, who is the patron saint of Ireland.

With that being said, it is also a time for those of Irish-American descent to embrace their heritage and celebrate. Many celebrity figures are known for their prominent Celtic roots, among which include Van Morrison, Bono, Sinead O’Connor and Ed Sheeran. Still, there are many whose heritage is less obvious, and perhaps even unknown to the public. Learn who the most surprising of these are below.

While Christina Aguilera may be know for her Cuban ancestry, the singer was actually raised by her Irish mother, Shelly Loraine, after she and Aguilera’s father divorced. “A lot of people get all in a fuss about Christina wanting to explore her Latin side and not mentioning her Irish side much, but that’s only logical,” Loraine told Free Library in 2001, “She was raised in an area which was predominantly Irish her whole life. I was a single mother raising her with my mom, Delcie Dunfee, who comes from Co Clare.”

Loraine also went on to reveal that “I then married an Irish American. Irish customs have always been a big part of our lives, so she had no need to go exploring them. For example, we’d put candles in the windows, especially at Christmas, as a symbol of welcome to Mary and Joseph. This is a totally Irish custom. And we’d decorate the house for St. Patrick’s Day with shamrocks and leprechauns.” As for where Aguilera herself stands on her ethnically diverse makeup, she says that she’s “a little mixed up and proud of every part of it.”

While he was born and raised in the United States, Kurt Cobain‘s family actually hail from Northern Ireland. According to Irish Central, his ancestors Samuel and Letitia Cobane (the spelling was changed after their emigration) decided to leave their Irish farm of five generations to start a new life as shoemakers in Washington. This lineage was actually unknown to Cobain for most of his life, and it was only after began touring with Nirvana that he began to learn about his family. When the iconic rock group performed in County Cork, Ireland, Cobain explained that the area gave him a distinct feeling of kinship.

“It was the weirdest feeling and I have a friend who was with me who could testify to this,” he said, “I was almost in tears the whole day. Since that tour, which was about two years ago, I’ve had a sense that I was from Ireland.” Listen to the clip above to hear Cobain discuss his Irish heritage further.

Macklemore, born Benjamin Hammond Haggerty, was born in Washington in 1983. His parents, Bill Haggerty and Julie Schott, were both Irish, and encouraged their young so to pursue his dreams of becoming a rapper. Obviously, the support proved impactful, as Macklemore has since gone on to become one of the most commercially successful hip-hop artists currently working. With monster hits like “Thrift Shop,” “Can’t Hold Us,” and “Downtown,” he and producer Ryan Lewis convey positive messages that unite people of all creeds and colors.

That being said, Macklemore has never lost sight of his Irish heritage. The most prominent example of this is “Irish Celebration,” the 2010 single that finds him paying homage to his Gaelic homeland. Released as part of The VS Redux EP, Macklemore raps lines like “My heritage, proud to be a Haggerty,” with unabashed pride. “The song is about celebrating life,” he told Rap Ireland, “It celebrates my ancestry and culture.” Check out the video above.

Mariah Carey‘s music– a meld of throwback R&B and sugary pop– speaks to her diverse upbringing. Her father, Alfred Roy, is African American and Venezuelan, while her mother, opera singer Patricia Carey, is in fact Irish-American. Carey discussed her little-known heritage with The Guardian in 2009, explaining that “My mother’s white– she’s so Irish, she loves Ireland. She’s like ‘Yay, Ireland!’ Waving the flag and singing ‘When Irish Eyes Are Smiling.” This meld of different identities was a burden to the singer growing up, as she went on to say “I understand people want to hold on to their roots. But for me, I was a complete nonentity because of it. Maybe that was part of my drive to succeed. I’ll become accepted.”

Fortunately, for both Carey and her mother, her Irish roots are something she’s grown to be proud of into adulthood. “It’s great,” she said, “I appreciate and respect it.” According to Entertainment Tonight, Carey even rocked a bright green dress for St. Patrick’s Day last year. You can watch Mariah and Patricia perform together during the 2010 ABC Christmas Special above.

As a former Beatle and one of the greatest songwriters of all time, Paul McCartney is familiar to all. His Irish ancestry, on the other hand, not so much. The singer was born to James and Mary McCartney in 1942, both of whom descended from Irish immigrants, and raised him as a Catholic in Liverpool, England. This ancestry would go unmentioned for a great many years, especially during his time with The Beatles, but once McCartney went solo, he embraced it wholeheartedly.

According to Irish Central, McCartney and his wife Linda wrote “Give Ireland Back to the Irish” in 1972, which was a response to the Bloody Sunday massacre in Northern Ireland. Recorded with McCartney’s band Wings, the song caused a great deal of controversy in Britain, where it was banned for being “too inflammatory.” Despite this, “Give Ireland Back to the Irish” soared to number one on the singles charts in Ireland. “From our point of view,” said McCartney, “It was the first time people questioned what we were doing in Ireland.”

The singer would later marry his second wife, Heather Mills, in Ireland in 2002. 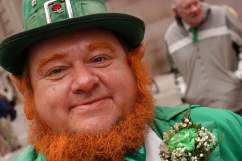