According to MediaTakeOut, rappers Nicki Minaj and Nas are starting to get extremely close.

A source for the website reports that “Nicki and Nas have been close for a long time. Ever since working together [on the “Right By My Side” video] they’ve always had a cordial relationship. When they worked together, Nicki was with [Meek Mill], and so nothing went down. But as soon as Nicki announced that she was single, Nas hit her up.” The source also mentioned that “They’re still early in their relationship, and Nas is still courting her. But Nicki’s already got feelings for him.”

Swipe to see? – I Listened again this morning & changed the order a bit. Moved up KoolGRap & #FirmBiz ended with #StackBundles its absolutely perfect now. PROMISE!!!!!! Listen on Tidal to my very own playlist #QueensGotTheCrown It's ???????????????

HNHH also says that Nicki and Nas are rumored to attend SXSW together on Thursday, which would all but confirm their romance to the public. Are we looking at the next power couple in hip-hop? Watch their “Right By My Side” video below. 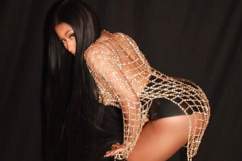