Chance’s 2017 continues to be on display as the Chicago artist piles up accolades, he’s also become the target of some gossip. Yesterday the Chicago Sun-Times released a scathing article claiming Chance and his partner Kirsten Corley were having issues reaching a child-support settlement. 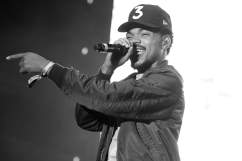 In an article titled “Child-support spat could hurt Chance the Rapper’s image” writer Mary Mitchell opens the article saying “I don’t want to go hard on Chance the Rapper because he’s one of the good guys. But his messy split from the mother of his 18-month-old daughter threatens to overshadow the positive vibes created by his $1 million donation to the Chicago Public Schools.”. Mitchell goes on to make the assumption that if not handled correctly in the public eye Chance the Rapper’s image could take a hit.

This all comes after Chance’s announcement on Monday to donate $1million to Chicago Public Schools. Chance’s donation was a call to action after meeting with Governor Rauner of Illinois last week to talk about funding for the Chicago education system. In an interview after their meeting Chance said that Rauner gave him a lot of “vague answers”.

In perfect fashion Chance the Rapper responded to Mitchell’s article with Kirsten and his 18-month daughter a video. The short video tweeted out by @theshaderoom has Chance reminding his fans not to worry about what critics are saying and ends the short video by saying “sometimes get the f*ck back”.

Twitter responded in by supporting Chance the Rapper and calling Mitchell into question.

@Suntimes @MaryMitchellCST NO. He’s taking care of his child. This is misleading and a slander of @chancetherapper‘s character. ??

The @Suntimes/@MaryMitchellCST hit-piece on @chancetherapper attempts to take the focus away from how the gov isn’t funding Chicago’s kids.

Next week the emcee will be the cover story on Complex.