Demi Lovato is the latest female celebrity to have private photos find their way online.

According to The Sun, the photos that have surfaced over the last week are of Lovato lying in bed and smiling while wearing an unzipped top, or simply nude without showing her face. Others include Lovato in bed with Wilmer Valderrama, whom the singer dated from 2010 to 2016. As The Sun reports, the unnamed cyber-criminal released a statement with the photos that reads: “The collection I have show some nude, including face, some including parts of the body Demi is known for — tattoos, butt, chin. Then, I have pictures of her getting rowdy… I can guarantee you these photos are legitimately of Demi.”

This is not the first time Lovato has dealt with a leak scandal. In 2014, the singer was one of many who were targeted in the mass attack on celebrities’ iCould accounts for pornographic sites. Lovato’s representatives have yet to comment on the supposed hack, though she was reportedly seen out and about on Tuesday looking noticeably shaken.

UPDATE: Lovato has responded to the leaked photos on Twitter, saying that “I love how everyone’s freaking out about one picture. Its not nude and its just cleavage,” she writes, referring to the photo of her with an unzipped shirt on. Check out the tweets below.

I love how everyone's freaking out about one picture. It's not nude and it's just cleavage ?

Besides the world has seen me nude BY CHOICE before.. #vanityfair #nicetry #cleavagegameonpoint #myboobsarenteventhatbig #angles ??? 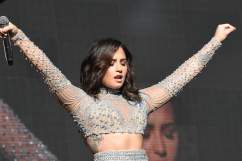 Is Demi Lovato Retiring From Music?

Read more about the Demi Lovato photo leak in Spanish at AhoraMismo.com: