Drake is an expert when it comes to subliminal disses. He rarely uses the names of his enemies, preferring instead to take cryptic jabs, and hint at those who dare to call him out. And with More Life, the 22-track playlist he released on Saturday, this tradition lives on.

Scattered amidst the breezy Caribbean rhythms and self-reflective lyrics, Drake takes aim at those he’s had beef with, both recently and historically. So, with this in mind, we took a careful listen to More Life and compiled every celebrity figure that gets caught in Drizzy’s crosshairs.

Jay-Z and Drake have engaged in one of hip-hop’s ultimate cold wars. Not much has been directly said about their chilly relationship, but their subliminal responses to each other have become something of a tradition. Drake keeps things going on the posse cut “Portland,” where he pokes fun at Jay’s age and status in the rap game. “Fake f*ck with me back then,” he spits, referring to the songs that they’ve done together in the past, including “Light Up,” where Jay warns Drake of those who are phony. “But its getting harder for you to fake it now,” he continues, “F*ck bein’ rich when I’m forty man, I’m tryna make it now.” This is a response to Jay’s lyrics on the song “Shining,” where he talks about not being more successful than Drake with 12 platinum albums. Drizzy is saying that he’s not going to wait until he’s in his 40s (Jay is 47) to become wealthy.

Meek Mill is the most prominent of Drake’s targets, as he’s referred in the songs “Free Smoke, ” and “Can’t Have Everything.” On the album opener, Drake drops jabs at his old foe, asking “How you let the kid fighting ghostwriting rumors turn you into a ghost?” Drake goes on to clown Meek, rapping “Oh you n*ggas got no jokes.” Drake takes another jab at Meek and his hometown of Philadelphia on the song “Can’t Have Everything.” Amidst his mid tempo meditation on life’s finer things, he raps “Finally got my n*gga in a free state/n*ggas tried to serve me a cheesesteak/I gave ’em back a clean plate.”

The Toronto spitter has had a rocky relationship with Drake, dating back to when his debut in 2010. Lanez has poked fun at Drake on several occasions, whether on social media, his projects, or radio interviews. Not one to ignore the critique, Drake responded on the song “Summer Sixteen,” rapping how “All you kids in the ‘New Toronto’ wanna be me a little.” Now, it looks as though Drake feels some type of way about Lanez, as he throws a subliminal at him on the song “Sacrifices.” He raps about a “Couple n*ggas from the city/Wishin’ on a star, could they be like Drake/Sorry no, not today/You gotta find your own way.” According to Genius, the lyrics are aimed at Lanez and fellow Toronto rapper, Mo-G, who also called out Drake in 2016.

Nicki Minaj‘s falling out with Drake can be dated back to a few years ago, when she started dating Meek Mill. The labelmates seemed to no longer be in touch, but in the wake of Minaj’s breakup with Mill, things have changed. The pair have posted pictures of themselves in the studio, and Drake even dropped a guest verse on her diss record “No Frauds.” Still, things seem somewhat strained, based on Drake’s lyrics in the song “Ice Melts.” On the Young Thug-assisted track, Drake raps “Look, I want you to myself/But I know you just left someone else/I know you did/He did a number on you/That must be why you move so icy.” He goes on to call her “Icy like 1017,” in reference to Gucci Mane’s l 1017 Brick Squad gang, who are known for their outlandish jewelry. Drake is saying Minaj has been cold to her since their reunion, despite the fact that he wants to be closer with her.

The XXXTentacion beef stems from the claim that Drake stole his rap flow for the song “KMT” featuring Giggs. “It’s funny how the industry let this p*ssy n*gga sit at the top,” he wrote on Twitter, “All y’all suck, kill yourselves.” And despite Drake’s claim that he had never heard of XXXTentacion prior to these claims, the internet still felt he might’ve done some lowkey biting. This is addressed again on the song “Portland,” which features Migos frontman Quavo and Travis Scott. Drake raps “Bitin’ everybody, which is ironic ’cause your next album probably won’t even see the light of day.” According to Genius, the lyrics carries a double entendre, as “bitin” refers to both the hip-hop slang for “stealing” and evokes the image of a vampire, which must feed off of others to survive. Balls in your court, XXXTentacion.

Drake and Diddy have had their spats in the past, with a nasty club scuffle and a claim that Drake stole the “0 To 100/The Catch-Up” beat being among the most public. Drake mocked Diddy’s famous flow and laugh on the freebie cut “4PM In Calabasas,” but this snide line in the song “Can’t Have Everything” is also reportedly aimed at the Bad Boy founder. “Never met myself, don’t remember who I was face,” he rhymes, clowning Diddy for his countless name changes over the years (Puff Daddy, P. Diddy, etc). Some fans disagree with the sentiment, but others are convinced that Drake is throwing shade at Diddy. Check out the Genius annotation here.

Look who rolled up to my show tonight to say hi!! @champagnepapi #lovehim #jlovegas #ALLIHAVE

The track “Teenage Fever,” which borrows the chorus of Jennifer Lopez’s 1999 hit “If You Had My Love,” finds Drake reflecting on their brief, rumored romance. “Your heart is hard to carry after dark,” he raps, “You’re to blame for what we could have been/cause look at what we are.” Given that Lopez has recently started a relationship with MLB star Alex Rodriguez, this might be hinting at the fact that Drake feels she is at fault for things falling apart. The title, “Teenage Fever” also carries a double-meaning, as it refers to the eager feelings he initially had in the relationship and the fact that Lopez was actually his teenage crush. Ironically, Lopez was dating Diddy, another Drake target, when “If You Had My Love” was released. Read more about the song here and listen to the full More Life project below. 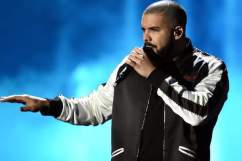 How to Stream & Listen to Drake’s ‘More Life’